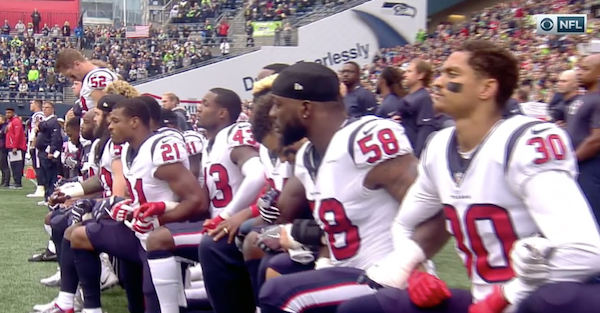 Following controversial comments from their owner this week, nearly the entire the Houston Texans took a knee during the national anthem as a form of protest prior to Sunday’s game at the Seattle Seahawks.

The demonstrations comes after transcripts were released from a recent NFL owners meeting, where Texans owner Bob McNair used the phrase “inmates running the prison” when referring to players and the ongoing protests.

Several players across the league were upset by the comment, feeling that they merited more respect than that expression. Obviously Texans players were extraordinarily upset, with players considering walking out of practice as a response. One player, DeAndre Hopkins, did indeed miss practice because of the comments.

The outrage was enough that McNair released this statement as an apology on Friday.

“I regret that I used that expression. I never meant to offend anyone and I was not referring to our players. I used a figure of speech that was never intended to be taken literally. I would never characterize our players of our league that way and I apologize to anyone who was offended by it.”

Considering the litany of protests that have already occurred this season, this potential one by the Texans will only add another layer to what has been a bizarre political situation in the NFL over the past 14 months.