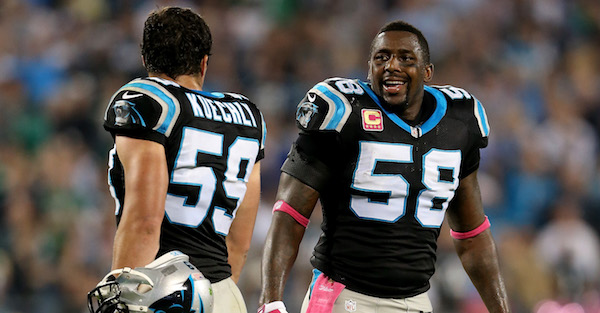 The 2018 NFL season will be the last for Carolina Panthers linebacker Thomas Davis.

Davis, 34, told NFL.com’s Brooke Cersosimo that he plans to retire after the 2018 season with the Panthers, and he’s spent his entire 13-year career with the franchise.

Story posting on https://t.co/iLSuC0HswN: #Panthers LB Thomas Davis told our @BCersosimo that 2018 will be his final NFL season. … He'll be in studio this weekend.

Davis was drafted 14th overall in the 2005 NFL Draft out of Georgia after an All-American career with the Bulldogs.

He tore his ACL three different times, and he became the first professional athlete to return and play after three ACL tears. After his return, he was a Second-Team All Pro in 2013 and First-Team All Pro in 2015 while helping the Panthers reach the Super Bowl.

Davis and linebacker Luke Kuechly formed one of the best linebacking tandems in the league over the last few seasons. He was also named the Walter Payton Man of the Year in 2014, and he made the Pro Bowl in 2015 and 2016.

Davis has 13 interceptions and 18 forced fumbles in his career, and he’ll be difficult to replace for Carolina after the 2018 season.