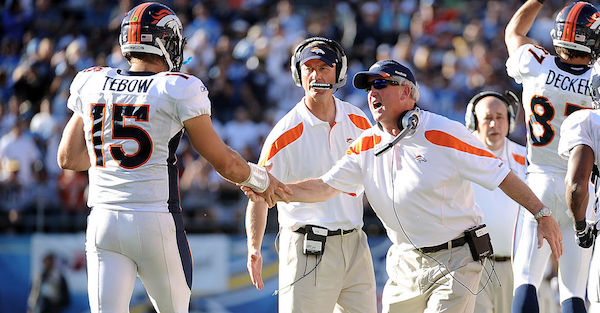 It feels like it was decades ago, but Tim Tebow was once a first round draft pick by the Denver Broncos. Tebow’s career didn’t exactly pan out, but he did lead the Broncos to the playoffs in John Fox’s first season as head coach in 2011.

Fox is now the head coach of the Chicago Bears, and the team traded up one spot in the NFL Draft to select quarterback Mitchell Trubisky with the No. 2 overall pick.

According to the Chicago Tribune, Fox wants to use the same plan for Trubisky as he used with Tebow in terms of developing him as a young QB.

“I?ve been around situations like that before, back in my time at Denver even with Tebow,? Fox said. ?We?re going to do whatever we can. As coaches, we got to put guys in positions where they can utilize their skill set, and it won?t be any different this year.”

Related: Chicago apparently wasn?t the only team trying to trade for Mitchell Trubisky

Though the Bears traded up for Trubisky, they also signed former Tampa Bay Buccaneers QB Mike Glennon in the offseason.

Glennon signed a three-year, $45 million deal with the Bears, though the franchise can opt out after one year. Glennon will make at least $18.5 million for the contract, but it seems like the Bears plan for him to be a lame duck quarterback while they patiently bring Trubisky along next season.

The comparisons to Tebow might not sit well with some Bears’ fans given Tebow’s struggles in the NFL, but it’s probably for the best that they don’t rush Trubisky into any playing time.

The Bears aren’t expected to be a playoff contender in 2017, so they can be patient with Trubisky and plan for the future.