It's been a long, long time since the Dallas Cowboys last won a Super Bowl. Owner Jerry Jones was on the brink of building a long-lasting dynasty in the 1990's similar to Bill Belichick's New England Patriots. What's transpired in that near quarter of a century in Arlington, Texas, has been mostly, well, disappointment.

Dallas' mini-dynasty, which included Super Bowl titles in 1992, 1993 and 1995, was set up by head coach Jimmy Johnson thanks to the most lopsided trade in NFL history with the Minnesota Vikings that netted them a slew of NFL Draft picks. The Cowboys had Hall of Fame talent everywhere you looked. Troy Aikman threw the passes. Emmitt Smith took the carries. Michael Irvin caught the touchdowns. Even Deion Sanders was pried away from San Francisco in 1995.

Those are the names that come to mind when you think of the Dallas Cowboys. But there's one other in consideration for the Mount Rushmore of all-time Cowboys: Tony Romo.

And what better of a player to encapsulate the Cowboys since their heyday than the man who committed the biggest blunder in franchise history?

We all remember the scene. A 26-year-old Romo sat with his head down and his hands clenching his face mask. In his first playoff game as the Dallas Cowboys starting quarterback, the four-year veteran fumbled the snap on what would've been a go-ahead 19-yard field goal for kicker Martin Gramatica with just over a minute to play in the fourth quarter of Dallas's 21-20 loss to the Seattle Seahawks in the 2007 NFC Wild Card game.

It was a chip shot. Basically an extra point. Romo had done this a million times. It was routine.

Romo tried picking up the ball and running it himself into the end zone, but he was tackled from the behind by safety Jordan Babineaux. Like that, Romo was the laughing stock of the NFL. Seahawks quarterback Matt Hasselbeck, whose 37-yard touchdown pass to Jerramy Stevens gave them the lead, became the hero.

Despite any statistic, accolade or record that proves otherwise, the Cowboys quarterback was known from that point forward as a choke artist. Romo's fumble will forever haunt Dallas because of what could've been. Before attempting the field goal, for example, Jason Witten caught a pass on third-and-7 that was initially ruled a first down at the one-yard line. Upon a replay review, officials concluded he was down a yard short, forcing the Cowboys to line up for a field goal.

It's not crazy to think Romo's miscue changed the direction of the franchise. 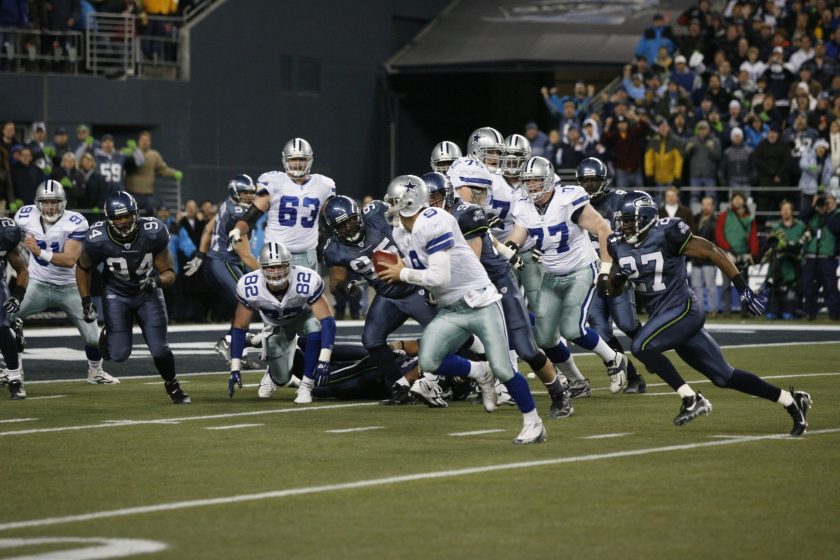 Dallas didn't win the NFC East that year -- the Philadelphia Eagles did. But had the Cowboys won that game against Seattle, a matchup against the Chicago Bears lied ahead. Rex Grossman (who threw 23 touchdowns and 20 interceptions that season) led a beatable Chicago team all the way to Super Bowl XLI, which they lost 29-17 to the Peyton Manning-led AFC champion Indianapolis Colts. Romo beat Manning that year during the regular season.

The Cowboys head coach at the time, Bill Parcells, decided to retire following the loss. Maybe a win changes the two-time Super Bowl-winning coach with the New York Giants' mind and he leads America's Team to a title unlike Wade Phillips or Jason Garrett.

As for Romo, he took the Cowboys to just three playoff appearances over the next nine years and never held up the Lombardi Trophy. Sure, he didn't win a whole lot of playoff games (he was 2-4 in the postseason), so maybe saying he wasn't clutch is a fair take.

But here's a statistic to consider: Romo had a better career passer rating in the playoffs than Tom Brady, Troy Aikman, Peyton Manning, Brett Favre and Steve Young. How's that for elite?

Romo's playing days are over. The Cowboys have moved on to a new era, one led by Dak Prescott and Ezekiel Elliott. NFL fans will praise Romo for his incredible insight in the booth as an analyst, as they should.

But maybe they should give him a little more credit for his on-field work, even if his most memorable play is a fumbled snap.

MORE: Tony Romo's Net Worth: How Football & Broadcasting Made Him Rich