Kansas City Chiefs tight end Travis Kelce didn't waste any time bursting onto the scene as one of the NFL's best receiving tight ends. Selected in third round of the 2013 NFL Draft, Kelce was just 25 when he led his team in receiving yards in 2014. The Pittsburgh Steelers, Cincinnati Bengals and Las Vegas Raiders all missed out on a generational tight end talent in a big, big way.

Since then, the University of Cincinnati product has logged more receiving yards than any other tight end in the league and caught 69 touchdown passes, not including the playoffs. The Chiefs star can thank teammate Patrick Mahomes for helping him reach those numbers.

The Super Bowl champion is also an eight-time Pro Bowler and three-time first-team All-Pro. The 32-year-old just so happens to be in the prime of his career having broken the single-season receiving yards record by a tight end last year and recording his sixth-straight 1,000-yard season. He's also a first-ballot Hall-of-Famer at activities like dropping F-bombs on live TV and drinking beer out of the Lombardi Trophy.

Travis Kelce is a catch off the field, too. The fashion-forward, freshly shaved fella makes more than $14 million per year, owns an estimated net worth of $20 million and even starred on a dating show to find love.

However, that's not how the Chiefs superstar landed his girlfriend of more than three years. 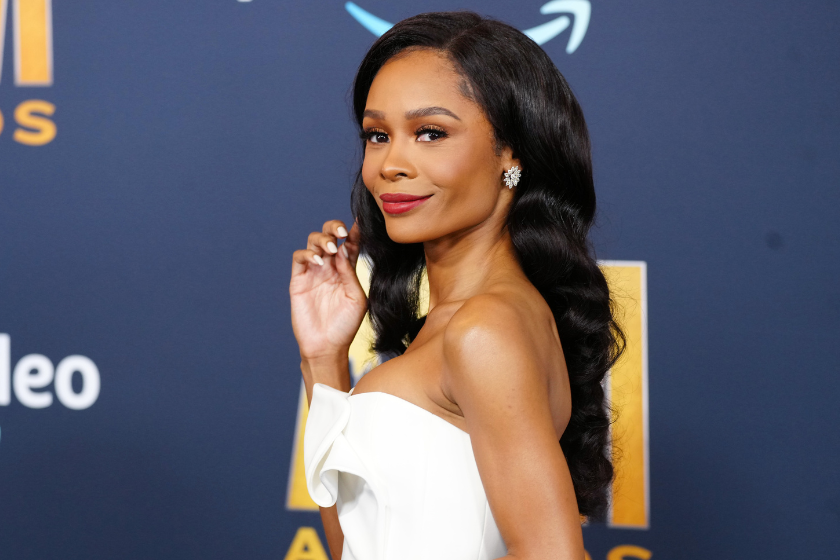 Soon after Kelce and Nicole split, it was rumored that the most eligible bachelor in Patrick and Brittany Matthews Mahomes' contacts was shacking up with Access Hollywood correspondent Zuri Hall.

The NBC entertainment correspondent and Kelce are in the early stages of their relationship, with the only real evidence of their courtship being rare glimpses in the background of their friends' Instagram stories. However, those close to the couple say things are going well.

The Chiefs tight end and the American Ninja Warrior reporter have more than a love of sports in common, too. Hall was originally born in Toldeo, Ohio, and attended Ohio State, while Kelce was born an hour and a half away in Westlake, and famously attended the University of Cincinnati. 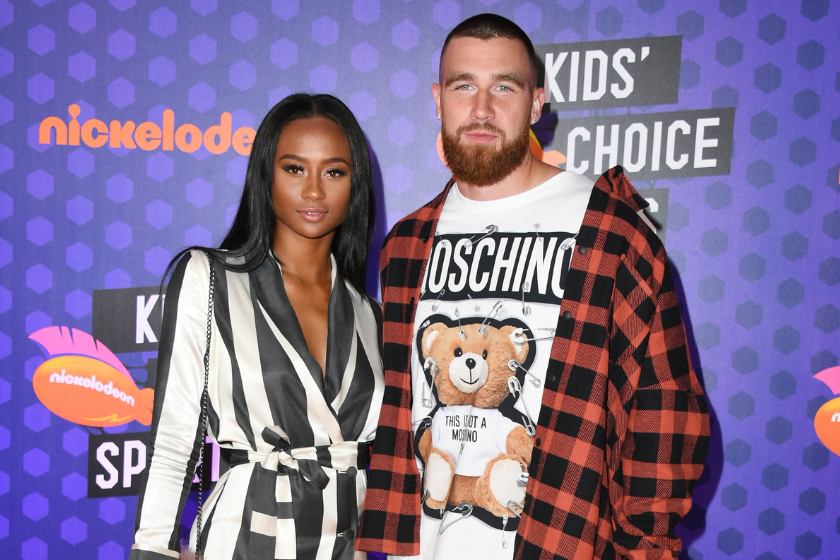 Kayla Nicole describes herself as an "on-camera host" and has worked for publications such as NBA, BET, Global Grind, HotNewHipHop, XONecole, All Def Digital, Ballislife.com and served as a court-side reporter for the Los Angeles Lakers, according to Sporting News. She's also reportedly worked as a productions assistant for CBS Radio in New York.

Besides interviewing rappers and artists, she's also a model who has competed in beauty pageants.

The sports media personality currently has more than 600,000 followers on Instagram, 36,000 on her YouTube channel and reportedly hails from Los Angeles, California. She attended Pepperdine University in Malibu, where she received a degree in broadcast journalism.

One glance at both of their social media accounts (@killatrav and @iamkaylanicole) and you can tell Nicole is Kelce's right-hand woman when he's not catching passes at Arrowhead Stadium. She's attended dinners with the fam, galas with other celebs and weddings with him. After the Chiefs beat the San Francisco 49ers in Super Bowl LIV, she partied on one of the floats in the parade.

"Woke up next to an AFC champ this morning!!!! Few things more satisfying than watching the man you love achieve his dreams," she wrote on Instagram after the Chiefs' AFC Championship game win in January 2020. "Trav, (you're sitting next to me so don't make this weird lol) - your dedication, resilience and heart for this game is unmatched. You are truly reaping the fruit of your labor and I'm just thankful I get to witness. I dream bigger because of you baby. One step closer!"

Nicole also commiserated with Meghan Markle and Prince Harry on an Instagram story. "Oh man," the TikTok influencer began. "Meghan is just a much better person than me. God knows who to test and who not to test. I would have burned the whole castle down." Be sure to follow her for more stories.

Why Did They Break Up? 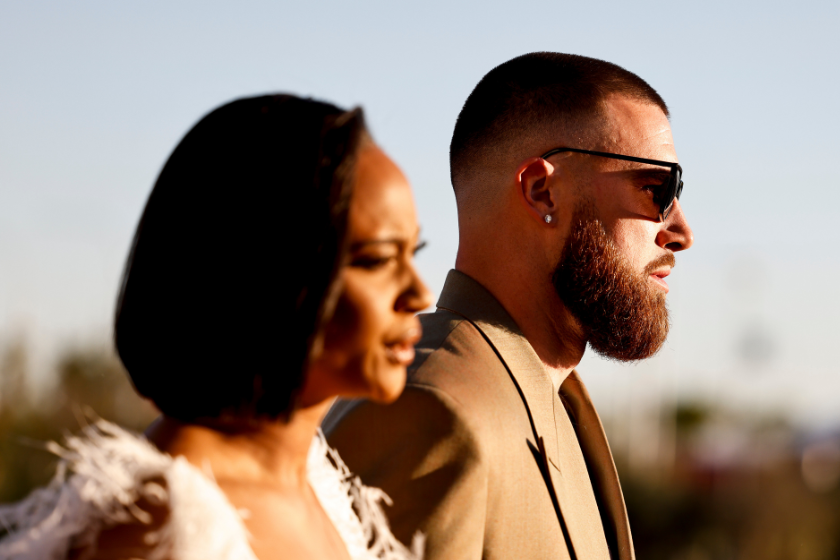 In early August 2020 during the coronavirus pandemic and COVID-19 outbreak, the NFL star confirmed that he and his longtime girlfriend had officially broken up. According to TMZ, he responded to a tweet accusing him of cheating on Nicole with a "Becky" AKA a white woman.

"This is fake news ... a lie ... and not why Kayla and I broke up," Kelce wrote about cheating rumors in the since-deleted tweet. "Take all your hatred somewhere else please."

The tweet he was replying to read, "Girlfriend of NFL player Travis Kelce LEAVES Him After He Got Caught W/ Becky."

It was pretty clear things weren't right between them judging from her Instagram account. She deleted all pictures and videos with him, signaling they called it quits. As for the reason they broke up, you can decide for yourself what to believe.

In late November 2020, though, the two made up and got back together. The Chiefs tight end confirmed that in a live video Q&A with WNBA player Chiney Ogwumike.

Kelce Had His Own Dating Show

More than five years ago, before dating Kayla Nicole and Hall, Kelce starred on his very own dating show: "Catching Kelce." The Bachelor-style show, which is basically a way to speed-run amassing ex-girlfriends, ran on E! from January 2016 to April 2016 and included a cast of female contestants that oddly included former NFL player Mark Schlereth's daughter.

The woman who "caught Kelce" on the show was Maya Benberry. The Paducah, Kentucky, native didn't win money or a prize on the reality show, but she did win a relationship with an NFL player and the fame that came with starring on the reality TV show.

"I did win. We wrapped up filming the finale April 8, and we've had to keep things a secret since," she told Kentucky.com. "Now we just date in real life. To me and him, it feels like a fresh start."

Things didn't last long between the two of them, however. By January 2017, she confirmed that they had split up.

In May 2017, she accused Kelce of some pretty shady stuff regarding his quick turnaround to dating Kayla Nicole.

"When you and your ex broke up 5 months ago but you find out via social media that he's supposedly been in another relationship for 6..." Benberry wrote in a tweet.

Regardless, Kelce appears to be happy with Nicole judging from pics. There's no need for a second season of "Catching Kelce" anytime soon.

This post was originally published on July 20, 2020, but has been updated to track Kelce and Nicole's relationship.

MORE: Andy Reid & His Wife Have Been Married Almost 40 Years