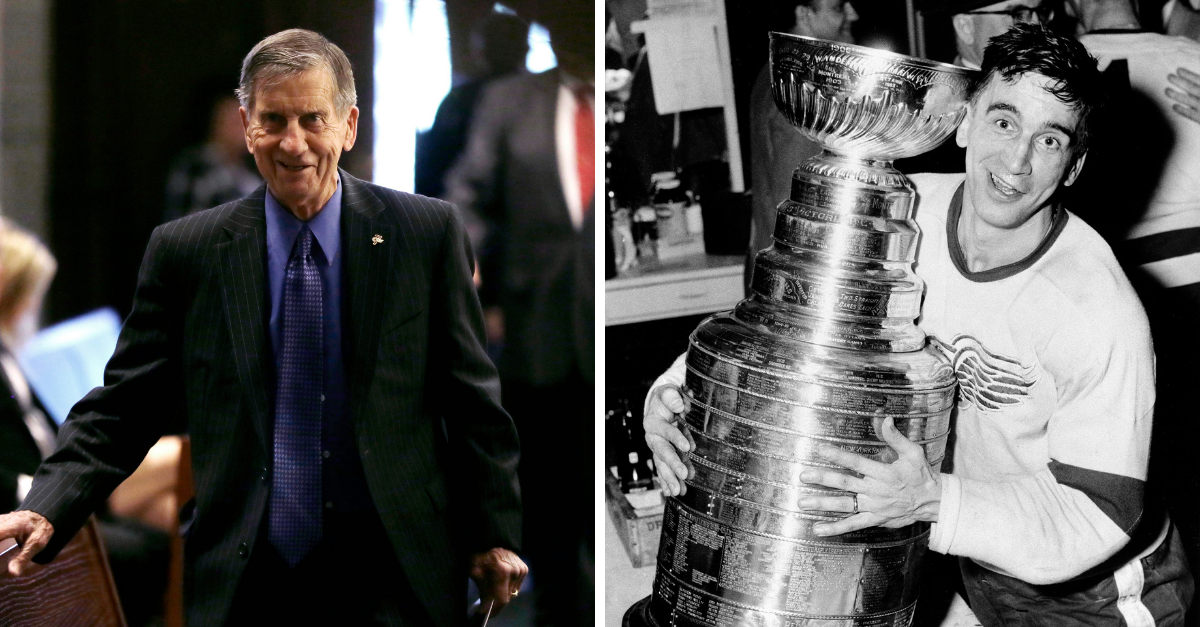 DETROIT (AP) ? Ted Lindsay lived to do what he thought was right.

He pioneered the first NHL players’ union despite intense opposition from team management, began the tradition of taking the Stanley Cup closer to fans by skating it around the ice and refused to attend his own Hall of Fame induction ceremony because only men were allowed.

The players and NHLPA staff are deeply saddened to learn of the passing of Ted Lindsay – a player, a trailblazer, and a gentleman. "Terrible Ted" was loved across the hockey world and beyond for his play, dedication to fellow players and charitable work. https://t.co/jpDcnWZ68l pic.twitter.com/0QBECLqmva

“I was led by a feeling of fairness,” Lindsay once said.

Lindsay, the 5-foot-8, 160-pound tough guy who provided muscle and meanness on the Detroit Red Wings’ famed “Production Line” of the 1950s, died Monday at the age of 93 in his home in Michigan, according to Lew LaPaugh, his son-in-law and president of the Ted Lindsay Foundation, which raises money for autism research.

The player known as “Terrible Ted” was one of the game’s best left wings and an 11-time All-Star who played on four Stanley Cup winners in the early 1950s. Lindsay, Sid Abel and Gordie Howe formed an offensive juggernaut of a line that helped make Detroit one of the first of the NHL’s great postwar dynasties and they had a fitting nickname in the Motor City.

Lindsay is credited with beginning the ritual in which players skate around the rink holding the Stanley Cup they have just won.

The tapestry of NHL history was stitched on Ted Lindsay’s face. May we all strive to be reflexively selfless, visionary & as tough as “Terrible Ted.” Some people take from this world, some give. Be a giver & think of others. And maybe we will all make it to 93 like him #RIP pic.twitter.com/CLFzMiZZPC

“I saw it sitting there, and I thought, ‘I’ll just pick it up and I’ll take it over,'” Lindsay recalled in an interview with The Associated Press in 2013. “I just moved along the boards. I didn’t have it over my head. I had it so they could read it. I wasn’t starting a tradition. I was just taking care of my fans that paid our salary.”

Lindsay took his toughness off the ice to organize a players’ union despite opposition from team executives and without the support of Howe, perhaps the most famous hockey player of all. Lindsay pressed on anyway without the backing of “Mr. Hockey.”

“All of us who were involved in trying to establish the players’ association weren’t the ones who needed it,” Lindsay explained. “It was for the fringe players that were the worst off. When I got caught up in this, I was so grateful to the game for all it had done for me. But it was a dictatorship on the part of the owners, who didn’t realize any of us had a brain.”

At one point, Lindsay gathered secretly with a handful of players in New York in 1957. The next day, Red Wings general manager Jack Adams was very angry about it.

“He was ranting and raving,” Lindsay recalled in an interview with the NHLPA . “But, I’d do the same thing.”

Lindsay, who was named president of the short-lived union, was traded to Chicago the next summer.

“It didn’t matter that they traded me,” he said in 1995. “I have a Red Wing on my forehead and on my behind and on my heart. That will never change.”

#RedWings legend Ted Lindsay passed away peacefully this morning at his home in Oakland, Mich. He was 93 years old.

RELATED: Julius Campbell, Who Helped Us ‘Remember the Titans,’ Dies at 65

The NHL Players’ Association was formed for good in 1967 ? a decade after the Lindsay-led attempt to unionize ? and the organization put Lindsay’s name on its version of the MVP award. The honor, which is chosen by an NHLPA vote, was previously called the Lester B. Pearson Award after the former Canadian prime minister.

“On the ice, Ted Lindsay was one of the best players to ever to put on a pair of skates,” NHLPA executive director Don Fehr said. “But his greatest legacy was off the ice. A true trailblazer in seeking to improve conditions for all players, Ted was instrumental in organizing the original players’ association in 1957. All players, past, current and future, are in his debt. All those who have, and will follow him into the NHL, enjoy improved rights and benefits in large part due to the efforts he made.”

The Hockey Hall of Fame waived its three-year waiting period when it inducted Lindsay in 1966, but he declined to attend the banquet because his wife and children were not welcome. The following year, the banquet was open to men and women.

“That’s amazing,” Edmonton star Connor McDavid said as news of Lindsay’s death filtered out. “That just goes to show what he’s about and he was not afraid to stand up to anyone and stand up for what he believed in.”

During his 14 seasons in Detroit, he led the team in goals only once. He led or tied for the team lead in penalty minutes 10 times, including his final season of 1964-65, when he was approaching 40 years old.

Former Bruins player Milt Schmidt said Lindsay “probably was one of the most hated players in the National Hockey League” because of the way he came after other teams.

“But every franchise would have given their right arm for Ted Lindsay,” he said.

Lindsay retired following the 1959-60 season and focused on his automotive business. He came back for one more season with the Red Wings in 1964-65 and returned to Detroit as general manager in 1977 and remained in that role until 1980. During the 1980-81 season, he coached the team for 20 games.

He was a familiar face around the Red Wings for decades after his retirement ? and what a face. Pucks, fists and elbows took a toll on his face, leaving scratches and dents after uncountable numbers of stiches. He was booed on road trips, the player every opposing team loved to hate.

“There’s only one reason I played. That was to win,” he told The Canadian Press in March 2015. “And also to play better the next day than I did the last game.”

READ MORE: This 4-Year-Old Lives His Best Life While Mic’d Up at Hockey Practice