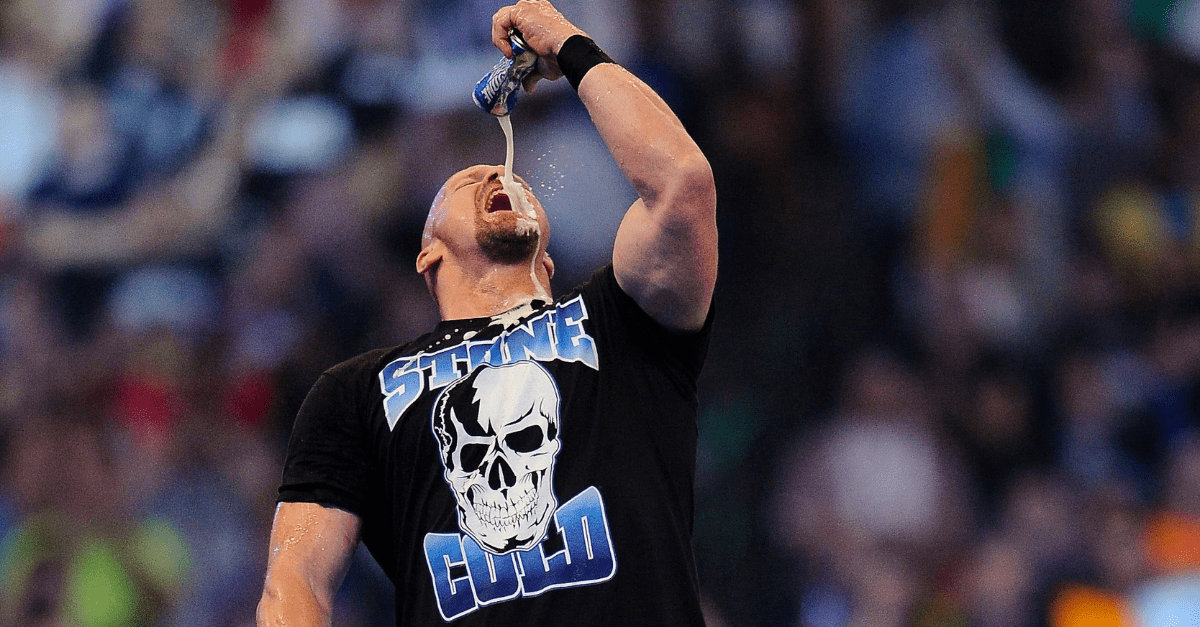 Growing up and watching the Attitude Era of professional wrestling, there was only one WWE superstar I wanted to be: “Stone Cold” Steve Austin. The Texas Rattlesnake was the greatest showman in a loaded ensemble of pro wrestlers. He was loud, brash, arrogant, and was cracking beers cans together before it was cool. He’s still the greatest wrestler ever in my mind. Heck I’ve even worn a Stone Cold Steve Austin costume for Halloween… twice.

From the time he debuted on Raw in 1996, the man was born for greatness. He started as “The Ringmaster,” but later stuck with the iconic name we know him as today. With his bald head, goatee, and 250 pounds of Texas-bred badass, Stone Cold tore through pro wrestling until several knee injuries and a neck injury forced him to retire in 2003. The legacy he built during his short career as an active wrestler lives on today. The list is endless, but here are 13 of my favorite Stone Cold Steve Austin moments of all time, and that’s the bottom line ’cause… well, you know the rest.

Stone Cold spoiled the presentation of a 25th anniversary plaque honoring the WWE Raw reunion. Steve Austin was a huge factor in making Raw is War the spectacle it was around the year 2000, so it was only fitting he’d return to drop his iconic finishing move ? the Stone Cold Stunner ? on the entire McMahon family to celebrate.

Legendary ring announcer Jim Ross once called Dwayne “The Rock” Johnson and “Stone Cold” Steve Austin, “Perhaps the two greatest rivals in the history of sports entertainment.” That rivalry featured plenty of matches, but my favorite was the main event at WrestleMania X-Seven. In front of a then-record crowd inside the Astrodome, Austin would turn heel and defeat The Rock with Vince McMahon’s help and win the WWF Championship.

No wrestler was better at interrupting whatever the hell someone was doing and taking over the entire show. On an episode for Raw in 2002, the WWE Hall of Famer, wearing his legendary “What?” T-Shirt, spent several minutes telling an entire story while the crowd shouted ‘WHAT’ to response to everything he said. Want to know what the WWF was all about? Watch this video.

10. Everybody Gets a Stone Cold Stunner

With the Alliance trying to overtake WWF, Stone Cold, who previously didn’t give damn because he’s Stone Cold, suddenly turned face on Raw and stunning every single member of the group, single-handedly ending the chaos. Just another day at the office for the Texas Rattlesnake.

It seemed like Stone Cold turned heel and face so many times it’s hard to count, but he was always ruining somebody’s day in the process, just like the time he dropped a steel beam onto Degeneration X’s van, which somehow exploded. I’ll never understand why the WWE decided to stop blowing up vans and destroying cars on a weekly basis because it’s still awesome.

If you haven’t seen Stone Cold terrorize WWE headquarters as its new CEO, you need to stop reading and watch this in its entirety. Only this man would make the receptionist answer the phone, “Who the hell is this?”

What happens when two icons clash? Gold. The two weren’t always in agreement, but when Austin met Shawn Michaels at WrestleMania XIV, “Iron” Mike Tyson served as “special enforcer” for the match. However, Tyson turned on Michaels, Triple H, and the Degeneration-X faction to help Austin win the WWF World Heavyweight Championship.

Again, I don’t know why WWE stopped destroying cars… Stone Cold always messed with WWE Chairman and CEO Vince McMahon, but one of Austin’s greatest moments was filling McMahon’s Corvette with cement on live television while he helplessly watched from the back.

With Raw in Detroit, Mr. McMahon was trying to present the WWF Championship to either the Undertaker or Kane, but Stone Cold had other plans. Running over barricades and past the guards, the Rattlesnake drove a Miller Lite sponsored Zamboni into the arena and clotheslined McMahon in the middle of the ring while seven police officers tried to arrest him. Legends never die.

Austin rose to stardom after winning the 1996 King of the Ring and defeating Jake “The Snake” Roberts. After winning, Stone Cold delivered the promo speech that launched his iconic career when he said:

“You sit there and you thump your Bible, and you say your prayers, and it didn?t get you anywhere. Talk about your psalms, talk about John 3:16? well Austin 3:16 says I just whipped your ass!“

Every single fight outside of the WWE wrestling ring is already better, but none will ever top Stone Cold making a human pizza out of Booker T. The pair destroyed a grocery store as Steve Austin embarrassed Booker T in hilarious fashion.

Stone Cold might have spilled more beer than he drank in pro wrestling, but nothing will top the beer shower he gave the McMahons. After trolling The Rock and all of his catch phrases, Stone Cold grabbed a fire hose attached to a Coors Light beer truck and blasted both Vince and Shane McMahon, and probably the entire front row. Just for good measure, he dumped a few more cans into his mouth afterwards.

1. Stone Cold Crashes His Own Funeral… In a Monster Truck

After The Rock “threw” Austin off a bridge, Stone Cold returned on Monday Night Raw to a staged funeral driving a giant monster truck with “Austin 3:16” painted on the side, destroyed a few cars, and did what only Stone Cold can do: cause mayhem, create a wild memory, and cement his legacy as the greatest showman in the history of professional wrestling.