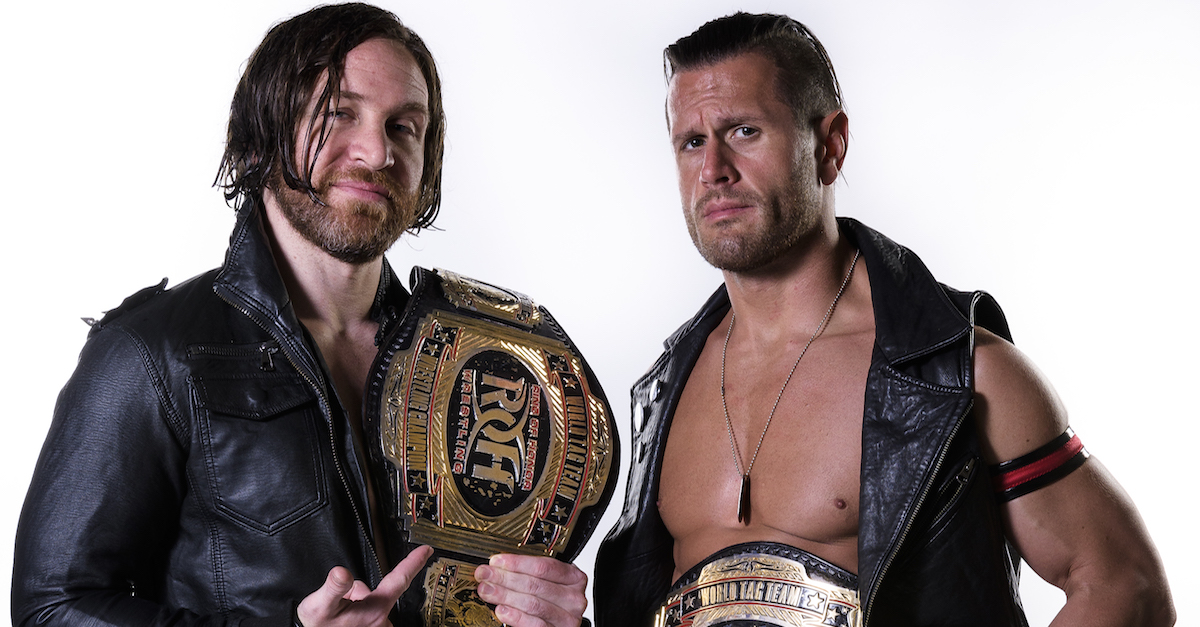 At Final Battle, Alex Shelley and Chris Sabin look to keep pace as the team to beat in Ring of Honor

With more than 30 years of experience between them, the Motor City Machine Guns are accustomed to new challengers.

On Friday, December 15, from the Manhattan Center’s Hammerstein Ballroom at 9 p.m. ET live on pay-per-view, Alex Shelley and Chris Sabin will defend their Ring of Honor Tag Team championship against a team with eyes on knocking them from their throne — Best Friends, Chuckie T and Beretta.

“I’m pretty stoked about it. It’s a new match for us,” Shelley said. “I think the world of them as a team.”

“It’ll be a great tag match. Of course Alex Shelley and I are the champions, we’re the best. Fans are in for a treat. A great scientific tag team match that’ll be highly entertaining,” Sabin added.

With the tag titles on the line, the Motor City Machine Guns will yet again battle for the claim of top team in Ring of Honor. Rising to the top has been a long winding road that started in Detroit, Michigan.

“You tell people you want to be a pro wrestler and people kind of laugh it off.”

Only separated by two years from their in-ring debut, Shelley and Sabin grew up watching WWF wrestling.

Understanding they’d never be a giant, bruising wrestler, both up-and-comers gravitated toward high-flyers.

Sabin would help pave the way for how his and Shelley’s career would develop.

“He was an up-and-coming guy as I was still training. He was one of the first guys to truly be an incredible athlete around here. You’re talking about the transition period from the late 90’s-early 2000’s into a more streamlined athleticism. The Michigan independent scene was dominated by guys who were more acclimated to 80’s-90’s style wrestling,” Shelly said.

“Sabin was one of the first around here to break into that mold of wrestling.”

As the pair of wrestlers transitioned out of Michigan, it wouldn’t be the only time Sabin and Shelley helped transform the wrestling industry.

“You’re either going to be one of those guys who wants to drive and wrestle as much as possible in as many different places as possible, or you’re not.”

In Michigan, there weren’t many guys who were willing to put in the effort to grind every weekend, according to Shelley.

That’s what made Sabin and Shelley’s early bond with guys like Jimmy Jacobs and Petey Williams truly unique.

“Jimmy Jacobs lived out of his car. The four of us were willing to grind pretty much everywhere and wrestle everywhere as much as possible. We wanted to get better and get our name out there,” Shelley said. “Back then we didn’t have YouTube. I hate to date myself, but it’s so much easier for guys to get their material out there than it was. You had to go make contacts and impress people and get help along the way and learn along the way.”

True innovators and some of the best athletes on the independent circuit, Sabin and Shelley would take their talent to TNA wrestling, where the promotion would see arguably its greatest success.

“(We) created this unique new-age style of wrestling. It’s the status quo nowadays. We were pretty much pioneers as far as that goes.”

Sabin landed in TNA in 2003, quickly followed by Shelley the very next year. Sabin would win the X-Division title early in his career, while Shelley landed in what he explains as a “low-card character.”

Over the next few years, TNA’s X-Division would take center stage as one of the hottest acts in professional wrestling behind the likes of AJ Styles, Christopher Daniels, Samoa Joe, Sabin and Shelley.

“We had a lot of hungry wrestlers who had something to prove,” Sabin said.

“You got the right collection of wrestlers at the right time who were willing to do new and different things. Everybody was willing to think outside the box. Everybody was hungry and relatively young,” Shelley said. “You had a lot of cross-cultural experience. Sonjay and I started going to Zero-1 MAX in Japan and bringing back all sorts of things. Samoa Joe bringing in his style of wrestling and AJ Styles did his thing. We had guys coming in from AAA and the occasional Japanese wrestler. It was a really good melting pot of wrestling. I kind of attribute that to the success of it — catching lightning in a bottle.

“You can’t plan these things. If I said right now, ‘I want to make X-Division Part 2,’ you just can’t do it. These things happen organically or they don’t happen at all.”

After seeing individual success in throughout their tenure, Shelley and Sabin joined forces as the Murder City Machine Guns in 2007. They’d later become the Motor City Machine Guns and one of the most creative tag teams in the world.

“If I could wrestle anybody for the rest of my life, it would be (the Young Bucks).”

During MCMG’s run at the top of TNA, they were also instrumental in bringing over Nick and Matt Jackson, the Young Bucks. Or what they’d be known as in TNA — Generation Me.

While they were in TNA, Sabin and Shelley battled the Bucks at PWG and came away impressed. Shelley asked the Bucks if they’d be interested in coming to TNA and if so to send a video package over. They were and Shelley pitched it to management back in 2010.

“I said these guys are amazing and you should sign them as soon as possible. It took probably about six months to get a tryout match. It was against us, we got a standing ovation as we came to the back and literally about two minutes after they came to the back, they were offered contracts,” Shelley said.

“They should have been a bigger deal in TNA. When you get a bunch of management changes, that kind of resets everything. That obviously hurt not just them, but everybody.”

The Bucks would be used sparingly in 2011 and 2013 in TNA before going on to bigger and better things on the independent scene. Shelley would leave TNA in 2012, with Sabin bouncing on his own in 2014.

Their respective careers would come full circle over the next six years or so.

“Each time I arrived (in Ring of Honor), it was on this upward trajectory.”

After making sporadic appearances in the promotion over their careers, both wrestlers arrived in Ring of Honor full-time in 2015.

“They never seemed to take a step backward. The company has continued to grow. A lot of passionate people who work here. They don’t stifle people’s creativity,” Sabin said. “They want your natural abilities and talent to come out and to not be hindered by someone else’s vision of what they want you to be.”

As the company continued to grow, as did the Motor City Machine Guns’ role in ROH. They would arrive back on top in 2017, conveniently taking the tag team titles from the Young Bucks at Death Before Dishonor XV.

“We had never won titles in ROH before. It was very cool. Alex Shelley and I reformed our team. Felt like some vindication. It’s like hey, we still have the ability to be the best tag team in the world. That’s still possible. And I think we proved that,” said Sabin.

That label as one of the best tag teams in the world will be on the line when they have to prove it yet again in the historic Hammerstein Ballroom on Friday, December 15.

“The atmosphere is always unique. The crowd always has this certain energy that makes it different from anywhere else,” Sabin said.

Ring of Honor Final Battle will air at 9 p.m. ET live on pay-per-view, ringofhonor.com and the Fite.tv app when the Motor City Machine Guns take on the Best Friends for the tag team titles.