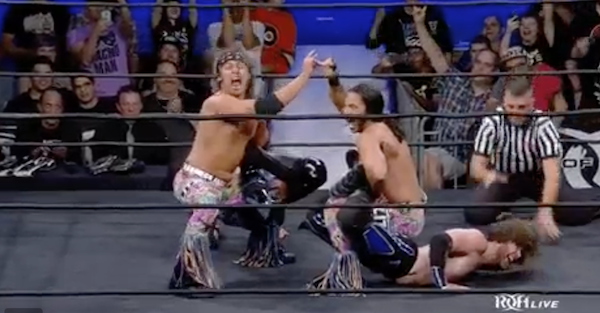 Motor City Machine Guns went head-to-head with the Young Bucks and came out on top for the first time in their Ring of Honor careers, winning the Tag Team championship from Nick and Matt Jackson.

The Bucks controlled most of the beginning of the match, before the two teams traded double-team move attempts.

After a referee bump, the Addiction hit the ring and took out both teams. The Bucks and MCMG fought off Christopher Daniels and Frankie Kazarian to the outside. The teams hit a devastating double Indietaker on the outside to take out Daniels and Kazarian.

The Addiction DID promise to ruin everything ROH fans loved. #ROHDBD pic.twitter.com/OgV5TFC3YQ

The Bucks and Guns bonding over a common cause. #ROHDBD pic.twitter.com/SxynZZQGJE

Back inside the ring, a reversal by MCMG set up a german suplex from the top rope and eventually a double team move for the pinfall victory.