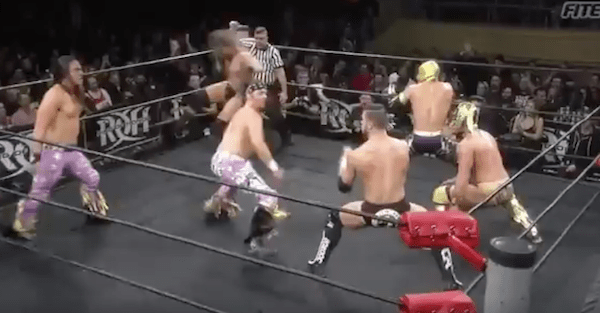 Paths crossed between Ring of Honor stars and UFC fighters in a weird turn of events Sunday morning.

After the Hung Bucks put on another solid match, successfully defending their Six-Man Tag Team titles at Final Battle, UFC fighter Chase Sherman called out one particular video and the pro wrestling crowd:

Now that I’ve quote tweeted you, grown men know who you are too. https://t.co/gjkuuOmgIO

@philbaroni this is actually pathetic. This is what people wanna see? Go to a god dang gymnastics competition. Suplex, bodyslam, piledriver do some old school wrestling man. DDT, I remember when the frankensteiner was the most you’d ever see someone flip. I say Boo to this BS https://t.co/eF4pnCy0SA

Sadly, I agree with you, Chase. Pro wrestling was the blueprint for promoting fights & was the building block for the success of the @ufc . This horseshit is not pro wrestling. Grown men USED to do it & it worked. Grade school kids pretend fighting is why you guys have taken over https://t.co/407Rf6KVFp

There’s been plenty of controversy over “choreographed” wrestling, specifically Ricochet’s incredible tilt with Will Ospreay more than a year ago.

Where do you stand?