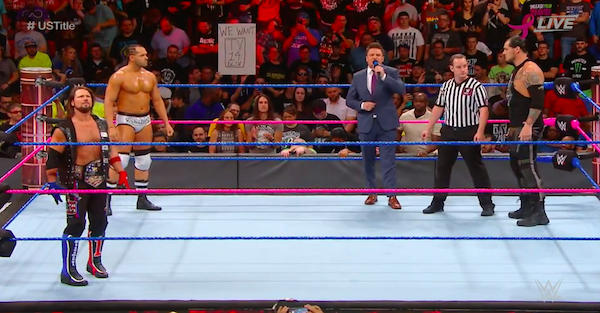 Baron Corbin pinned Tye Dillinger to defeat the Perfect 10 and AJ Styles to win the United States Championship at Hell in a Cell.

Corbin took Dillinger out of the match, hanging the Perfect 10 on the top rope. He turned his attention to Styles showing off his strength in the bout.

Corbin continued his domination of Styles and Dillinger until the champ made his way back into the ring and chopped down the challenger.

With Corbin knocked down, Dillinger tried to make his comeback. Styles caught him in the calf crusher, but Corbin made the save.

Corbin hit the Deep Six on Dillinger, then hit a chokeslam backbreaker on Styles for the two count.

Dillinger superkicked Corbin, Styles hit the Pele on Dillinger and the Perfect 10 fell backwards into a pin on Corbin, but only got the two count.

Styles hit the Phenomenal Forearm on Dillinger, Corbin knocked Styles out of the ring and snuck in for the pinball victory.

After Dillinger defeated Baron Corbin by pinfall on Smackdown, the Perfect 10 was added to the United States championship match less than an hour before the show started.

Styles has held the title for over 70 days, which is his second reign with the belt. He defeated Chris Jericho and Kevin Owens to win the belt back in July. He’s defended the belt against Owens three times and Dillinger twice.