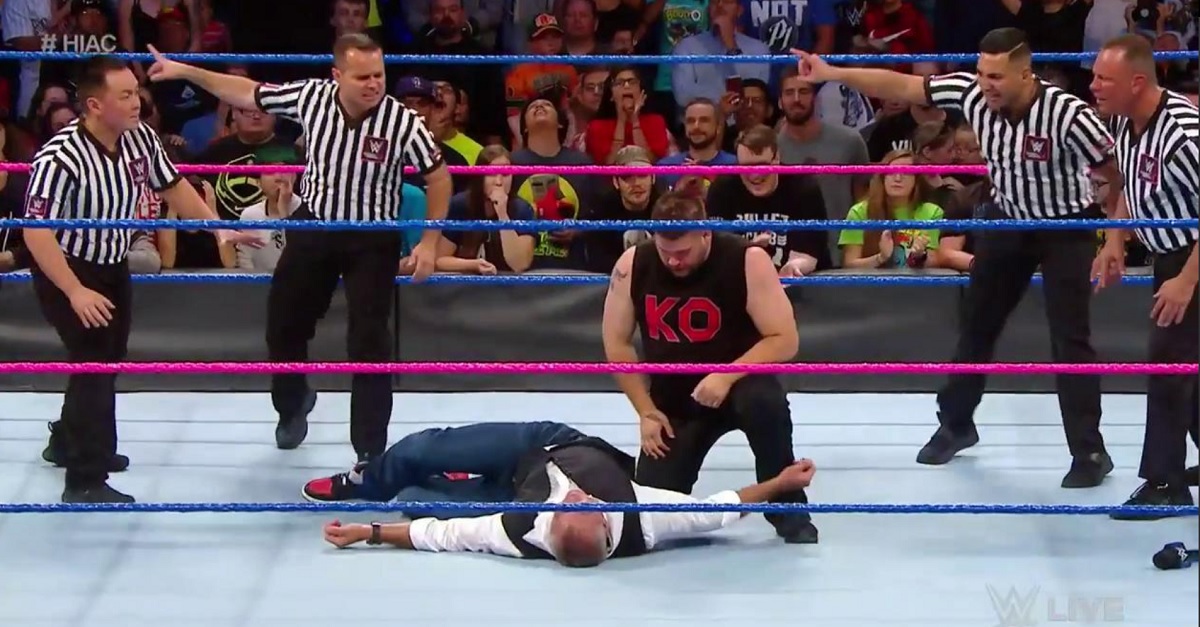 Kevin Owens and Shane McMahon are going to tear the house down at Hell in a Cell and I?m all for it. Shane talks about how Kevin is a coward and notes that he can no longer run because he?s gonna be in a cell with Shane. During the promo, Shane announces that it will be ?Falls count anywhere?.

Kevin Owens walks through the crowd and mocks Shane?s theme, Kevin thinks about going to the ring and then says he says he?s spent way too much time in Denver and then Shane decides to go into the crowd and find KO himself. KO and Shane fight at the mech table (somewhere Vince and Steph are cringing) and KO hits Shane with a powerbomb through a table.

And remember to visit the MERCH STAND! pic.twitter.com/p2VCirUuI0

Kevin then heads to the ring and agrees to the stipulation of ?falls count anywhere?, Kevin announces that he will throw Shane off the cell (YAAAASSSS). In a timely manner, Shane who is battered and bruised at his point battles with KO in the stands and then they go to ringside but not before this woman decides to interfere.

KO ends his assault on Shane with a pop up powerbomb and leaves the ring with refs checking on Shane.

Take my money. Take all my money WWE.

While the Usos/New Day rivalry is clearly one of the best rivalries of the year. I?m not sure what reading the New Day their rights is but Jimmy and Jey cut a fantastic promo on the New Day.

"Come Sunday, WE THE ONES that are gonna be 5x @WWE #TagTeamChampions!" @WWEUsos are all confidence ahead of their #HIAC battle. #SDLive pic.twitter.com/Ln3acSmLRZ

In their classic timing, the New Day make their entrance and have their response. However, there is a clear intensity, no jokes and no frills (except selling underwear of course). This is probably the most intense I?ve seen the New Day and now I’m ready for Usos/New Day to tear the house down.

We are inching closer to a Natalya vs. Charlotte at Hell in a Cell match but it?s becoming more clear that Carmella will be a factor in ?title stalking? Natalya like Carmella did with Naomi.

As far as Charlotte eating the submission before their match at HIAC? Not a fan of the finish, especially when it?s clear that Nattie vs. Carmella is clearly the next storyline.

Bobby Roode takes out Kanellis with a glorious DDT and ends the match 1-2-3. Dolph Ziggler comes out and literally marches to the beat of his own drummer.

Ziggler then goes on to say that he will have an entrance that will be nothing that anybody has ever seen before. FWIW, I think these two will have a great match and I hope they get the time to work a great match.

Before the match, Rusev let everybody know that there will be more ?Rusev Days? ahead of us, I?m all for it. After escaping one RKO, Randy whips English into the ropes and hits him with an RKO for the easy squash. After the match, Rusev attempts to enter the ring but Randy has the look of ?The Viper? (excuse me while I vomit) and Rusev escapes the ring.

Best of the Rest of SmackDown Live

WWE Smackdown Live results leading up to Hell in a Cell