John Cena is one of the most recognizable faces in WWE history. The 43-year-old former wrestler is a 16-time world champion and is tied with only Ric Flair for the most championship reigns in the organization's history. He's also been the subject of too many memes to count.

The Prototype may not give opponents in the ring the "Five Knuckle Shuffle" or the "Attitude Adjustment" like once did, but he still makes sporadic appearances on Smackdown and at WrestleMania. Cena's life beyond wrestling extends into Hollywood, where he's starred as an actor in Dolittle (2020), Playing with Fire (2019), Blockers (2018) and Daddy's Home (2015). He was also a rapper prior to his film days.

Cena's personal life has understandably been viewed under a microscope. He formerly proposed to WWE star and diva Nikki Bella after a tag team match at Wrestlemania 33 before splitting up in 2018. His ex-fiancee, whose sister Brie Bella is also a WWE diva, then had a baby with Artem Chigvintsev, who she partnered with on Dancing With the Stars.

Cena didn't wait long to find the woman of his dreams, and he tied the knot in 2020. 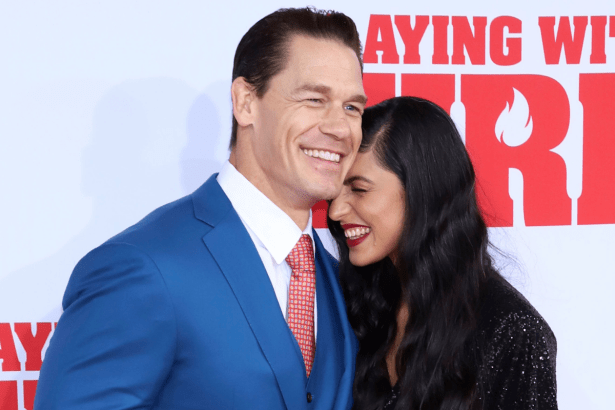 RELATED: John Cena's Net Worth is Money We Will Never See

Cena and girlfriend Shay Shariatzadeh married in a private ceremony on October 12 in Tampa, Florida, according to TMZ Sports and PWInsider.

The couple reportedly began dating in early 2019 but weren't pictured together officially until October 2019 at the New York City red carpet premiere of Playing With Fire. A year later, they tied the knot during the coronavirus pandemic and COVID-19 outbreak.

According to Hollywood Life, the two were first spotted on a date in Vancouver in March of last year. Cena was filming a movie there when the two met up.

Who is Shay Shariatzadeh?

Shariatzadeh is definitely a smart woman.

The newly married woman studied electrical and electronics engineering at the University of British Columbia before graduating in 2013, per E! Online. She then worked as a product manager at Avigilon, a Motorola Solutions Company in Vancouver, Canada.

The Canadian then continued their long-distance relationship and even flew out to San Diego to see him. According to Hollywood Life, she took a remote job that allowed her to travel alongside Cena.

Shariatzadeh isn't on social media, but her husband is. Cena hasn't shared pics from the wedding, but he tweeted on October 9, "love involves constant effort. When you are truly ready to let love in and give to love all it needs to flourish, I feel there is no greater more rewarding connection."

He was previously married to Elizabeth Huberdeau from 2009 to 2012. Cena met Huberdeau in high school, and the divorce was a pretty ugly one.

According to TMZ, she challenged their prenup after accusing him of cheating. Heavy notes that Huberdeau also said she never saw the divorce coming.

Cena never had children with Huberdeau or anyone else for that matter. The WWE superstar publicly made it known that he wasn't interested in having kids while he was dating Nikki Bella, which was reportedly the real reason of their break-up.

"Overall, we did have such an incredible relationship," the Total Bellas TV show star told the "Better Together with Maria Menounos" show. "It was just two people that wanted two different lives. We were trying so hard to make it one."