Report: Injury to one of pro wrestling’s top stars could keep him sidelined for at least 3 years 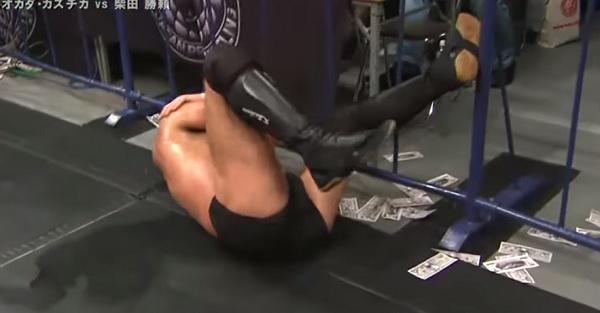 Three years on the sidelines may sound bad, but it might be better than this injury being completely career-ending.

In April, New Japan Pro Wrestling (NJPW) star Katsuyori Shibata needed emergency surgery for a subdural hematoma following a match for the IWGP Heavyweight Championship. Shibata reportedly dealt with some paralysis issues from the injury, and has been in and out of the hospital since.

The latest news from STRIGGA of PuroLove.com and Major League Wrestling is that Shibata is still receiving treatment for his brain and eye, and that if he suffers a bacterial infection in the cut from his injury within the next three years, another surgery will be required.

In his new blog entry Katsuyori Shibata says he currently receives treatment for his brain and right eye with a special treatment device.

Last week he wrote that if there's a bacterial infection on the cut within the next 3 years craniotomy operation would have to be redone.

This would seem to indicate that if Shibata’s injury is not career-ending, he will likely be unable to wrestle for at least three years due to the risk of an infection. Dave Meltzer of the Wrestling Observer previously brought word that Shibata will likely be transitioned into a backstage role if he can no longer wrestle.

It is believed that Shibata’s injury happened during this headbutt that occurred 30 minutes into the 38-minute classic match against Kazuchika Okada for the IWGP Heavyweight Championship at the April 9 Sakura Genesis show.

Subdural hematomas can often be fatal if not treated properly, and even though Shibata is recovering, it is looking more and more like this will be the end of his career. It is a real shame, too, as Shibata truly looked like a superstar when facing Okada — the top star in Japan — for the title.

This is the second time in Shibata’s career where someone has suffered a traumatic head injury during a match; the first being back in 2000 when Masakazu Fukuda passed away after suffering an injury against Shibata after a flying elbow gone wrong.

This is also the second serious injury for NJPW recently as Tomoaki Honma suffered a severe neck injury in March that left him paralyzed for several days. Honma has since undergone surgery and he has regained movement in his extremities. His career, however, is still in question as he faces a long recovery.