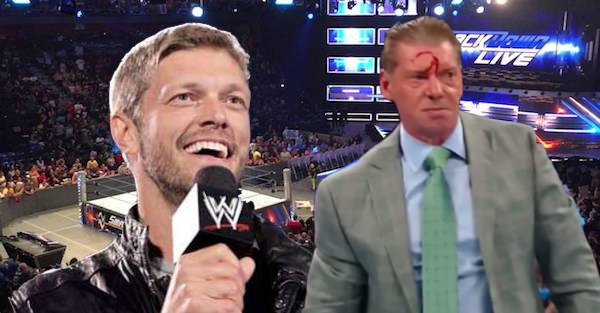 Kevin Owens took another step toward becoming the “main man” of WWE during last week’s episode of Smackdown Live!, according to former WWE star Edge.

The Hall of Famer discussed Owens’ trajectory on the latest episode of the E and C’s Pod of Awesomeness. (H/T Reddit user joshonex)

“They built it throughout the show, which was great. It seems they are pulling the trigger on Owens, properly now. Not that he hasn’t had almost every title in the company already. He’s basically been champion the entire time he’s been there. This is a next level kind of thing. I’m assuming he’s main eventing the Hell in a Cell pay-per-view with Shane now. If anyone is the master of making sure people are put over in matches, it’s Shane.”

“It will be interesting going forward after Hell in a Cell. It could be argued that he just jumped the world title in terms of ‘whoa,’ in terms of interest. This can make Kevin a ‘main man’ basically.”

Owens’ build has been a dramatic one. He’s held the Intercontinental and United States championships on multiple occasions, as well as the NXT title once. He was the second WWE Universal Champion in WWE’s history and held the belt for 188 days, the longest reign in the company’s history.

His position with McMahon likely means huge things for him, as not just anyone gets to work with the boss.

Here’s what happened in case you missed it:

After a jovial appearance, McMahon got angry, telling Owens that he should back off his “lawsuit” after his scuffle with Shane McMahon last week. McMahon then said that he would fire Owens if he tried to sue, and that the only reason he suspended Shane last week was because he didn’t finish the job.

McMahon announced that Shane McMahon would be facing off against Owens at the Hell in a Cell show on October 8 in Detroit, Michigan. After which, Owens turned the tables on the CEO by bloodying him up with a headbutt. Owens then hit McMahon with a superkick and a frog splash to leave him laying.

McMahon last appeared on SmackDown in 2013 to announce Vickie Guerrero as the brand’s new general manager at the time.