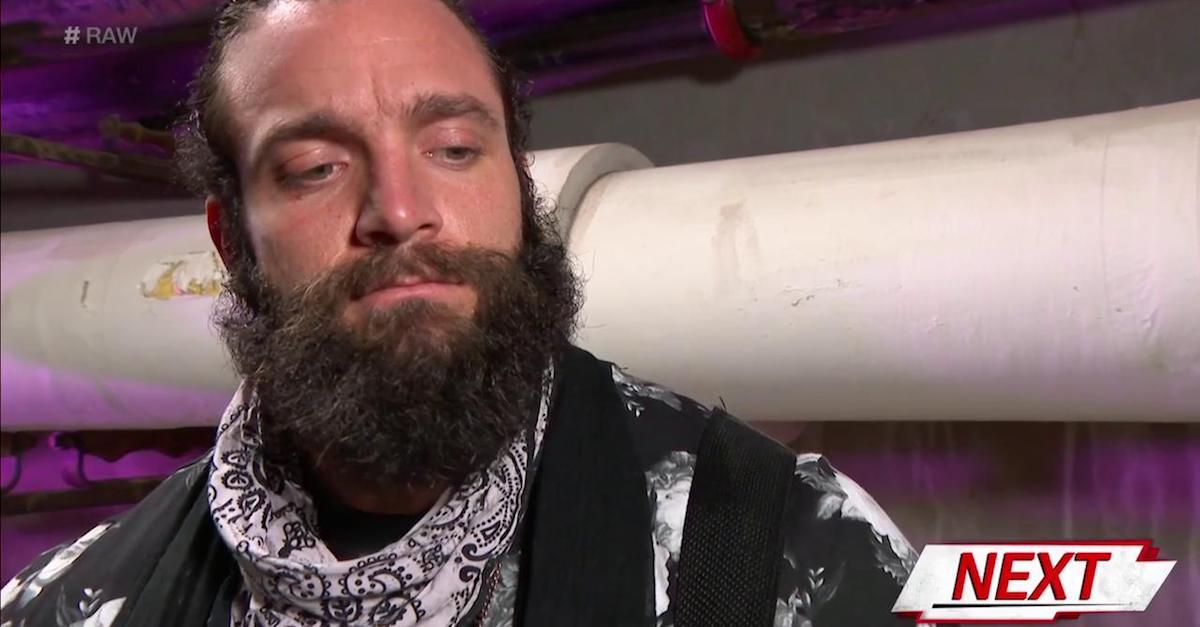 WWE Monday Night Raw broadcasts live with its second show since Royal Rumble leading up to Elimination Chamber on the USA Network at 8 p.m. ET.

Raw opened with Bray Wyatt cutting a backstage promo, discussing his nemesis Roman Reigns. It was Wyatt’s usual banter concerning him being able to see through stuff that’s only neat at the surface level. Mostly putting down Reigns, it was a lead in to Reigns’ own backstage oral onslaught.

For Reigns, he essentially spoke through Wyatt to discuss facing Brock Lesnar for the Universal Championship at WrestleMania.

As it turns out, this was just done to immediately hype the Reigns-Wyatt Elimination Chamber qualifying match that would follow the cut and dry promos.

It started as your typical back and forth match. Neither guy had much momentum going into a commercial break, although it is worth noting they cut to to back where Woken Matt Hardy was watching the match.

The latter act of the match was far more entertaining, with some high-spots being hit by both men. Stunningly, with Wyatt even hitting Sister Abigail on Reigns, the Big Dog of all the yards was able to remain in the bout. After Wyatt attempted a second Sister Abigail, Reigns countered, speared his opponent, and Roman qualifies for the Elimination Chamber.

Following the match, Woken Matt Hardy managed to sneak in the ring and hit Wyatt with a Twist of Fate.

Karl Anderson and Finn Balor def. The Revival by pinfall

Leading in to this match, it is worth noting it was originally meant to be a one-on-one contest. However, The Revival cut a quality promo about being tag team specialists, demanding a tag team contest. They allowed Balor to choose his partner, with Finn choosing Karl Anderson.

Early, it was all Balor Club at all times. In fact, even after a commercial break and some short bursts of offense from The Revival, this match was decidedly one-sided.

The WWE’s random, without context attempt to showcase the Cruiserweight Division! Worth noting, this match didn’t feature the ring ropes changed to the color purple or anything. Everything outside the banner hanging from the canvas was as is for normal Monday Night Raw tomfoolery.

With iffy, especially slow action for the 205 crew happening in the ring, the broadcast crew completely ignored the first half of the match, instead focusing on the Cruiserweight Championship Tournament. Luckily for the live audience, some neat moments did happen toward the end of the contest.

The winning duo celebrated in the ring by staring at the Cruiserweight Championship belt.

Kurt Angle came in the ring to review all the competitors who will fight for Alexa Bliss’ title in the first ever women’s Elimination Chamber. It was your usual suspects of Bliss, Bayley, and Sasha Banks. The surprising entrants were Mandy Rose, Mickie James and Sonya Deville.

Angle went on to explain Nia Jax would be facing Asuka in a one-on-one match at Elimination Chamber. The kicker: If Jax were able to defeat Asuka, she would be added to the latter’s WrestleMania match.

Following all of this, Bliss came out to confront Angle, claiming there’s some bias happening. This is due to the Universal Champion, Brock Lesnar, not having to defend his title at Elimination Chamber, but that she does. Basically, Bliss wants to know why the Women’s Champion is treated differently than the man’s — going as far as calling Angle sexist.

Angle asked the crowd if they wanted to see Bliss defend her title at Elimination Chamber, which resulted in “Yes” chants.

It was an excellent last act to the segment, which showcased Bliss’ excellent character, even if Angle didn’t exactly hold up his end of the bargain.

In what now feels like a match specifically made to build a rift between Bayely and Sasha Banks, the outcome of this one was obvious before either performer set foot in the famed square-circle. Bluntly put: Asuka is not losing on free TV to Bayley.

Asuka dominated early, with Bayley finally getting momentum after sending her opponent to the outside. Asuka would eventually regain control and wallop Bayley as if she owed her money. Bayley would stay in this match, however, and even get in some last minute moves.

Alas, Asuka won after putting Bayley in an armbar. It was a good match that was given time so the two wrestlers could tell a story in the ring. Asuka offered her hand to Bayely and the two shook hands to end this segment.

The Miz def. Apollo Crews by pinfall in an Elimination Chamber qualifying match

Prior to this match, The Miz cut one of his consistently good promos.

This was a coming out party for Crews. While The Miz got some offense in, this was a showcase of the youngster’s skills. He lost, obviously, but he looked excellent in this bout.

The Miz advances to the Elimination Chamber, but Apollo Crews stole the show.

With Jason Jordan saying he can’t compete, Kurt Angle suggests to Seth Rollins he forfeit his chance at the tag team titles. The camera pans over and there is standing a smiling Reigns. Angle nods, we cut to commercial and it looks like we have a mini-Shield reunion happening.

We should start with this gif:

Tell us how you really feel about #TheBar, @WWERomanReigns…#RAW pic.twitter.com/HxjN0pm4n5

You already knew after seeing Reigns do such shenanigans that we were destined for greatness.

This match was great. Legit on pace to steal the show, but this was an instance of longer term storytelling trumpeting a one match payoff.

Jason Jordan made his way to the ring to give moral support to Rollins roughly halfway through the match. Towards the of contest, as The Bar attempted to escape, Jordan punched Sheamus, resulting in a disqualification.

The Bar retained their titles.

This bout started with Strowman dominating, as is now expected. However, after a short period of time, it essentially became a handicap match. The highlight of which was Elias hitting Strowman with his guitar, followed by Cena giving the behemoth on the steps.

The finish of the match saw Strowman recover to hit his running slam on Cena, but with Elias tossing him outside to pin our jean shorts loving hero and winning the match.

He hit his running slam on both Cena and Elias multiple times to end Raw.