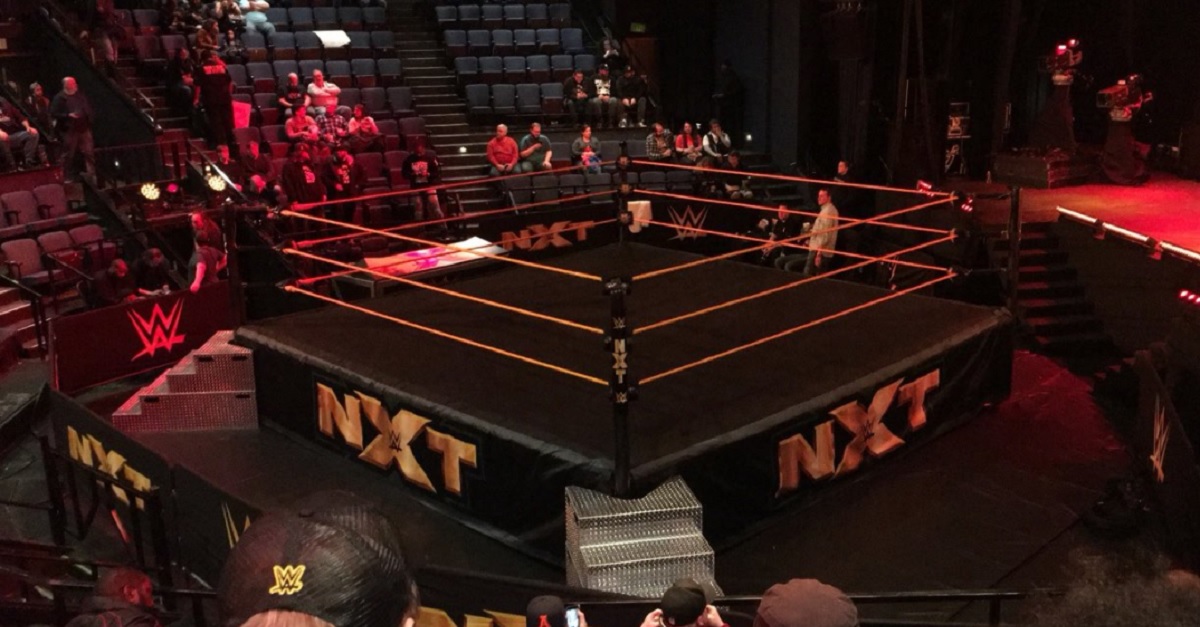 WWE NXT’s first set of tapings after the Royal Rumble event are taking place in Atlanta on Thursday, February 1.

reDragon came out to defend the tag titles, but were attacked by Sanity. Regal announced a 6-man tag for later in the night.

Sabatelli and Moss teased a split, as they argued in the ring. Sabatelli has the three-count, but the red caught his feet on the ropes. Heavy Machinery got the win with the compactor.

Johnny Gargano said he?s coming for Tomasso Ciampa, and Andrade Cien Almas hit the stage to interrupt him. Zelina Vega ran down Gargano and called him a loser. Candice LeRae came out and attacked Vega. Vega asked what it would take to get rid of Gargano, and he said an NXT title shot.

It will be Gargano vs. Almas for the NXT title, and if Gargano loses he?s out of NXT.

Killian Dane got the pinfall on Bobby Fish after a weapons-filled no-holds barred match that went into the backstage area and ended in the ring.

Dane threw O?Reilly off the stage, put himself through a table and there were a handful of chair/kendo stick shots.

Dunne hit the Bitter End for the finish in the best match of the night so far. Strong style, brutal match that included plenty of heavy hitters and great ring psychology.

Aleister Black came out and said he?s gunning for the NXT championship. He was interrupted by Killian Dane, who said he is on Black?s back and he wants the title himself. Black said Dane crossed him, so Dane must fade to black.

Baszler was tearing Moon apart on the outside when Sane attacked, causing the DQ. Baszler locked in approximately eight arm bars in the match.

Dream played up to the crowd and was super over. Would have thought Jose was the heel in this one.

Vega tried to distract Gargano early, and LeRae hit a dive through the ropes, then beat her up the stage to the back. Gargano hit a dive off the apron, but Almas would gain the advantage on the outside.

Gargano fought out of the DDT, and Almas threw him into the ring post. Almas went for the double knee to the post on Gargano, but the challenger got up to fight him on the apron. Back in the ring, Gargano tried to spear Almas through the ropes, but the champ reversed into a armbar. Almas got up and threw Gargano into the turnbuckle, where he landed face down on the bottom turnbuckle. Almas hit the double knee strike to the back of Gargano?s head for the two-count.

After a ref bump, Tomasso Ciampa hit the ring and nailed Gargano with the crutch. Almas nailed the DDT to pin Gargano in the middle of the ring.