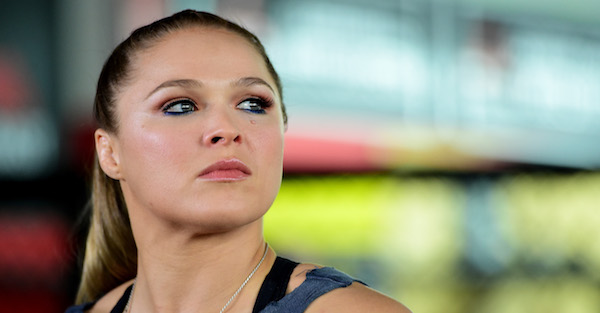 It appears as thought not everyone is thrilled with Ronda Rousey appearing at the Royal Rumble. This is especially so for some colleagues.

For those unaware, the former UFC megastar debuted Sunday after the historic first ever Women’s Royal Rumble. It happened after Asuka won, who then shared a little in-ring moment with Raw Women’s Champion Alexa Bliss and Smackdown Live! Women’s Champion Charlotte Flair, and it didn’t really impede on the moment.

Or, at least that is what some thought before a handful of women’s talent spoke out:

Wonder what all the 30 other women candid thoughts were too? N #firsteverwomensroyalrumble https://t.co/42sztg2JWB

I feel like she isn’t the only one out there! https://t.co/EPs31CGfbO

🤔 I support and said the same thing. Apparently other people feel the same way… pic.twitter.com/y8vfn4SvHp

Let’s just clear up my rant today and call it a day… I got shit to do.. I totally love and support Ronda and everything she did to change the future for women. My rant is not at her. I am merely making sure the women of wrestling get the credit that is due. 👊 have a great day

WWE's Sasha Banks had an interesting comment regarding the arrival of Ronda Rousey this morning. 👀 pic.twitter.com/yFd8xZqn9v

It appears, at least from the outside, as if this is more about the national, non-wrestling base coverage the WWE is hoping Rousey draws.

Nix Jax and Nikki Bella might be giving voice to other wrestlers in the back too, and there is always this weird argument to be made in pro wrestling about “who earned it”.

Whether this is a work, or their true feelings, the spotlight likely isn’t shifting off of Rousey anytime soon. We’ll see if any of these side comments are used to stack the deck against Rousey on television.