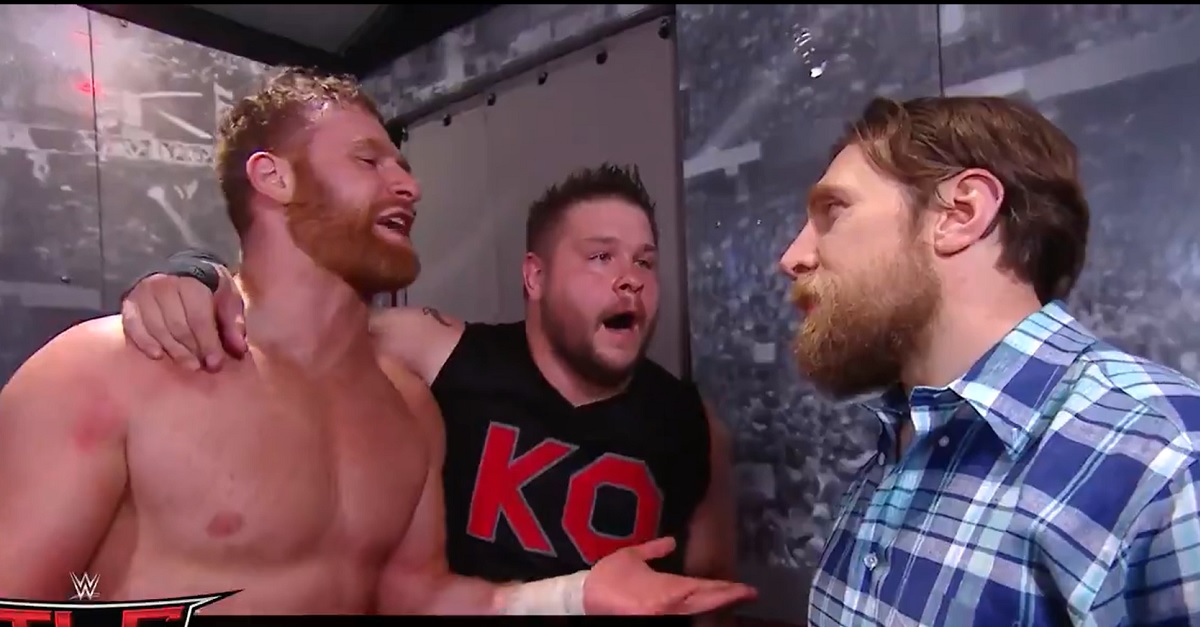 SmackDown Live was broadcast live from Key Arena in Seattle, Washington on October 17, 2017

This match was set up in the opening segment of the show, and it was awesome even if it was just a fraction of what these guys could do together if given longer.

Zayn got the pin on Orton after hitting Orton with a low blow while Owens distracted the ref. Zayn then hit the Helluva Kick for the three count, which all led to Owens and Zayn running into a disappointed Daniel Bryan backstage. The two asked what Bryan had next for them, to which Bryan said it wasn’t up to him…

It would be up to Shane McMahon, who returns next week.

Mahal was out with the Singh Brothers doing his usual spiel. This time he got a “You can’t wrestle” chant from a rambunctious Seattle crowd.

Mahal officially challenged Brock Lesnar to match, as Mahal said he has beaten all other worthy challengers.

It doesn’t seem that Mahal is completely done with challengers from SmackDown, as his proclamations of beating all challengers brought out one that he hasn’t beaten: former WWE Champion AJ Styles. Styles eventually cleared the ring of Mahal and the Singh Brothers, appearing to signal that Mahal could be having a program with Styles as well.

Daniel Bryan opened the show. Place went crazy, as Bryan is from Seattle. After making a couple of announcements for the show, Bryan said he wanted to address Sami Zayn for his actions at Hell in a Cell.

Zayn explained that he doesn’t care any more what people think of him anymore, while taking jabs at Bryan for his career in the WWE being over. It was even enough for the crowd to start chanting “Sami sucks!” at the former crowd favorite.

Eventually Kevin Owens intervened. Owens piled on the “Daniel Bryan sucks” train. Bryan eventually had enough, leaving and saying that he was going to find a “a couple of dudes to punch you in the face”.

This match is going off the backstage brawl from last week. Charlotte got the win with the Figure 8 on Lana, but the big part here was after the match where Natalya tried to attack Charlotte with a chair afterwards like she did at Hell in a Cell. Charlotte wasn’t having any of it, and was able to chase off Nattie off right into the background of Daniel Bryan doing a promo.

First of all, the bulletin board was great, as always.

We got a pretty good spoof of some Pulp Fiction scenes here, including a bicycle pump that had been fashioned into a giant “needle”. The only thing missing was the non-use of a certain word. Samuel L. Jackson does not approve.