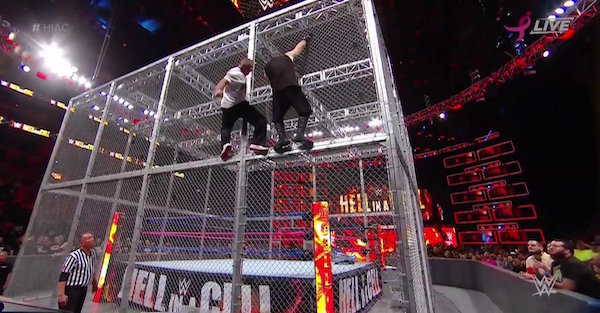 Shane lands some early punches after kicking Kevin Owens out through the cell doorway and the action is fast and furious on the outside. After taking down Shane, KO gets into the Cell and Shane soon follows. Once in the cell, the combatants beat each other up and all the sudden KO takes over and taunts Shane?s kids (quality trolling tbh).

Shane attempts to hit a shooting star press but misses, Kevin Owens counters with a splash of his own, the same one that took out Vince a few weeks back. After some outside work and Owens having the advantage over Shane, Owens busts out the table to a sizable pop. Kevin Owens sets up for a cannonball but misses and goes through the table. As Kevin Owens lays on the ground, Shane beats Kevin with half of the table.

Shane decides to go under the ring on this own and grabs a trash can because you know he?s gotta go coast to coast. Shane connects and goes for the pin, KO puts his leg on the rope breaking the count. Shane looks up at the top of the cell, the crowd starts cheering and that means only one thing?.

(Shane McMahon is gonna jump off the cell for our sins)

Before that, Kevin Owens hits a rude atomic drop against the cell door. Yikes.

As KO puts Shane on the table, he looks up at the Cell?.So I guess Kevin Owens is jumping off the cell for our sins. As Kevin debates on jumping, Shane decides to come up to the top of the cell and things are about to get crazy.

The crowd chants this is awesome after the two fight out and both are laid out on top of the cell. The middle section of the cage is getting a ton of work as both combatants are wearing out the roof of the cell and freaking me out.

After some back and fourth, Shane gets hit with a pop up powerbomb, on top of the cell. This only works in video games., this is crazy stuff!

And then climbs up the cell?.Yep, that?s right kids. Shane is jumping off the cell for our sins!

As Shane jumps, we see someone move Kevin Owens?as it turns out, it?s Sami Zayn!

This is the finest camera work in WWE history pic.twitter.com/9ga7o5EmjV

As both Shane and KO are both dead basically, Sami grabs a lifeless Kevin Owens and lays his body over Shane?s, the ref has no choice but to count 1-2-3. KO wins. Holy crap I can?t wait for Tuesday.

The Usos def. The New Day (via pinfall for the Smackdown Live Tag Team Championships)

As the Big E and Xavier Woods are the two members of the New Day entering the ring. After an intense stare down, both teams go for weapons and things take a left turn much quicker than anybody anticipated. I for one am all in on pure insanity for this blow off feud. We aren?t even five minutes in we have a ?this is awesome? chant.

Adding to the insanity, Xavier Woods takes out Jey Uso with two trombones, a cowbell and a large gong. Yes, this is wrestling kids.

The Usos take advantage of a Xavier Woods with some ECW-like work outside the ring. Big E brings the fight back to the ring and that rally ends with a super kick to Big E.

Great spacing throughout the match so far as each member of the two teams is getting in their spots and taking solid bumps as well. That quickly ends with Big E and Woods putting Jey Uso in the New Day?s version of ?jail?, by pinning him in the corner with kendo sticks.

The Usos use the cuffs to tie Woods to the ring post and they go to town on Woods using the kendo sticks like it?s Game 3 of the ALDS. The brutality in this match has been amazing and none of it has been used outside of the cell. Well done by everybody so far.

This is making me uncomfortable

Back in the ring, Woods (while handcuffed) fights his way to the bitter end but Jimmy and Jey hit Woods with a splash while on top of a chair and the Uso?s get the 1-2-3 to become the Five-Time WWE Tag Team Champions.

First off, your WWE Title Match should be defended in a cell.

When the WWE title isn't being defended in the Cell. pic.twitter.com/5ZGgBtEdLn

After some fun back and fourth, Nakamura gets some kicks in to get the crowd going but Jinder goes on the offensive and tossed Nakamura into the crowd. Nakamura fights back with some kicks but the crowd is really, really dead but attempting to breathe live into the match especially when Nakamura is in control.

The Singh brothers attempt to interfere but referee Charles Robinson throws them out, as Nakamura looks to take advantage, Jinder hits Nakamura with the Kahalas and retains the title.

Some early back and fourth between the ladies is countered with some fun Flair taunts and struts, always good to have Ric Flair call backs. Natalya takes advantage for Charlotte?s knee and Nattie is wearing Charlotte down with holds and leg stretches.

Charlotte attempts a roll up and Nattie counters it but after going off the ropes, Charlotte catches Nattie with a big boot but after lacking a counter offensive, Nattie continued to take control of the match.

Finally, Charlotte hits a big move, even with the bad knee hits a moonsault. As the referee is counting, Nattie grabs a steel chair and goes to town on Charlotte?s injured knee. Ref had no choice but to ring the bell and end the match. As the match ends, Charlotte is rolling around in obvious pain while Natalya celebrates her ?win?.

Dillinger convinced Daniel Bryan during the Hell in a Cell pre show to have a spot in the match and he gets it much to the anger of Baron Corbin.

Great one-on-one action between Styles and Dillinger along with Styles and Corbin to start out. The for a few stretches during the match, the Detroit crowd decided to chant ?Where?s your briefcase?? at Corbin. I laughed more than a few times.

After some solid triple threat work, Corbin takes advantage of an injured Dillinger and works him on the outside of the ring and brings him back in to continue the assault. AJ tries to interfere and ends up being takes out with a right hand from Corbin. Baron starts bearing up AJ and showing off some impressive power.

After issuing a running knee to Corbin, Styles has control of the ring and duels it out with Dillinger. After a failed attempt at a Styles Clash, Styles counters into a calf crusher but Corbin makes the save and pulls Tye out of the ring.

Corbin choke slams Styles countering an attempt at a phenomenal forearm. Once all three men are up, Styles hits Dillinger with a Pele kick and lands on Corbin for a close three count. AJ hits Corbin with a springboard 450 splash but can?t get the pinfall as Dillinger makes the save. Styles hit a phenomenal forearm on Dillinger but then Baron Corbin kicks AJ out of the ring, pins Dillinger for the 1-2-3 and he?s your new United States Champion.

WWE Smackdown Live results leading up to Hell in a Cell