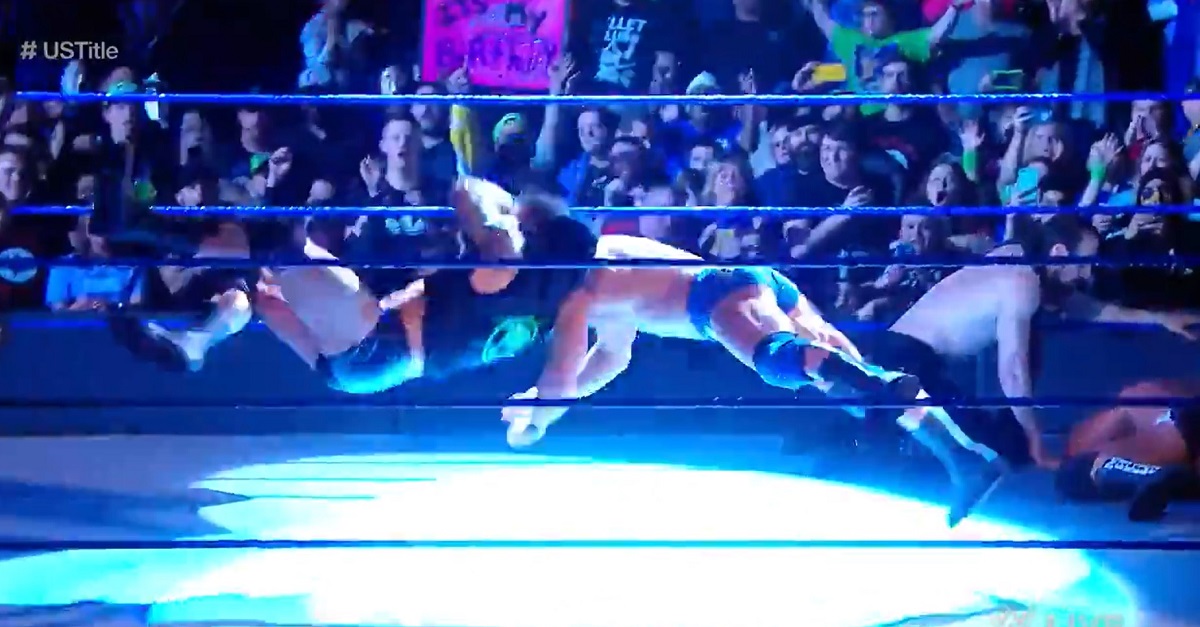 WWE SmackDown Live was broadcast live from the Sprint Center in Kansas City, Missouri on February 6, 2018.

WWE SmackDown Live main event: Sami Zayn and Kevin Owens battled to a DQ in a No. 1 contender’s match

A good main event match here. Zayn was in control early, forcing Owens out of the ring a couple of times after a couple of double-leg takedowns.

After a commercial break, the two started to trade blows back-and-forth. Zayn had a couple of DDTs that looked great, while Owens was eventually able to hit a big frogsplash for a deep two-count. Zayn responded with a Blue Thunderbomb for his own two-count.

Zayn then got in the face of AJ Styles at ringside, and at that point, Styles clearly had enough, hitting Zayn and Owens for the disqualification. Styles laid out both men afterwards, and GM Daniel Bryan declared that Styles would face Zayn and Owens in a triple-threat match — not a handicap one like at the Royal Rumble — for the WWE Championship at Fastlane.

This match went through two commercial breaks, which was weird since it never seemed like they actually got enough time on TV to warrant a second break.

Rusev was getting “Rusev Day” chants throughout the show, but fans were a bit more subdued for the actual match here. Rusev got a couple of near falls with a superkick and then a suplex off the top rope (THIS ONE DURING COMMERCIAL!) but Roode kicked out of both maneuvers. Roode eventually countered with a spinebuster but Rusev kicked out.

Rusev hit another superkick, but he wasn’t able to get the cover on Roode immediately. After trading a couple of attempted pins via rollup, Roode was able to hit the GLORIOUS DDT for the pin and the win.

After the match, SUDDENLY RANDY ORTON! Orton laid out everyone with the RKO, and it looks like the Viper may be the next challenger for the U.S. Championship.

Randy Orton vs. Bobby Roode? Sign me up, even if the two have to have their match on Rusev Day.

Gable and Benjamin were making fun of Breezango’s Fashion Files segment before the match… that led to them facing the Ascension in a short little match, where the Ascension were actually able to get some offense in. They don’t usually get that.

That said… they didn’t actually the win, as Gable hit his rolling German suplex and then he and Benjamin hit their DoomsDay Device for the W.

This match was a result of the Riott Squad attacking Flair last week.

A good portion of this match happened during the commercial break, but the general gist is that Ruby Riott and Sarah Logan kept trying to get involved during the match. Eventually referee Mike Chioda had enough, ejecting the two from ringside while Charlotte was able to get in the Figure-8 for the submission.

Afterwards, Flair went to the commentary desk and made a simple statement: one down, two to go.