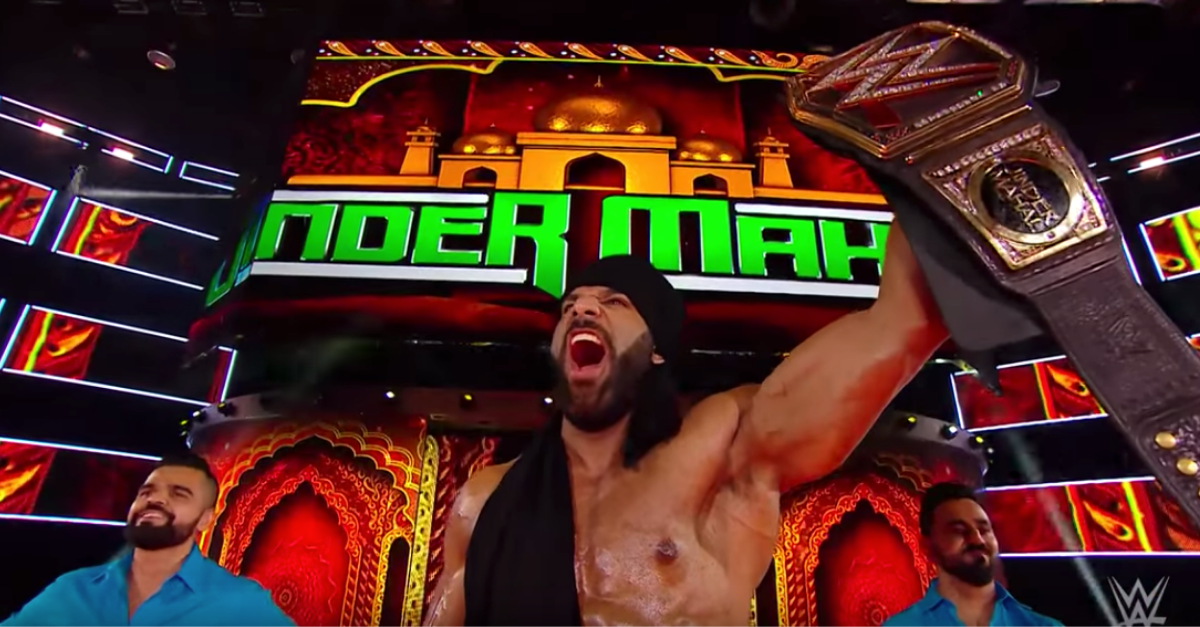 At the WWE Draft, former WWE Champion Jinder Mahal was chosen in round four to become exclusive to the Raw brand. Along with Mahal, former Cruiserweight Champion Buddy Murphy and 24/7 Champion R-Truth were also chosen in this round to be exclusive to the flagship brand. Interestingly, despite being injured, Mahal was drafted during the main show, above several active wrestlers who became free agents as a result of not being drafted to either brand.

Mahal has been inactive from in-ring competition since June of this year, lastly competing against Ali at a WWE live event. For several weeks before being forced to step away, Mahal was heavily involved in the 24/7 Championship picture, winning the title on two occasions. He was also a part of the 50-man Battle Royal at the Super Showdown WWE Network special in Jeddah, Saudi Arabia.

“The Modern Day Maharaja” has been away from the ring due to injuring his knee. Mahal had to undergo surgery and is currently recovering. After reaching out to Mahal for a return timeline, he informed me that he will be returning “not until the new year at earliest.”

A reasonable goal for Mahal’s return would be the Royal Rumble, which is scheduled for January 26. If he is still recovering at this time and unable to return, returning before WrestleMania would certainly be something to shoot for.

After being released in 2014 while he was a part of the 3MB faction with Drew McIntyre and Heath Slater, Jinder returned in 2016 on an episode of WWE Raw, defeating his old stablemate Heath Slater. Even with this quick victory, Mahal’s momentum slowed down with consecutive losses against numerous superstars including Jack Swagger, Sin Cara, Neville, Sami Zayn, Darren Young, and Curtis Axel. In short fashion, Mahal was used more as an enhancement talent upon his return.

Jinder Mahal’s Career Experiences a Turn for the Better

At WrestleMania 33, Mahal did receive some buzz after his involvement in the Andre the Giant Memorial Battle Royal, getting into an encounter with Rob Gronkowski, who assisted Mojo Rawley in winning the match. Mahal moved to the WWE SmackDown brand during the Superstar Shakeup, after losing his last Raw bout to Finn Balor. This moved turned out to be very beneficial for Mahal, as he picked up quality wins against AJ Styles and Sami Zayn, as well as winning the number one contender Six Pack Challenge against Luke Harper, Erick Rowan, Dolph Ziggler, Mojo Rawley, and Sami Zayn.

Within six weeks of being drafted to SmackDown, Mahal won the WWE Championship by defeating Randy Orton in the main event at Backlash, with help from the Singh Brothers. At SummerSlam, Mahal retained the title against Shinsuke Nakamura, even after competing in a marquee main event match on the previous SmackDown against John Cena.

Mahal retained the WWE title for nearly six months, losing to AJ Styles on the November 7 episode of SmackDown in Manchester, UK. As a result of Mahal’s loss, he was unable to face Brock Lesnar at the Survivor Series pay-per-view, which was the match he was preparing for.

A few months later, Mahal reached the finals of the United States Championship tournament, defeating Tye Dillinger and Xavier Woods before losing to Bobby Roode in the finals. However, at WrestleMania 34, Mahal won the US Title by defeating Randy Orton, Rusev, and Bobby Roode in a four-way match. Hey only retained the title for eight days, however, before losing it to Jeff Hardy on SmackDown Live. Since losing the U.S. Championship, Mahal had unsuccessful feuds against Bobby Lashley, Braun Strowman, as well as a loss against Roman Reigns at the 2018 Money in the Bank PPV.

Although the WWE superstar is currently shelved until the beginning of the year, the former champion is hoping to work his way back up to the main event scene, in hopes of another title match. Since he is on the Raw brand, the top names in the title picture include current Universal Champion Seth Rollins, and his upcoming challenger at Crown Jewel, “The Fiend” Bray Wyatt. As we have seen, pro wrestling has presented many surprises in the past, and Vince McMahon can decide again to give Mahal another title reign.

From debuting on SmackDown from WWE NXT in 2011 to commencing an angle with The Great Khali, and eventually becoming a member of 3MB, being released, returning to win the WWE Championship, losing the title and winning the United States Championship, and losing the title to experience a bit of a downturn, Jinder Mahal has been on quite the roller coaster ride during his WWE career. However, Mahal can say that he is in an elite class of being a former WWE Champion, as well as other milestone moments such as competing against Triple H in New Delhi, India.