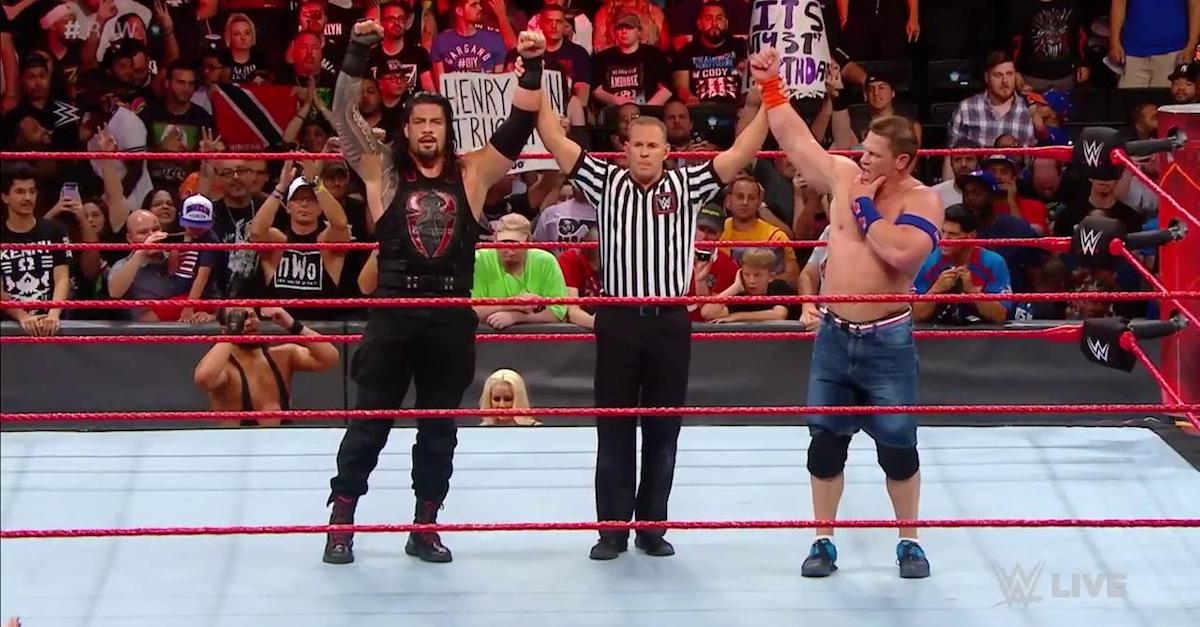 Miz and Joe took turns beating down Cena to open the match. Cena started his comeback before playing to the crowd, giving Miz an opening to attack him.

Cena moved out of the corner to evade Miz’s attack to get the hot tag to Reigns as Miz tagged in Joe.

Reigns loaded up for the Superman Punch, but Joe reversed into a takedown. Joe tagged in Miz, who distracted the ref so that Bo Dallas could attack Reigns from behind. Reigns got knocked outside again, this time hitting the Drive-by on Curtis Axel, a Superman Punch on Dallas and he slipped past Miz to tag in Cena.

Cena got the hot tag, putting down Miz before Joe locked in Coquina Clutch. Reigns attempted to hit the Superman Punch on Joe, but connected on Cena. Reigns and Joe ended up on the outside as Miz set up for the Skull Crushing Finale. Cena reversed into the AA for the three-count.

The show ended with Reigns staring down Cena as Cena’s music played.

Balor hit a beautiful dropkick to down Jordan. Jordan popped up and tried to shake hands, but Balor kicked him the stomach, refusing to step off the gas. Jordan turned it around, but Balor punted his head off the apron. Back in the ring, Jason picked Balor up and drove him back and forth into turnbuckles on opposite ends of the ring. Balor recovered and connected on a dropkick into the corner. Balor took the top rope and landed the Coup de Grace on Jason for the pinfall.

WWE confirmed the main event for No Mercy

Brock Lesnar is set to defend his WWE Universal championship against Braun Strowman.

Alexa Bliss cut Banks off, demanding her rematch for next week.

Rollins and Ambrose cut a promo on being champs again feeling like old times and offered an open challenge to any team in the back. The Hardy Boyz came out and showed signs of their “Woken Brilliance,” before challenging Ambrose and Rollins to a match. They accepted and a ref came out to start the match.

The Hardys and Ambrose-Rollins went back and forth, the duo trading stretches of success. Matt Hardy caught a side effect for the two-count. Matt Hardy hit the Twist of Fate on Ambrose and Jeff Hardy got the tag. Rollins knocked Matt Hardy out of the ring, Jeff Hardy pulled Rollins over the top rope and tried to land the Swanton Bomb. Ambrose got his knees up to block it. Rollins attacked with his knee strike finisher before Ambrose hit the Dirty Deeds for the victory as Sheamus and Cesaro watched on monitors in the back.

Cena hit the ring and said he was coming to Raw to call out a specific member of the roster. Roman Reigns appeared and the two squared off to fight before the Miz hit the ring. Miz cut the promo of his life, complaining about Angle bringing Cena as more talent to Raw when he’s the Intercontinental champion and was left off the SummerSlam card.

Samoa Joe hit the ring, called out Reigns and punched Cena in the face. Chaos ensued that resulted in Reigns and Cena standing tall to a “you both suck” chant.

Enzo cut a promo before the match, saying their rivalry will end right where it began — in New York. Cass hit Enzo with a shopping cart and tossed him into the barricade. Cass gave a chair to Enzo, then hit him with a big boot. Cass attempted a big boot with Enzo on the apron, but he pulled the rope down and Cass fell over the top rope, apparently tweaking his knee. Back in the ring, Cass stomped on a chair as Enzo crawled to it, picked him up and slammed him. Cass tried to go for the Empire Elbow, but his knee buckled under him. The ref called the match and gave the win to Enzo.

Cass was apparently legit injured, which was later confirmed by WWE.

Heyman talked up how Lesnar was carted away from the ring at SummerSlam before eventually overcoming the odds to keep the title. Braun Strowman hit the ring shortly at the end of Heyman’s promo. Strowman then took out Lesnar yet again, hitting a running powerslam twice before holding up the Universal title.