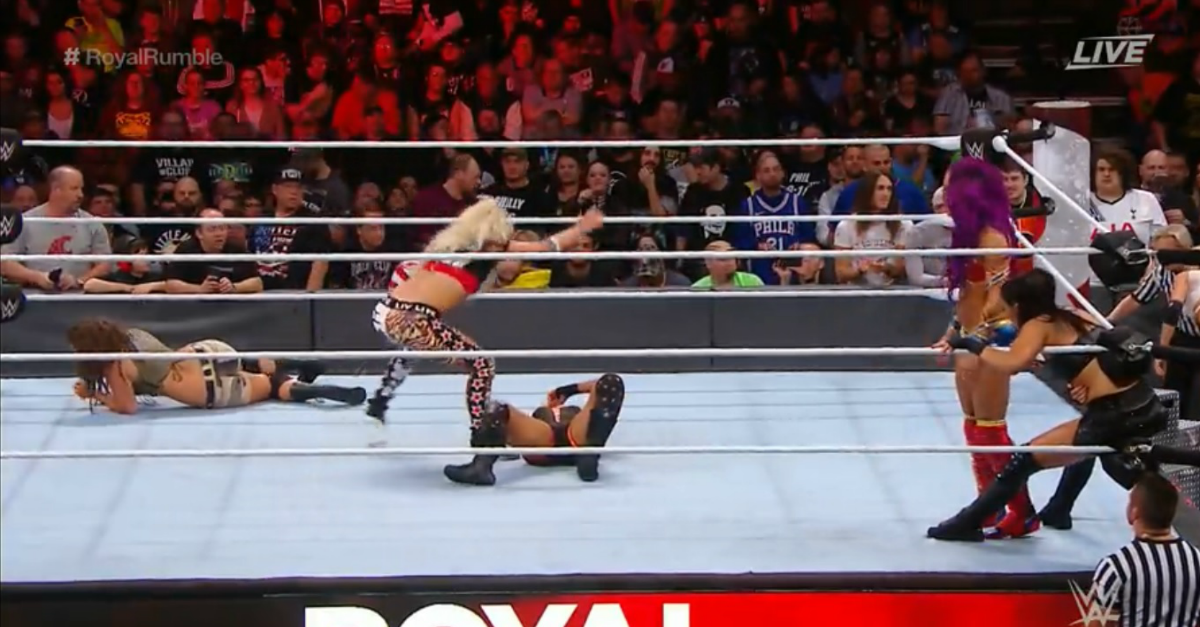 In what was already a historic night, the WWE made more history, having the first ever Women’s Royal Rumble main event on the promotion’s second biggest Network Special.

The first ever Women’s Royal Rumble entry was “The Boss” Sasha Banks. As for the second, Becky Lynch entered the contest.

In fairness, the Philadelphia crowd appeared a little burnt out at this point, but that didn’t last too long as the performers began to put on a spectacle following a methodical start to the match.

Not to mention, at the five spot, WWE Hall of Famer Lita made her return.

At this point in the match, it was, as the cool kids say, lit.

At nine, another surprise from yesteryear, as Torrie Wilson returned.

In all honestly, through the first 10 participants, it was an absolutely stellar start to the historic first ever Women’s Royal Rumble. It had the chance, not even a dozen minutes in, to steal the entire show.

Molly Holly still got it!

The WWE didn’t slow done with returning superstars. Michelle McCool showed up halfway through the Rumble.

Vickie Guerrero also returned, carrying with her the same gimmick she had when she left. While a bit unceremonious, it was nice to see her involved in the event, with the Philly crowd even giving her some love.

Nia Jax came in at 22 and destroyed house, but with the highlight of it being Naomi being saved from eliminated competitors. As Naomi was hanging on for dear life outside the ring, she began to scale the guardrail and make her way back to the ring by crawling with a chair.

Jax would then eliminate her.

However, four-time Women’s Champion Beth Phoenix entered to face Jax. The crowd lost its collective mind. “This is awesome” chants broke out.

At 30, yet another WWE Hall of Fame member made her return to the squared-circle.

Banks was the first of the finalist to go. A great performance by The Boss, having started the entire event.

With only the Bellas left, Asuka overcame all odds to win the first ever Women’s Royal Rumble. It was a match that not only lived up to the hype, but exceeded all expectations.

Following the match, Charlotte Flair and Alexis Bliss entered the ring, holding their respective titles. Asuka having a choice to make, but one not being allowed to happen.

UFC's Ronda Rousey has signed a full-time contract with WWE, according to ESPN’s Ramona Shelburne. pic.twitter.com/ZeGZeSnwHZ

Nothing happened other than her appearing with Charlotte Flair, Asuka, and Alexis Bliss being in the ring.

She walked off after shaking Stephanie McMahon’s hand with her music playing.