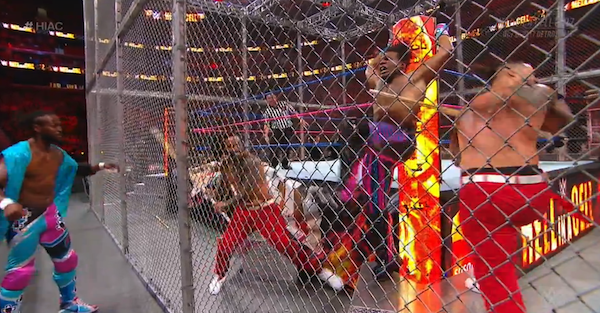 The Usos defeated the New Day in an absolute war, when they connected on a double splash on a handcuffed Xavier Woods, who was underneath a chair to win the Smackdown Tag Team Championship. Woods in particular took a beating when he was handcuffed and hung up around the ring post, where the Usos took turns swinging away at his midsection.

Woods showed the aftermath of that in an Instagram video:

Getting strung up with handcuffs and beaten with Kendo sticks sucks. Losing sucks. Get up, train harder, get it back. #HIAC

The four competitors pulled weapons from under the ring before brawling in the squared circle just after the bell rung to start the match.

Woods hit Up Up Down Down for the two count early. New Day pulled five kendo sticks from under the ring and punished their opponents, barring up Jey Uso in the corner of the cell.

Jey worked his way out and the Usos beat up Big E, hitting a nasty suicide dive into the cell’s cage.

Back in the ring, the Usos hit dual splashes for the two count on Big E.

Big E swatted a kendo stick away back in the ring and took turns slamming each of the Usos around the cell. Big E hit the Big Ending for the two count.

The Usos hit three super kicks on Big E and connected on diving splashes in unison, but Woods escaped from the ring post to break up the pin attempt at two. The Usos turned their attention to Woods and wore him out with kendo stick hits yet again. They set a chair on Woods and hit the double splash on him for the three count.

The Usos have now won the tag team titles five times, with there wins coming for the Smackdown Tag Team Championship.

New Day won the Smackdown Tag Team Championship back in early September for their second title reign from the Usos.