On May 30, 1993, NASCAR fans took a break from their Memorial Day festivities to tune into the 34th running of the Coca-Cola 600 Memorial Day at Charlotte Motor Speedway.

It was the first time that the iconic Cup Series race started in the late afternoon and ended under the lights, so teams had to prepare their stock cars for when the sun went down and the track cooled off. It also gave the fans in attendance plenty of time to tailgate beforehand.

Eventually, Dale Earnhardt got the job done at Charlotte, winning his second Coke 600 in a row, and his third all-time. Though, as you'll see, Dale had to overcome a lot before celebrating in Victory Lane later that night.

Earnhardt qualified 14th for the race, so he started right around the middle of the pack. Just a week prior, he had won the NASCAR All-Star Race (then it was still called The Winston), becoming the first three-time winner of the race. He was determined to use that momentum to claim victory at Charlotte, where he had won the previous year's running of the Coca-Cola 600.

Things looked good for Earnhardt in the beginning. He managed to squeeze his way up to a second-place position. Ninety laps into the race, the second caution flag was waved, and eight laps later, Earnhardt found himself in the lead position for quite a while after that. But, he ran into trouble around the race's halfway point.

Unfortunately, on lap 225, right in the middle of a green flag pit stop, Rusty Wallace brought out the caution flag. During that time, Earnhardt was penalized for speeding on pit road. This meant that he was now a lap down and had to make up some serious time. He pulled ahead of the leaders during the restart and put the pedal to the metal to try and make up some time.

Earnhardt did not hold back, and eventually brought his No. 3 Chevy back up to second position. Even though he was back to the front pack of the group, he still had a distance to go to catch Dale Jarrett in first place. While pushing to close the gap, Earnhardt ran into more trouble as he got stuck behind two lapped drivers: Mike Wallace and Greg Sacks.

Dale Sr. was racing behind Greg Sacks when Sacks spun his car out through the frontstretch grass. This incident brought out another caution flag, which completely eliminated the gap to the first-place car. Dale was hit with some bad news, as NASCAR officials determined that he intentionally spun Sacks to try and eliminate the gap to first place. Frustrated, Earnhardt argued that he didn't even touch Sacks. Whether he did it on purpose or not, he was held on pit road for one lap as a penalty.

For the second time in the race now, Earnhardt found himself a lap down, and he had less than 75 laps left to make up the lost time. He did what he does best, and practically drove the wheels off his car in an attempt to get back to the top. He eventually caught up to the tail section of the field. Rusty Wallace brought out the seventh caution of the day, which put Dale in a good spot and allowed him to catch up and stay pressed on the rear bumpers of the race leaders.

With 39 laps to go in the race, Earnhardt finally made his move into first. Once he was there, he was there to stay, and he took it all the way to the checkered flag for a victory. It was unbelievable, considering all the roadblocks he came across, that he still made his way to the front of the pack. But, hey, that's The Intimidator for you. 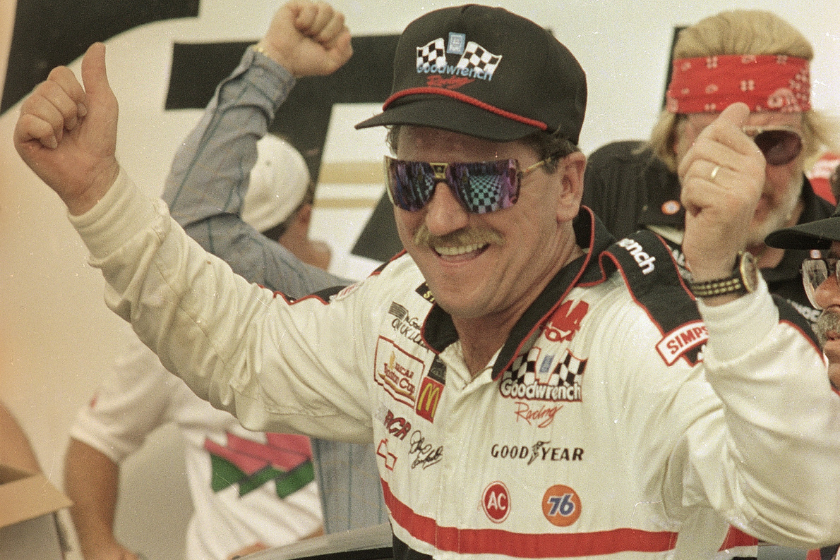 The 1993 NASCAR Cup Series season was the first without Richard "The King" Petty since 1957. Dale Earnhardt made up for Petty's absence with some damn fine racing of his own.

His win at the 1993 Coca-Cola was one of six that season, with his other victories coming at Darlington, Dover, Daytona, Pocono, and Talladega.

Earnhardt's most emotional victory came at Pocono's Miller Genuine Draft 500. After winning, he did a victory lap with Davey Allison's flag. Allison had tragically died five days prior in a helicopter in Alabama. He was 32.

In an interview on Victory Lane, Earnhardt said, "I'd run second to him in a heartbeat if it'd bring him back."

Earnhardt would go on to rack up an additional 11 top-five finishes in '93. His consistent streak would particularly show itself during the late fall races, where he placed second at North Wilkesboro Speedway, third at Charlotte, second at North Carolina Motor Speedway, and fourth at Phoenix.

When Dale came into the championship race at Atlanta Motor Speedway, he only needed a 34th-place finish or better to earn the Cup Series title. He placed 10th. Despite Rusty Wallace winning 10 wins in '93 (a single-season feat that hadn't been accomplished since Earnhardt in '87), including the title race in Atlanta, he couldn't get it done over The Intimidator.

Dale Sr. championship win in 1993 marked his sixth and second-to-last title for Richard Childress Racing. He'd win the title again in '94, putting a cap on his legendary seven-championship run that has only been matched by Jimmie Johnson.