If you were to do a "where are they now" side-by-side look at Brian France and Tony Stewart, you'd see some pretty stark differences. In 2018, France stepped down as the chairman and CEO of NASCAR after he was arrested for DUI and possession of oxycodone. Since then, he's worked as the founder and CEO of Silver Falcon Capital, Inc., a private investment firm based in Charlotte, North Carolina. On the other hand, while Stewart is retired from full-time NASCAR competition, he's still the owner of Stewart-Haas Racing, runs the Superstar Racing Experience series, and has his own NHRA team that he also competes for. It's safe to say that, at least from an auto racing perspective, Stewart is certainly moving the needle more than France.

But, for nearly 15 years, Brian France was Tony Stewart's boss, and sometimes that meant giving the three-time Cup champion some hard truths. During an interview back in 2018, Stewart brought up a time when France really put him in his place. While Tony can't remember the exact reason behind the stern talking-to (he, after all, did get in his fair share of trouble during his racing days), he remembers what France said to him like it was yesterday.

"I remember, Brian France called me down to Daytona one day because I was in big trouble," Stewart recalled. "For whatever it was, I can't remember, one of the multiple things I did to get him mad. But, he said, 'This sport's been here long before you got here and it'll be here long after you're gone.'" 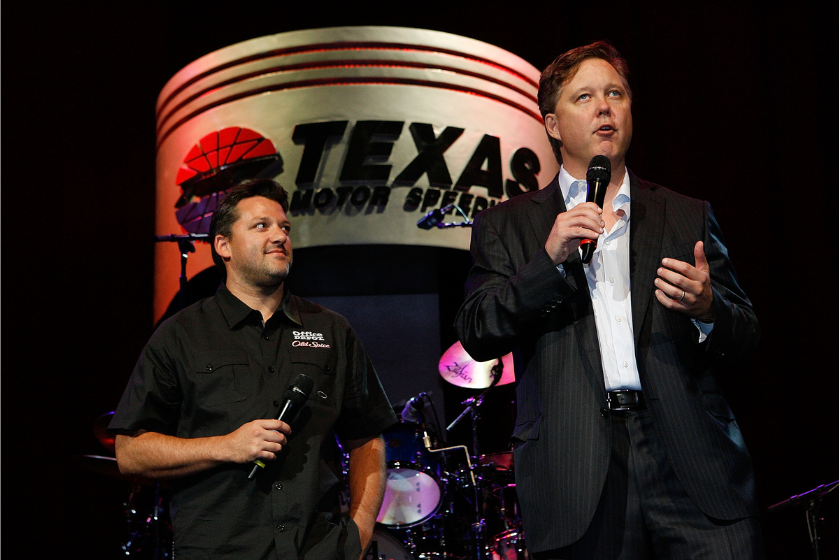 Stewart's comments came during a major transitional time in the sport of NASCAR. You had the likes of Dale Earnhardt Jr., Jeff Gordon, Greg Biffle, Carl Edwards, Matt Kenseth, Danica Patrick, and Stewart himself all retiring in a three-year span. This left a major hole when it came to superstar talent, leaving many wondering if NASCAR's demise was imminent. "The sport's going to be just fine," Stewart assured reporters at the time. "There's plenty of good talent that are makin' names for themselves."

Stewart really wasn't worried. While France had meant to chastise the NASCAR Hall of Famer during their conversation all those years ago, Stewart actually took his remark as a hopeful reminder of the sport's storied history and staying power.

"It really is the truth," Stewart said about France's comments. "There were great drivers before I got here and there's great drivers coming behind us."

"Before it used to be guys getting their opportunity in their late twenties and early thirties. Then it was guys in their mid-twenties, then their early twenties. Now you got teenagers that are getting great opportunities. But, they're producing results, at the same time."

Whether you like NASCAR's current product or not, you have to admit that the young talent is there. Kyle Larson and Chase Elliott have been dominating the last of couple years, while Ross Chastain and Christopher Bell are starting to come into their own. Then, you have the rookies, like 23-year-old Austin Cindric and 21-year-old Harrison Burton, who the jury is still out on. Who knows? The undiscovered second coming of Tony Stewart may be waiting to burst onto the scene in the next couple years.

MORE: Tony Stewart's Promise to His Dad Led to His NASCAR Retirement