If they race at the sport's highest level for long enough, most NASCAR drivers will have at least one wreck that shocks them into the realization that stock car racing can go from fun, hard-nosed racing to life flashing before your eyes in just a matter of moments. For Bubba Wallace, that NASCAR wreck came back in July 2018 at the Gander Outdoors 400 at Pocono Raceway.

With only seven laps left in the NASCAR Cup Series race, Wallace lost control of his No. 43 Richard Petty Motorsports Chevrolet due to a brake failure and slammed hard into the retaining wall coming into Turn 1. Wallace crashed into the wall head-first and at full speed, so needless to say, his ride was completely totaled. He was miraculously able to climb out of the mangled car by himself (safety sure has come a long way over the years), and while he didn't sustain any serious injuries, Wallace called the wreck "the hardest one of my career."

Several months after the devastating Pocono wreck, Wallace, with his crew by his side, finally got to give his car an official send-off at Dale Earnhardt Jr.'s NASCAR graveyard in Mooresville, North Carolina. Wallace, who now drives for 23XI Racing, even held a sort of mock funeral for the Chevy, which you can see in the video produced by Dirty Mo Media below.

Now, holding a fake funeral at a racecar graveyard may seem silly at the surface, but the solemn demeanor of Wallace and his crew members clearly has less to do with the car itself and more to do with the fact that Wallace could've very easily been in much worse shape after the wreck.

To give fans an idea about just how serious Wallace's Pocono crash was, Dale Jr. himself broke down the dark and terrifying thoughts that go through a driver's mind while they're experiencing a wreck during a NASCAR race.

"When you have a failure and there's been some kind of failure on the car where you're either out of control -- you don't have control of the steering -- or you don't have any brakes, and so you're flying into the wall," Earnhardt said, according to For The Win.

Sadly, Junior knows all too well the consequences of a NASCAR wreck. He sustained a number of concussions during his racing career as a result of high-speed collisions, and famously lost his father Dale Earnhardt Sr. following a wreck at the 2001 Daytona 500. Thankfully, Bubba Wallace was lucky enough to not be another tragic NASCAR statistic that day at Pocono. 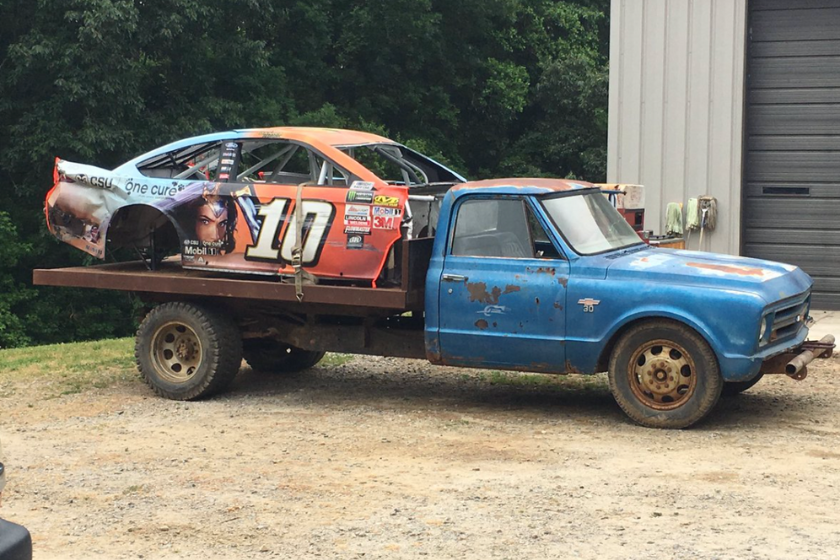 Dirty Mo Acres is what Dale Earnhardt Jr. calls his sprawling property in Mooresville, North Carolina. One of the most unique facets of Junior's 200-acre compound is his Racecar Graveyard, which houses more than 75 wrecked NASCAR race cars, from Aric Almirola's No. 7 Hellmann's Chevrolet Camaro that he totaled during the 2015 season-opening Xfinity Series race at Daytona International Speedway to Danica Patrick's No. 10 Wonder Woman car that ran its final race at the 2017 Go Bowling 500.

Junior started adding to his RaceCar Graveyard back in 2005, and according to its description on the JR Motorsports co-owner's website, it's a place that steeped in somber NASCAR history.

"Once fast and loud, the cars in Dale Jr.'s racecar graveyard now lie silent and idle, slowly succumbing to the clutches of forest undergrowth. Most are faded from years of exposure, battered and bruised, and some are barely distinguishable as to what they once were. Others look surprisingly unspoiled. But they all have a single commonality; each has a story, and that's why each has been laid to rest in the backwoods of Dirty Mo Acres. They will race no more, but in the graveyard the cars are remembered and revered."

If you were to ask Dale himself, he's been maintaining the graveyard as "a way to have something cool out here that someone will stumble upon some day and wonder what exactly was going on and why there are all these wrecked cars laying around." I wouldn't say that "graveyard" and "cool" typically go in the same sentence, but Dale Earnhardt Jr.'s Racecar Graveyard is a clear exception.

MORE: Wendell Scott Was a WWII Vet, a Moonshine Hauler, and a NASCAR Pioneer