Back during his early racing days, Joey Logano earned the nickname "Sliced Bread," because he absolutely dominated on the track. Now, whether or not the Middletown, Connecticut native is the greatest thing since sliced bread is certainly up for debate, but he's definitely one of the greatest NASCAR drivers of the modern era.

With two NASCAR Cup Series championships and a host of other impressive wins under his belt, Logano is pretty damn good at turning left and gets paid a whole lot of money to do it. Here, we'll take a brief look at Logano's racing career and see just how much the 32-year-old race car driver is worth.

From Promising Rookie to Two-Time Champ 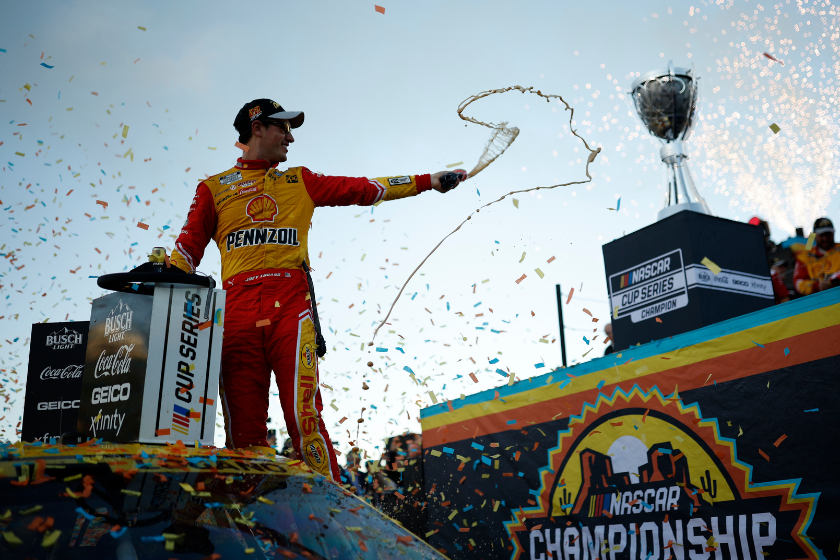 When he made his full-time NASCAR debut back in 2008, Joey Logano started off with a bang. At only 18, he secured his first major NASCAR win and also became the youngest driver to win a race in the NASCAR Xfinity Series (which at the time was the NASCAR Nationwide Series). In 2009, he became the youngest driver to win a Monster Energy NASCAR Cup Series (then the NASCAR Sprint Cup Series) race. That same year, Logano won the Sprint Cup Series Rookie of the Year. From 2008 to 2012, Logano drove the No. 20 Toyota Camry for Joe Gibbs Racing, during which time he racked up two wins, 16 top-five finishes, and 41 top-10 finishes.

In 2013, after struggling during his last couple years at JGR, Logano moved to Team Penske, where he currently drives the No. 22 Ford Mustang. Logano's hot streak picked back up at Penske. In 2015, he became the second-youngest winner of the Daytona 500. After coming a hair away from winning the Cup Series championship in 2016 and missing the playoffs in 2017, Logano finally got his big title win in 2018 at the age of 28.

In the few years that followed, Logano put up some solid performances and earned consecutive playoff spots, but came just short of securing the repeat title run. He finished fifth in the Cup Series standings in 2019, third in 2020, and eighth in 2021. He started 2022 out strong by winning the Busch Light Clash at The Coliseum. He'd also score wins at Darlington and World Wide Technology Raceway on his way to yet another playoff run. Thanks to a win at Las Vegas, Logano punched his ticket to the Championship 4. On November 6, after winning the title race at Phoenix Raceway, Logano won the second NASCAR Cup Series championship of his career.

Here's a snapshot of Logano's accomplishments in the three major NASCAR series. With 504 Cup Series races run, Logano has a total of 31 wins and 55 top-10 finishes. In 176 Xfinity Series races, Logano has 30 wins and 143 top-10s. Finally, he has one win and five top-10s in eight Truck Series races. With stats like that, it's no wonder Joey Logano's net worth is as massive as it is.

What Is Joey Logano's Net Worth? 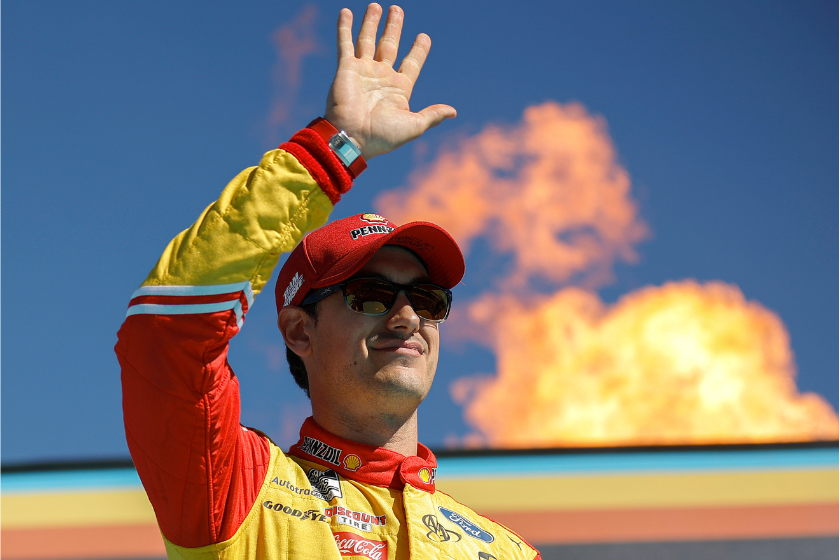 Joseph Thomas Logano has an estimated net worth of $24 million, according to Celebrity Net Worth. He earns around $9 million annually from salary and winnings and another million or two from endorsements.

On December 13, 2014, Logano married his childhood sweetheart, Brittany Baca, and the couple has three children together: four-year-old Hudson, two-year-old Jameson, and nine-month-old Emilia. In 2014, Joey bought the family home in Cornelius, North Carolina for $3.6 million. It has seven bedrooms and seven bathrooms, so plenty of room for friends and family.

Logano also had an pretty impressive luxury car collection, which includes a Ferrari 488GTB, a Porsche 718 Boxer, and a McClaren 570S. All told, Logano has about 35-40 cars in his collection. Aside from the luxury rides, he's also a big Ford guy, with everything from a 1924 Model T to a rare GT in his garage. Considering he's earned the bulk of his money as a NASCAR driver by driving Fords, it's not surprising that he has such a loyalty to the brand.