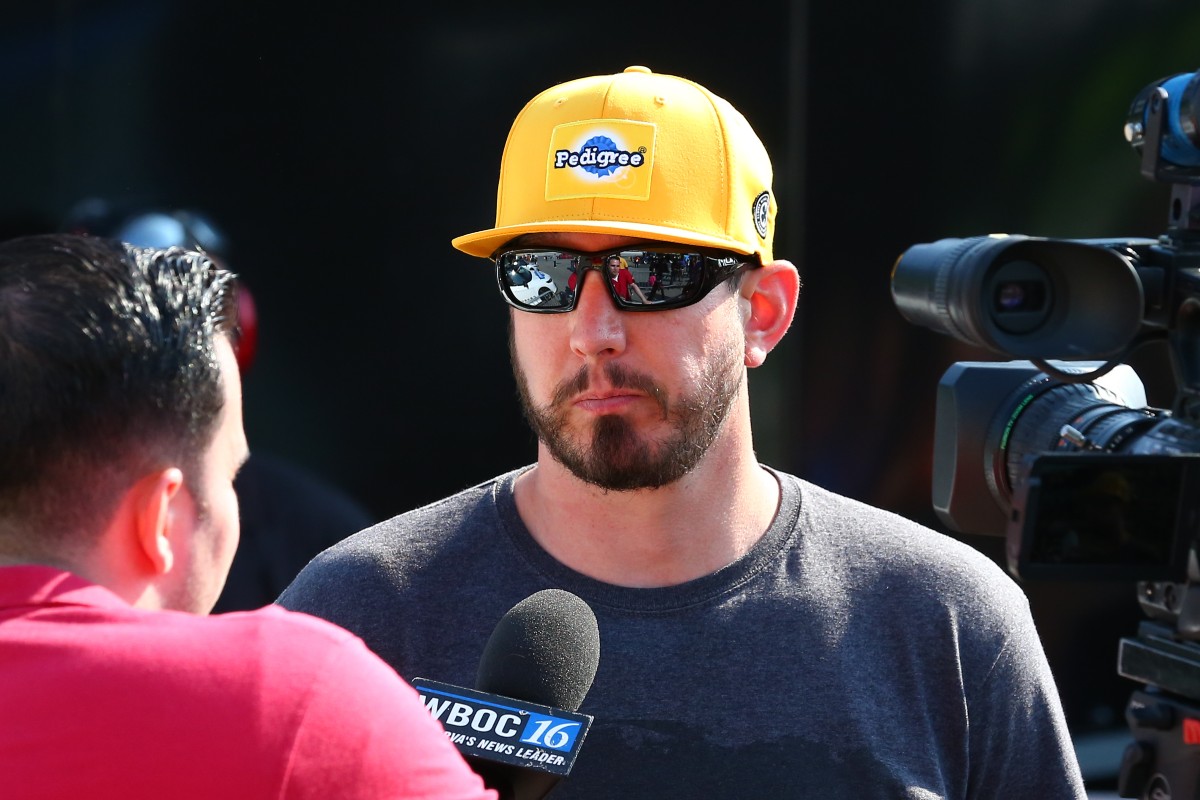 There’s no denying NASCAR driver Kyle Busch’s talent behind the wheel of a stock car.

The Las Vegas native has two NASCAR Cup Series titles to his name, along with 59 wins and 339 top-10 finishes. Throw in his hundreds of impressive finishes in the Xfinity and Truck Series, and you could easily make the case that the veteran Busch will earn a spot in the NASCAR Hall of Fame before he turns 50.

But, while Kyle earned his nicknames “Rowdy” and “Wild Thing” for his driving style, these monikers could also, more often than not, apply to his post-race persona. The driver of the No. 18 Toyota for Joe Gibbs Racing has certainly been known to go on a tirade or two behind the mic.

So far, there isn’t a Hall of Fame wing for interview outbursts, but if there were one, ol’ Kyle would no doubt be first ballot.

From the mic drop in Charlotte to the Brad Keselowski R-word incident, here are five times Kyle Busch got fired up in post-race interviews.

After racing to a second-place finish at the 2017 Coca-Cola 600, Kyle Busch dropped the mic. But, not in the whole I-just-said-something-super-profound-and-this-is-my-exclamation-point sort of way

Busch was asked how he felt about Austin Dillon getting his first Cup win, and took the opportunity to throw a fit.

“I’m not surprised about anything. Congratulations,” Busch said, before putting the cherry on top of the brief retort with a very non-congratulatory mic drop.

Following his media center meltdown, Busch offered his take on why he constantly lets his emotions get the better of him.

“Different people show their emotions in different ways,” Busch said. “Unfortunately for me, mine has never been very gracious — I don’t know that it ever will be.”

?I?m kind of learning that as the days go on. My son is 2 years old, I see where it came from. It’s genetics. I’m sorry, it’s just who I am. That’s what I was given. If there is anybody to blame, it’s probably the guy upstairs.”

Blaming genetics and God for acting a fool at a press conference? Classic Kyle.

Remember a few years back when former NFL star running back Marshawn Lynch graced the sports world with his “I’m just here so I don’t get fined” routine? Well, as it turns out, Kyle Busch appreciated the pettiness.

Busch’s sampling of the infamous quote came after the 2019 South Point 400 at Las Vegas Motor Speedway, after a late-race push to make up some ground didn’t quite go his way. The playoff opener may have ended in a win for his teammate Martin Truex Jr., but Busch’s failure to get the job done clearly weighed on him immediately after the Cup Series race.

Busch deflected the media’s questions in his typical simmering way, but his clear discomfort led to an outburst directed at the guy organizing the interviews.

“I’m answering the dumbest f***ing questions over and over again,” Busch seethed. “Am I good?”

You may not hear the name Brian Vickers too much these days, but back in 2009, the now-retired driver had a bitter feud with Kyle Busch. That rivalry came to a head at the 2009 Carfax 2009 at Michigan International Speedway.

Driving the No. 88 car for JR Motorsports, Brad Keselowski ultimately secured the win, which both Busch and Vickers were vying for down the stretch. Vickers would place second and Busch third, but rather than be happy with a top-five finish, Busch decided to go after Vickers for essentially gift-wrapping the W for Keselowski.

“Unfortunately you race with idiots” was Busch’s harsh dig at Vickers, though the driver of the No. 32 Toyota for Braun Racing got Busch back with a zinger of his own.

“I am so sorry, I forgot it was the Kyle Busch show.”

Sarcasm for the win!

“Pure talent. That’s about it. My pit crew did absolutely nothing to help me out tonight. My truck drove like s***.”

Busch doubled down on his frustration with his team after a fan’s tongue-in-cheek tweet posing if Busch would prefer to service his own truck during pit stops.

“I’d be happy to do it,” Busch replied. “If those r the rules for everyone in the field, let’s rock it!! When u pay people to do a job, they either do it well or get fired. Teach that lesson to your kid so he stays employed his whole life.”

Not even fans are safe from a salty Kyle Busch comeback.

The R-Word Incident at Martinsville Speedway

Back in late October 2021, Kyle Busch found himself trending all over social media for all the wrong reasons.

Brad Keselowski and Busch battled for the win at the playoff race at Martinsville, which culminated in Keselowski trying to push Busch out of the way to gain position.

Even though Busch finished second and Keselowski finished third, the late-race move elicited a post-race rant from Busch, during which he used the R-word in reference to Keselowski’s driving.

Not only did Busch use a slur, but also threatened said he “should beat the s*** out of” Keselowski for his actions. He immediately issued an apology on Twitter.

“In one of my post-race interviews I used a word I should never use and I want to apologize for it,” Busch tweeted.

Busch was forced to undergo sensitivity training following the incident.