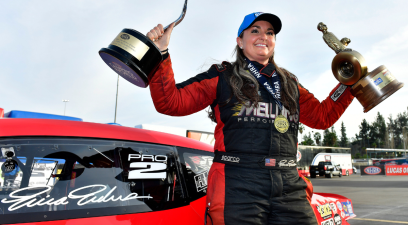 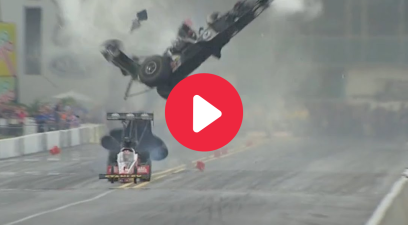 Simply put, Leah Pruett is a badass. And not just because of her drag racing accolades.

Having competed in the the NHRA since 2013, the 34-year-old Redlands, California native has 10 Top Fuel wins, three Pro Mod wins, and three Factory Stock Showdown wins. Pruett, who is also the only female champion in the history of the Factory Stock Showdown class, is as tough as they come. During the second round of eliminations at the Mopar Express Lane NHRA Midwest Nationals back on October 4, 2020, she withstood a crash that would probably cause most pros to call it quits for good.

While her Top Fuel dragster was traveling at speeds around 260 MPH, its frame completely bent, causing the front half of Pruett’s ride to completely disintegrate. She went airborne for a moments, and finally came to a stop near the left lane wall. Amazingly, she exited the race car under her own power, gave a thumbs up to the St. Louis crowd, and stood by for an on-camera interview soon afterwards.

Thankfully, Pruett sustained only minor injuries in the wreck that included some bruises and a sprained back, but as she explained during an interview with NHRA National Dragster, she was prepared for the absolute worst.

“I remember seeing the scoreboards, seeing the sky, and at that point thinking, ‘This is happening,’ but I immediately knew there was nothing that I could do at that point except be along for the ride, because once you see the scoreboards and clouds and the sky, it’s over. It was the quietest time because you’re no longer on earth and the engine is still running but you’re in the canopy, and then I did feel myself changing direction and I thought ‘Please don’t let this hurt’; it was a cringing moment of knowing that I was going to fall at some point.”

“I’m not able to recall the actual touchdown — the Lord gave me a quick moment of taking my memory of the impact away — and I can recall everything from the split second after impact and knowing that I was on the ground. I could feel both [rear] tires and that I had brakes to get that thing stopped. I remember my hands being on the steering wheel and I’m like, ‘What am I doing? I know there’s nothing [front wheels] up there.’ And then it was just the natural reaction to get out as fast as possible. I didn’t know what the fuel situation was or if things are on fire or where Tony Schumacher is at. For me the ride was one; I was tall enough to ride that ride, but the ride was over.”

I don’t know how Leah Pruett was able to come back to the NHRA after her terrifying wreck that day in St. Louis, but she showed what a tough and hard-nosed competitor she is, and continues to be, after her nearly 10 years in the sport.

MORE: From Top Fuel to Funny Car, These 6 Drag Racing Classes Bring the Most High-Octane Thrills