NASCAR vs. NFL: How the Leagues Stack Up in Ratings, Revenue, and More 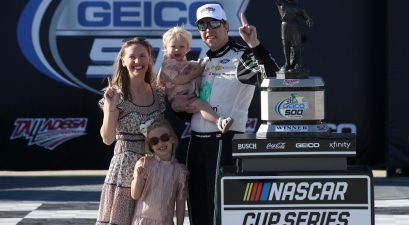 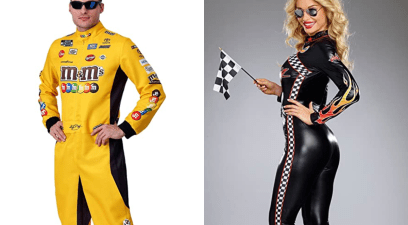 So, who do you think would win in a match-up between the NFL and NASCAR?

You’re probably sitting there, shaking your head, thinking, “What are they talking about? That’s not even the same sport? Football and car racing aren’t the next ‘chocolate-and-peanut butter?’ Not even Tony Stewart could make that work!”

First of all, we’re not talking about a direct mano-a-mano showdown. More like, “when you tally up the numbers of revenue, fans, salaries, viewership, event attendance, etc., what kind of outcome would you expect?”

Second of all, don’t disrespect Tony Stewart like that. He could make it work.

NASCAR vs. NFL: The Series and the Players

First, let’s get a scope of what we’re even talking about. Teams, games, players…all of those things are obviously going to work very differently in the two sports.

Let’s take a peek at NASCAR first. There are almost countless touring series, but let’s just talk about the main three: The NASCAR Cup Series, the Xfinity Series, and the NASCAR Camping World Truck Series.

The Cup Series features 36 season races, each with 40 car-and-driver pairs, with 36 of those spots given to charters. The Xfinity Series, which is sort of the “minor league” of race car driving, also has 40 starters, with 26 scheduled regular season races in 2021. The Truck Series has 32 cars competing at each race with 23 races per season.

The Cup Series features 17 teams, with a maximum of four Cup Series car/driver combos per team. A NASCAR team, however, is not limited to one series. Some of the bigger teams will have driver leagues for both Cup Series and Xfinity Series races, for example.

Compare that to the NFL. There is only one NFL, so the math is pretty straightforward. Yes, there’s the AFC and the NFC, but the divisions play the same game for the same championship title. There are 32 teams of 53 players, with 46 players active for each game. Each team plays 16 games in a regular season.

Then there’s the process of deciding who is the best of the best. The NASCAR “Chase for the Cup” involves 16 drivers aiming for the championship in the last ten series races of the season.

The NFL championship is a little event called the “Super Bowl,” which you may have heard of. At the end of the regular seasons, 12 teams compete in single-elimination playoffs. At the end of each playoff game, the losers go home, and the winners advance to the next game until there are just two teams left.

Annual Revenue for NASCAR and the NFL

Here’s where things start to get a little tricky. To do the comparisons, we’re going to use numbers from the pre-COVID “Before Times.” Back then, you could sell as many tickets as you had room for fans, which meant packing the racetrack or stadium with the maximum amount of bodies.

With that in mind, let’s look at the numbers.

With 256 total NFL games, the franchise brought in $14 billion in total revenue. Most of that is national media, with $1.32 billion in sponsorships. Half of this $14B was distributed amongst the individual teams, with each team receiving $226.4 million.

NASCAR revenue is a little harder to calculate, because there are sanctioning fees, track fees, and a complicated sponsorship program. If you’ve ever bought a ticket for a race with more than three names, you know what we’re talking about.

In 2018, NASCAR reported $660 million per year in television revenue. Broadcasting revenue is split three ways, with tracks getting a 65% cut, teams getting a 25% cut, and NASCAR itself getting the remaining 10%.

What About TV Ratings?

Now, when it comes to TV ratings, things get even more confusing.

NASCAR races take place on Saturdays and Sundays (with the occasional Thursday and Friday) on Fox and NBC networks. NASCAR fans are busy every weekend of the season, with approximately 5 million viewers tuning in to Cup Series broadcasts. The Atlanta Cup Race garnered 5.609 million views in 2018, as an example.

NFL games are much more complicated. Networks can buy packages for the various game nights, which means depending on the night of the week, and the week of the season, you can watch NFL on FOX, NBC, CBS, ESPN, or the NFL Network. Games are played on Monday, Thursday, and Friday nights, as well as Saturday and Sunday afternoons and evenings. The Sunday Night Football broadcasts get the highest viewership, with 18.175 million viewers tuning in on average in 2017.

But, it’s really hard to compare apples to apples here. Some races and football games just get fewer viewers than others, usually due to other events going on the same day. So let’s compare the big guns: The Super Bowl and the Daytona 500.

Yikes. Ok, this is another loaded question, because with pro sports come endorsement deals, sponsorships, partnerships, contracts, and bonuses.

An NFL rookie gets a signing bonus plus minimum salary, which in 2021 averages about $660,000. That being said, if you’re a first round college football recruit for the Jacksonville Jaguars by the name of Trevor Lawrence, you can expect to sign a contract worth $36.8 million, including a $24.1 million signing bonus.

NASCAR’s highest paid driver, Kyle Busch, made $17.8 million in 2019 between salary, endorsements, winnings, and licensing. Before he retired, Dale Earnhardt Jr made $22 million in 2017, alone.

What about someone who’s not quite at that level? A rookie NASCAR driver typically makes between 100 and 300,000 bucks, plus prize money, which averages around $200,000. Endorsements are the big deal here, as evidenced by Jimmie Johnson, who made $16.8 million in winnings, but $5 million in endorsements.

While it’s hard to compare a road course to a running back, it’s clear that there’s a significant disparity between NASCAR and the NFL.

But maybe determining the real winner isn’t based on numbers. There’s no way to measure the passion of the sports fans. While stock car racing fans stand in the hot Florida sun at Daytona International Speedway for a full day, football fans are willing to trek to Minnesota in the middle of a blizzard to watch the Vikings and Packers face off.

Whether you’re more fascinated by NASCAR or fail to miss an NFL game, you are dedicated to your sport, from the preseason to the championship. There is suffering. There are tears. We throw our heads back and sound our barbaric yawps for the wins and losses of the season.

And that type of thing simply cannot be measured.