Arizona Cardinals starting quarterback Kyler Murray has lived up to the hype of the first overall pick in the NFL thus far. The Cards have only made the playoffs once during his time in Arizona, but Murray has definitely made strides in his game that could put his team in Super Bowl  for years to come.

While the QB was throwing touchdowns and winning the Heisman Trophy for the Oklahoma Sooners, he also honed his craft on the baseball diamond. Murray was a prolific outfielder, and scouts say he had a chance to make a Major League roster if he wanted to play baseball.

The "what-if?" question surrounding Murray and his decision to forgo his contract with the Oakland Athletics will permanently be attached to him as well as the spirited social media arguments surrounding it.

How Good Was Kyler Murray on the Baseball Diamond?

RELATED: Kyler Murray's High School Highlights Are Second to None

Murray shined for Allen High School in Texas. As a sophomore, he hit for a .302 batting average and added two home runs, 20 stolen bases and some stellar defense. He found his power stroke over the next two seasons, as he hit nine homers as a junior.

Murray committed to Texas A&M as an infielder but took his talents to the University of Oklahoma shortly after that. His superstardom took off on the gridiron. He eventually became a fantastic baseball player in Norman as well.

The outfielder struggled in his first stint with the Sooners' baseball team, only slashing .122/.317/.122. Hard work in the offseason paid off, and as a sophomore, Murray became the prospect that many thought he would. He hit .296 and totaled a .954 OPS, hitting ten home runs and driving in 47 RBIs.

Although he was considered a bit of a project, the Oakland A's made Murray a first-round draft pick in the 2018 MLB Draft. He was fully set to report to the minor leagues and join the team for spring training in 2019, but his MVP-like performance on the football field changed his mind. 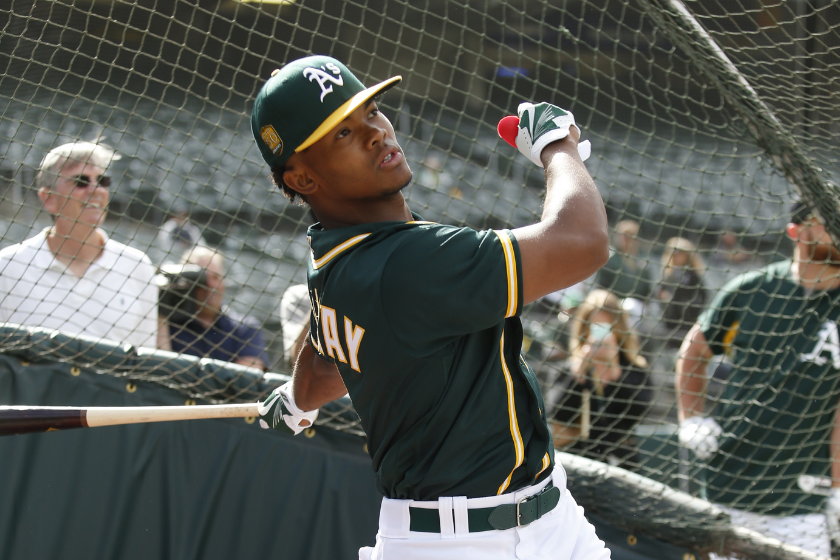 And Oakland wanted Kyler so much they reportedly bumped his signing bonus from $4.9 million to $14 million in the hopes of getting the Sooners QB to pick the diamond over the gridiron. That's a big bet Murry put on himself to succeed in the NFL.

Murray won the Heisman Trophy, was selected with the No. 1 pick in the 2019 NFL Draft, and was named Offensive Rookie of the Year in his first season with Arizona, has been selected to multiple Pro Bowls and the rest is history. He slings the ball against the Kansas City Chiefs, Atlanta Falcons, Los Angeles Rams and Tampa Bay Buccaneers instead of the Royals, Dodgers Braves or Rays.

Kyler Murray became the first athlete ever drafted in the first round of both the MLB and NFL drafts. Bo Jackson was drafted by the Kansas City Royals in the fourth round. Thus, Murray recreated one of Bo's iconic posters to pay homage to a legend:

Kyler Murray is an exceptional football player. His time in one of the NCAA's best offenses cemented his status as someone who should have stuck with the sport.

With that in mind, plenty of players have excelled at both football and baseball. Big names, too: Tom Brady, Aaron Rodgers, Patrick Mahomes, Russell Wilson, Deion Sanders and Bo Jackson all played baseball at high levels (though not all can say they played in Major League Baseball like Deion and Bo). Where Kyler settles into those rankings, is still to be determined.

It remains to be seen whether or not Murray will take reps in the outfield again, but we wouldn't completely count it out. He still has the desire and it would make for an incredible story, but it's more likely he plays for the Seattle Seahawks than the Mariners.

But more and more as the Oakland Athletics attempt to rebuild their franchise for what feels like the 900th time in the last 20 years, Murray's decision continues to appear to have been the right one. If he had signed with the Athletics in 2018, more than likely Murray would have been traded to the Marlins or sent to the Tigers to free up cash.

There's no way that Murray would be the household name he is as the quarterback of the Arizona Cardinals if he had opted to play baseball. Even Mike Trout struggles to maintain his superstar status in the league. As we move further and further down the line in Murray's NFL career one thing remains clear: Kyler Murray made the correct read and turned it into a touchdown.

This article was originally published on April 11, 2022, and has been updated since.