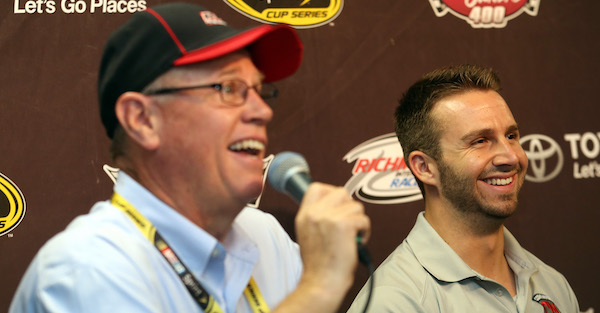 BK Racing owner Ron Devine filed for bankruptcy before the 2018 season started so they could reorganize their debt, and while the team has lost sponsors, they’ve still been able to compete in the Cup Series this year.

ESPN’s Bob Pockrass reported that BK Racing will continue competing over the next three races if they follow two guidelines.

“BK Racing can continue to compete through the three-race West Coast swing as long as it shows proof of workers compensation and commercial liability of insurance, a U.S. Bankruptcy Court judge ruled Tuesday,” Pockrass wrote. “The team earned $450,000 for finishing 20th at Daytona and $92,000 for finishing 36th at Atlanta. Among the March financial estimates of according to attorney statements in court: Assuming a finish of 30th, $385,000 in purse for four races; potential overall revenues of $500,000-$900,000; and payroll expenses and taxes of at least $92,000. A wreck would cost the team $5,000 to $25,000 in extra weekend costs.”

Devine said after the bankruptcy hearing that he is still confident in the future of the team.

The team is planning for Gaulding to race full-time this season, but the bankruptcy issue led to a cause for concern for them for the remainder of the year.

It looks like they’ll be able to compete for at least the next three races, but beyond that is up in the air.