Ever since Talladega Superspeedway opened back in 1969, it's been the site of some incredible motorsports moments. While there haven been some spectacular racing highlights and ridiculous finishes at Dega over the years, the Lincoln, Alabama race track has also seen some devastating crashes in its day.

Of course, you can't look back at some of Talladega's craziest wrecks without mentioning Bobby Allison, the legendary NASCAR driver who founded the Alabama Gang, won a Cup championship and three Daytona 500s, and earned a well-deserved spot in the NASCAR Hall of Fame.

Because of Allison's insane car acrobatics at the 1987 Winston 500, NASCAR required restrictor plates to be used on stock cars that race at Talladega and Daytona International Speedway. All that considered, this has to put Allison's crash at least in the top five when it comes to the most impactful wrecks in NASCAR history.

Bobby Allison Wrecks at Talladega in 1987

It was on lap 22 of that infamous NASCAR Winston Cup Series race when Allison had his brush with absolute disaster, after debris from the racer's blown engine cut his tire, causing Allison's car to go airborne and smash into the catch fence.

Allison was going nearly 210 MPH right around the time that he wrecked, which added to the seriousness of the crash and was also a major influence behind the eventual restrictor plate implementation.

While the Buick race car came just short of entering the grandstands, five spectators were injured as a result of the crash. Two of those injured required hospital treatment (the other three were treated in the infield medical center), while one of the injured actually lost an eye (!) due to the flying debris.

Bobby's brother, Davey Allison, ended up winning the NASCAR race, crossing the finish line in his No. 28 Ford for Ranier-Lundy Racing (which later became Robert Yates Racing in 1989). At least this brought just a little bit of consolation to the Allison family. 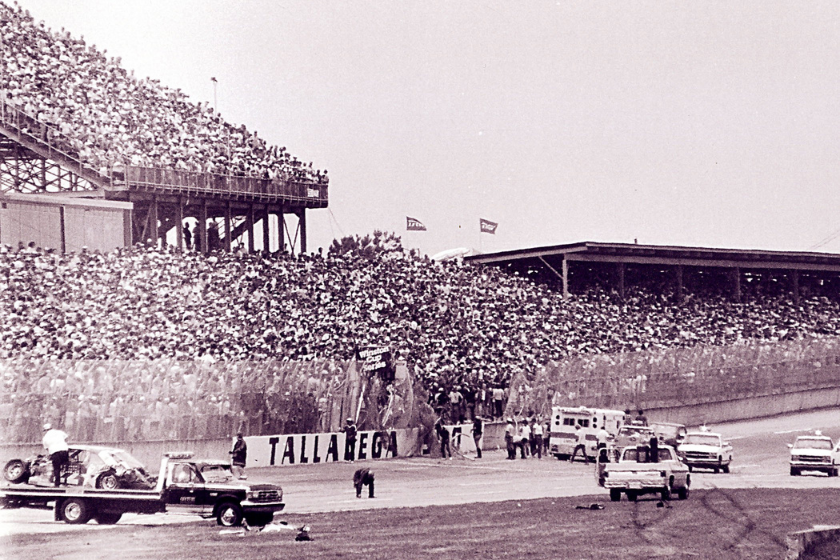 In 1988, the sanctioning body mandated that a new restrictor plate to be bolted onto the engine underneath the carburetor, restricting the amount of air that could get to the engine. The intent was to decrease speeds and keep cars from getting airborne, but the decreased power of the cars due to the restrictor plates also succeeded in creating massive packs on the superspeedways, which in turn led to massive wrecks.

The term "Big One" probably sounds familiar, right? Well, restrictors plates essentially made that a reality.

In 2019, NASCAR introduced tapered spacers to the NASCAR Cup Series, which still restricts airflow, but allows for more throttle response. In essence, the cars are able to create more power, which makes for easier passing.

When it's all said and done, NASCAR's mission to find that balance between safe and exciting racing is constantly a work in progress. But, it's a conversation that probably never would have been brought up if not for Bobby Allison's wreck at Talladega 35 years ago.

MORE: The Big One at Talladega: 4 of the Most Significant Wrecks at the Alabama Track