The Big One at Talladega: 4 of the Most Significant Wrecks at the Alabama Track 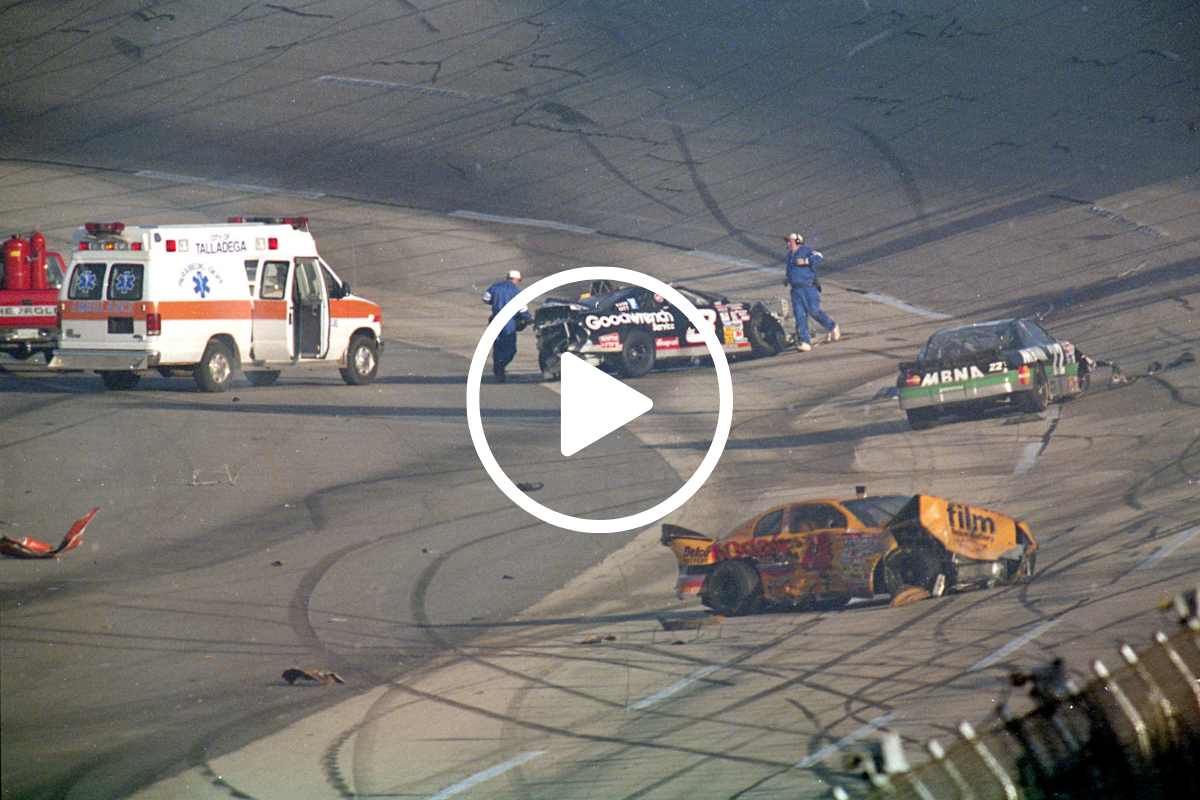 Ever since NASCAR mandated restrictor plates at Daytona and Talladega starting in 1988, the style of racing at those two tracks has changed significantly. As the large packs of cars racing together became more prominent in the 1990s and throughout, the threat of a large accident taking out many cars, a.k.a The Big One, has also grown.

This terrifying phenomenon has unfortunately occurred many times at Talladega. Let’s take a look at the four most significant chain-reaction accidents at the Alabama superspeedway.

4 Significant Big Ones at Talladega

The first major Big One at Talladega since the restrictor plates were mandated went down at the spring Talladega race in 1991.

On lap 71, Ernie Irvan (who earned the nickname “Swervin’ Irvan” by fellow drivers due to his aggressive driving style) tried to squeeze between Mark Martin and Kyle Petty as the pair were racing in the top 10.

With Petty on the outside and Martin on the inside, neither gave an inch. Irvan, Martin, and Petty spun in front of the field and nearly every driver from seventh place on back in the main pack was involved in some capacity.

Petty suffered a broken left femur and was sidelined for a large portion of the 1991 Cup season. The windshield on Martin’s car actually blew out when the car was partially airborne, possibly preventing Martin from turning over and flipping violently.

Due to the severity of the accident, Irvan actually apologized to his fellow competitors at the summer Talladega visit later that season. As fate would have it, Buddy Baker would make contact with Irvan’s car during that Cup race, causing yet another Big One at Dega.

While there was a very large Big One at NASCAR’s spring visit to Talladega in 1996, the summer visit further steered NASCAR towards making safety changes to the cars.

Dale Earnhardt led the big pack of cars as they headed to the tri-oval, with Sterling Marlin on his outside and Ernie Irvan right behind Earnhardt. Irvan’s right front made contact with Marlin’s left rear, sending Marlin into Earnhardt and Earnhardt into the outside wall head-on.

Earnhardt’s car rolled onto its side, and a couple of cars hit the battered No. 3 Chevrolet, turning it over a couple of times before it landed right side up. Earnhardt got out of the car with assistance and then walked to the ambulance, giving a thumbs up to the cheering crowd. Earnhardt suffered a broken left collarbone and a dislocated sternum, which made breathing difficult and moving his left arm nearly impossible.

The front of the roll cage and roof had partially collapsed. Because of this crash and Ricky Craven’s crash during the earlier spring race, NASCAR mandated a new bar on the roll cage going from the dashboard to the top of the roll cage just behind the windshield to minimize frontal collapse.

As such, the Earnhardt Bar was born.

Here’s a trivia fact for you: the Big One at the 2002 Aaron’s 312 was the largest massive wreck in NASCAR’s modern era.

Kenny Wallace went high near the exit of Turn 2 as Scott Riggs tried to pass Wallace. Riggs backed off and Shane Hmiel hit the back of Riggs’ car, turning him sideways into Johnny Sauter. Sauter’s No. 2 Chevrolet flipped on the backstretch.

With Riggs and Sauter’s cars sideways among other cars, the track was nearly completely blocked and cars had nowhere to go.

Only 10 cars on the track avoided the wreck, with three of those in front of the accident when it happened. Of the 43 cars that started the race, 21 of those were running at the finish, but only three cars were on the lead lap.

The fall Talladega visit for the Cup Series had a Big One that had large repercussions throughout the NASCAR community.

Coming into Turn 3 on the final lap, Tony Stewart was leading the big pack in the middle of the track, with Matt Kenseth barely on his outside. Casey Mears was pushing Michael Waltrip on the inside groove, but Stewart went to block the two-time Daytona 500 winner.

Stewart’s block came too late as Waltrip’s car spun Stewart’s. Waltrip’s No. 55 Toyota then went high, with Mears pushing it, and then hit Kevin Harvick in the No. 29 Chevrolet.

Stewart’s sideways car in front of the field then collected around two dozen cars. Being on the outside groove, Kenseth’s car was ahead of the spin and the 2003 Cup champion won the race over Jeff Gordon and Kyle Busch, who went very low on the track to avoid the accident.

As a result of Earnhardt’s injuries, NASCAR instituted an official concussion protocol that took full effect during the 2014 season.