The Brickyard 400 may not have been the longest-running event in NASCAR history, but the Cup Series race made up for its relatively short run with some memorable racing and some classic brick-kissing moments. Held from 1994-2020 at Indianapolis Motor Speedway, the Brickyard 400 was run on a 2.5-mile oval and has fairly recently been replaced by the Verizon 200 at the Brickyard, which is run on IMS' combined road course. 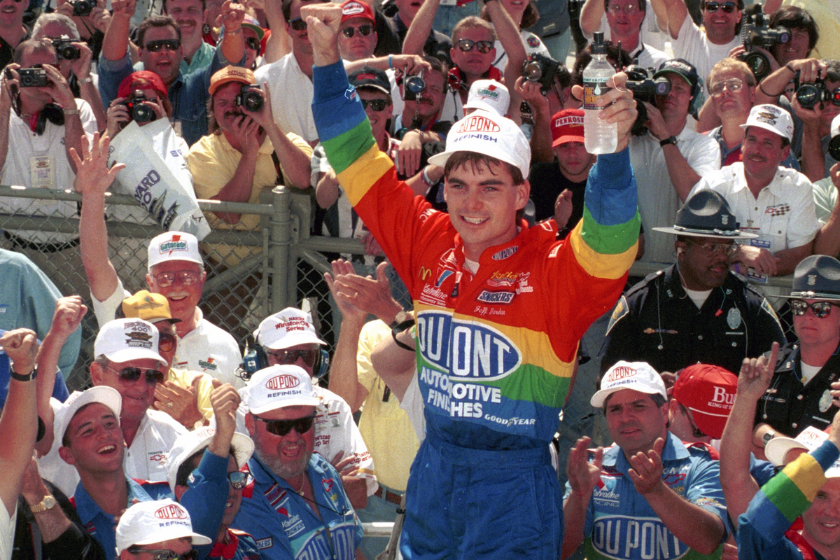 Jeff Gordon was only 23 years old when he won the inaugural Brickyard 400, and it was a momentous day for the future four-time champ and NASCAR Hall of Famer for several reasons. For one, more than 250,000 pumped-up fans attended the race, marking the largest crowd in NASCAR history. On top of that, it marked Gordon's second career Cup win, and he took home a then NASCAR record purse of $3.2 million. So, to say that Jeff Gordon basically took over the sport of NASCAR overnight would be right on the money.

Gordon held off Brett Bodine during the race's final laps to see the checkered flag, and his exciting finish was only trumped by the electric commentary of ABC Sports announcers Bob Jenkins and Benny Parsons.

Jenkins: Years from today when 79 (the number of Indy 500s run prior to the '94 Brickyard 400) stock car races have been run here, we'll remember the name Jeff Gordon, winner of the inaugural Brickyard 400!
Parsons: Man, oh man, oh MAN!
Jenkins: Jeff is screaming on his radio back to the pit crew, "Oh my God, I did it! I did it!"

Gordon's second Brickyard 400 came in 1998, making him the first repeat winner in the race's history much to the chagrin of Dale Jarrett, who dominated the first half of the race but ultimately ran out of fuel and could never regain his momentum. While Gordon was still a relatively young driver at this point in his career, he had already won two Cup titles. His third would come in '98, the same year that he tied Richard Petty for a modern-era record of 13 Cup wins. There really was no stopping the Rainbow Warrior in the late '90s. 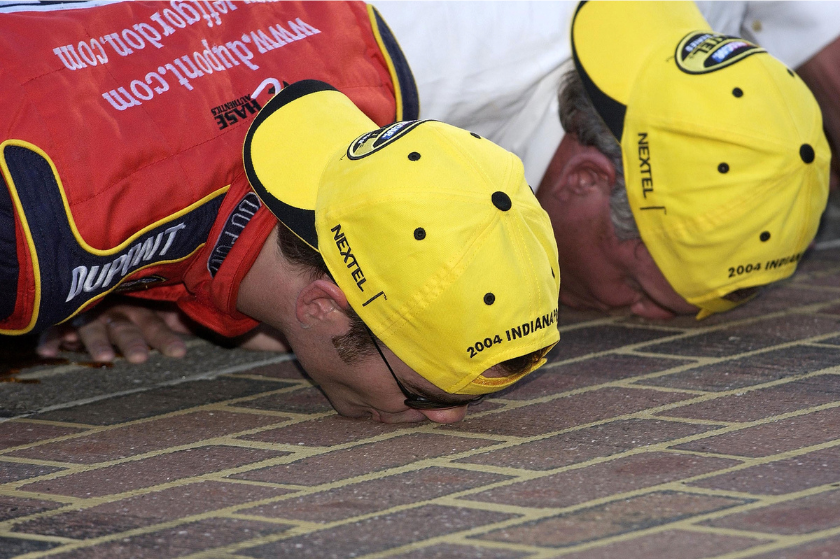 Speaking of Cup championships, Jeff Gordon would win his fourth and final title for Hendrick Motorsports in 2001, racking up six wins and an additional 18 top-10 finishes on the way. Gordon earned his fourth win of the season at IMS, and during his interview with NBC Sports' Bill Weber in Victory Lane, he showed his love to the fans in attendance. He may have been born and raised in Vallejo, California, but Gordon's family moved to Pittsboro, Indianapolis when he was a teenager, and he really started to come into his own as a racer during his time there. To say that Pittsboro is close to his heart would be an understatement.

"It feels unbelievable," Gordon said. "I mean, to have all of these people still here cheering us on I got choked up in the car. It feels amazing. I love Indianapolis. I love the state of Indiana. It's been so good to me. Want to say to all the folks out in Pittsboro, I know they're excited and gonna be celebrating tonight."

When Gordon won his fourth Brickyard 400 in 2004, he also became the fourth driver to win a major event at Indianapolis Motor Speedway four times, joining four-time Indy 500 winners Rick Mears (Gordon's childhood racing hero), Al Unser, and A.J. Foyt. Earning four victories in 11 Brickyard 400 starts, Gordon's 2004 victory marked the shortest span in which a driver scored four major wins at IMS. In the post-race interview following his '04 win, Gordon soaked in the major moment, while also paying respects to the IndyCar icons who came before him.

"You know, I don't compare myself to Rick Mears and A.J. Foyt, Al Unser," Gordon said. "To me, the Indy 500 is always something unique and totally different than the Brickyard 400. I'm very proud to be a four-time winner, but I just will never allow those comparisons to really put us among equals with those Indy 500 winners."

Gordon Makes History With His Final Brickyard 400 Win in 2014 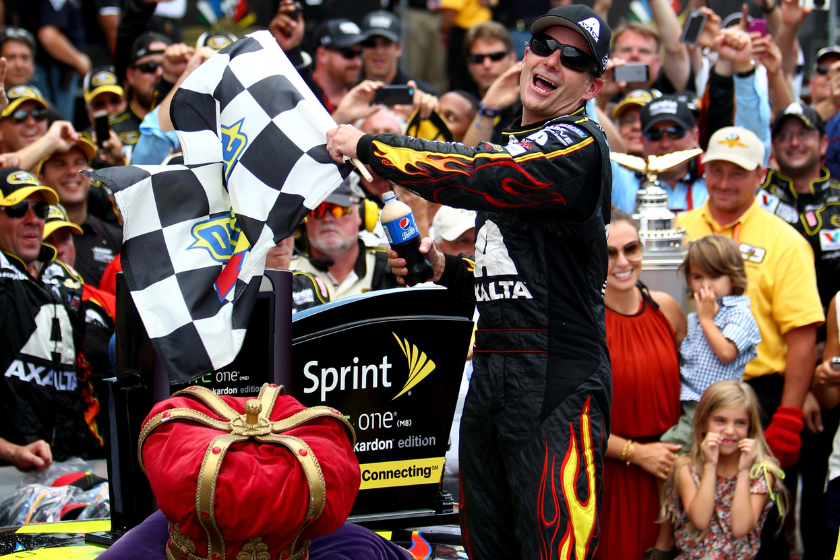 Jeff Gordon's fifth and final Brickyard 400 also conveniently came 20 years after his first win at the inaugural race in '94. Gordon's win marked an historic moment for the now Vice Chairman for Hendrick Motorsports, as he became the second driver in IMS' over 100-year history with five victories, tying Formula One icon Michael Schumacher. Jeff got the chance to celebrate the milestone with his wife Ingrid and their two children, Leo and Ella, in what was easily one of the best moments in his storied NASCAR career.

"I was trying so hard with 10 to go not to focus on the crowd," Gordon said in the post-race interview. "I could see -- every once in a while I'd glance up there and see the reactions and I'd try not to let it get to me. But, man, you can't help it. It's such a big race, such an important victory, a crucial moment in the season and the championship. The emotions take over. I've got my kids here.  There's nothing better than coming to Victory Lane, especially with your family here."

MORE: Jeff Gordon Has Several Records at New Hampshire, But One Big One Eluded Him