Out of nearly 800 drivers who have competed in the Indianapolis 500, 73 drivers have visited victory lane in the 105 runnings of the Greatest Spectacle in Racing.

Of those 73, only four have won the Borg-Warner Trophy four times, with no IndyCar Series driver winning the prestigious Indiana race five times. Let's take a look back at how each four-time winner made it to victory lane at The Brickyard. 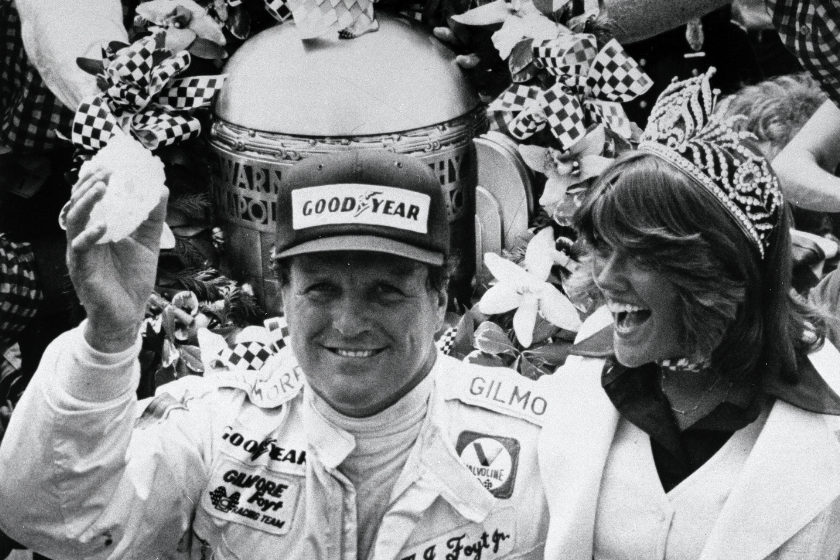 A.J. Foyt, Indianapolis's first four-time winner, first won in 1961 after a strategy miscue ended up playing into the Texan's favor.

Foyt's crew didn't completely fill up his fuel tank during a pit stop, allowing the No. 1 roadster designed by Floyd Trevis to run quicker. This forced Eddie Sachs to run harder to catch Foyt, causing enough tire wear to concern Sachs. Sachs made a late pit stop for tires with under a handful of laps to go, allowing Foyt to charge by into the lead. Foyt led the remaining laps to win the 50th anniversary Indianapolis 500 in his fourth race at Indianapolis Motor Speedway.

In 1964, Foyt benefited from leaders falling out to dominate the final 350+ miles of the race. Bobby Marshman led, but his gearbox failed after the transmission oil plug fell out when the car bottomed out while trying to lap a slower car. Jim Clark then led, but his left rear suspension collapsed after excessive tire wear from his Dunlop tires caused the left rear tire to fail. Parnelli Jones's fuel tank caught fire while exiting his pit stall on his first pit stop. From that point on, Foyt had no real competition for the rest of the race, leading the final 146 laps in a row to win a 500 marred by the deaths of Dave MacDonald and Sachs.

Three years later, Foyt was again a beneficiary of good fortune. Jones started sixth in his turbine-powered car and dominated the race. However, the No. 40 machine had a bearing failure within the final 10 miles of the race, causing Jones to slowly come into the pits en route to a sixth place finish. Coming off of the final corner on the last lap, a multi-car wreck made Foyt slow the No. 14 Coyote as he navigated through the wreckage to win the 51st Indianapolis 500.

In 1977, Foyt again benefitted from racing luck as Gordon Johncock's crankshaft broke on Lap 184. While Johncock took a dip in the infield creek, Foyt sped to the lead and won his fourth 500.

History was also made that day, as Janet Guthrie became the first woman to start the race and Tom Sneva officially broke the 200 mph barrier in qualifications. After the race, Tony Hulman rode around the track with Foyt in the pace car to celebrate the historic occasion. It would be the track owner's final 500 before passing away in October. 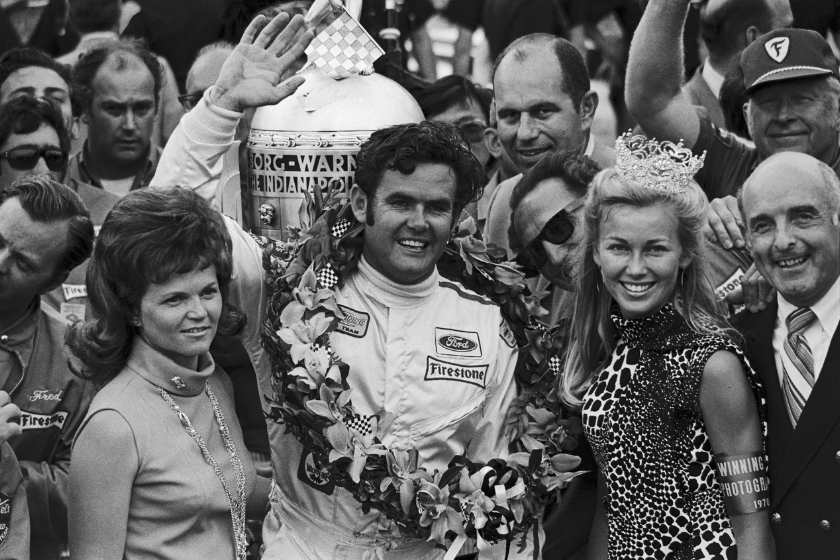 The youngest of four brothers, Al Unser made his mark in the Indianapolis 500 record books by winning both the pole and the race in 1970. In one of the most dominating performances in 500 history, the New Mexico native led the final 94 laps in a row to lead 190 laps to win and match his brother Bobby's winning feat from 1968.

Unser would repeat that win in 1971, but it wasn't quite as easy. McLaren came to the speedway with a car that had front wings and also a rear wing that was part of the engine cover. This configuration allowed Peter Revson and Mark Donohue to qualify 1-2 on the grid with a sizable advantage over the rest of the field. Donohue led early before falling out with broken gears, allowing Unser to assume a lead he would hold for 103 of the final 134 laps en route to his second win for Vel Melitich and Parnelli Jones. Revson finished second.

In 1978, Danny Ongais led 71 laps until falling out of the race on Lap 145, giving Unser the lead. As the laps wound down, Unser had to manage a falling gap to Sneva to win his third 500. The No. 2 Lola hit a tire entering the pit box for the final stop of the race, slightly damaging a front wing. Unser had to reduce his car's speed so Sneva closed the gap, but Sneva couldn't race as fast as his car was capable of because of a dwindling fuel supply.

Unser stayed ahead to win, and Sneva finished second for the second year in a row. Unser would later go on to win the other 500-mile races that year at Pocono and Ontario to become the first driver to win the 500 Mile Triple Crown in a season.

Hollywood would have thrown away the script for the 1987 Indianapolis 500, because nobody would have believed it to be true.

After winning national championships for Roger Penske in 1983 and 1985, Unser was released by Penske in favor of Danny Ongais. Ongais crashed in practice and was not cleared to race after sustaining a concussion. Penske called up Unser to race in Ongais's place, and the team picked up a show car from the Sheraton Hotel in Reading, Pennsylvania to serve as Unser's race car.

Mario Andretti led 170 of the race's first 177 laps before Andretti's pace ruined the harmonic balance of the engine, causing failure. Roberto Guerrero picked up the lead with Unser second, but Guerrero stalled on his final pit stop, his clutch having sustained damage in an earlier incident. Unser took the lead and led the last 18 laps to win his fourth Indianapolis 500 at 47 years of age. 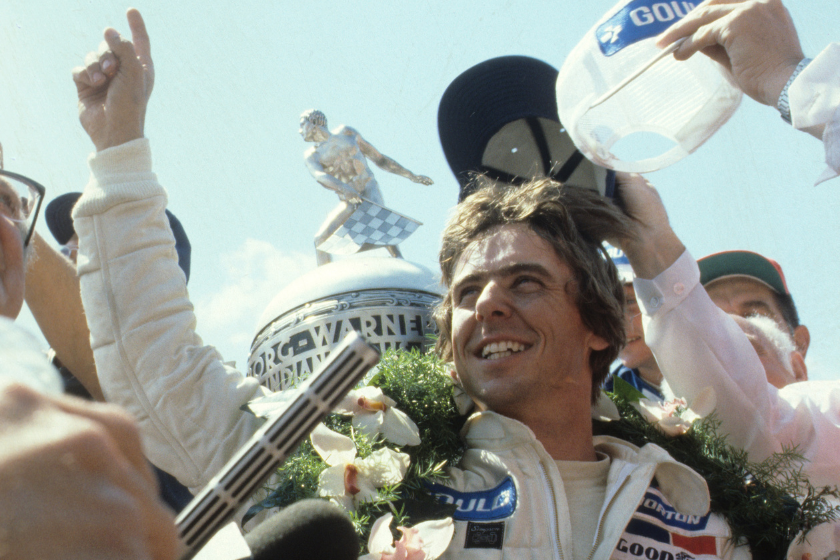 After failing to make the show in 1977 and earning co-rookie of the year with Larry Rice in 1978, Rick Mears started on the pole in 1979 in his Penske PC-6 for Team Penske. Tensions were high in Gasoline Alley as the CART/USAC split raged on in the court room, and a rules squabble required the use of a special qualifying session before the race.

Thirty-five cars started the 63rd 500, as for the first time ever, USAC mandated the use of the pace car to lead the field around under caution periods, replacing the older caution light system. Mears's teammate Bobby Unser was leading in the newer PC-7 model in the final 50 miles when the fourth gear in Unser's transmission broke. Mears took the lead and scored the first win for a Penske-designed car at Indianapolis.

By 1984, Mears had suffered through a disastrous pit fire in 1981 and losing what was the closest race in Indianapolis 500 history in 1982 to Gordon Johncock. As the Penske team went into the month of May with new March 84Cs, Mears qualified third but would lead the most laps as the rest of the contenders fell out.

In a race that had a timing and scoring system failure, a large accident from Patrick Bedard, and another co-rookie of the year performance between Michael Andretti and Al Holbert, Mears's average speed of 163.612 mph broke the record Donohue had set 12 years earlier in Team Penske's first win at Indy.

In 1988, Team Penske locked out the entire front row as Mears became the first driver to break the 220-mph barrier at Indianapolis. Sharing the front row with Danny Sullivan and Al Unser, Mears had handling issues early in the race that were traced to running with the superspeedway rims that the team had qualified with. Mears's crew was busy dismounting the Goodyear tires and remounting them on new rims while the No. 5 PC-17 eventually got back onto the lead lap.

After Sullivan crashed just past halfway with a broken front wing adjuster that made the car understeer into the wall exiting Turn 1, Mears had to race Unser to win his third 500 before a late caution flag for Michael Andretti's right sidepod cover coming loose on the main straight with a couple of laps to go.

After hitting the wall for the first time ever at Indianapolis, Mears qualified his backup car on pole position for the 1991 500, heading up a legendary front row with Foyt and Mario Andretti. Mears fell behind early and was one lap away from going a lap down to Michael Andretti when the younger Andretti had to pit with a deflating tire.

After a late yellow for Sullivan's engine blowing up on the main straightaway, Mears led the younger Andretti on the ensuing restart, but the No. 10 Newman-Haas Racing Lola went around Mears on the outside in Turn 1. Mears used sixth gear and laid rubber down onto the track as he pulled the same move on Andretti in Turn 1.

Despite one more yellow for Mario Andretti's stopped car, Mears pulled away on the restart to win his fourth 500. Mears became the second driver to win the 500 in three different decades and the only driver to win all four of his 500s on Goodyear tires. Mears would retire at the Penske Christmas Party just 19 months later, having competed in 15 500s and starting on the front row 11 times. 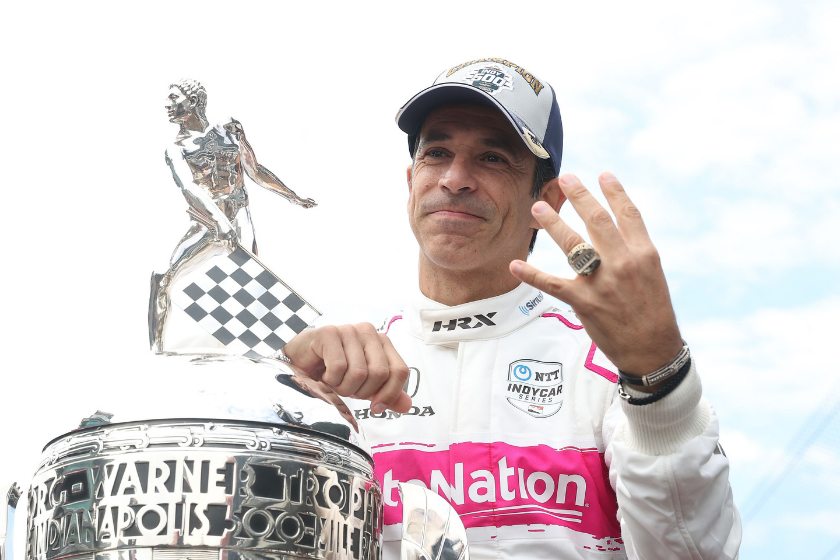 After racing the first two races of the IRL season in addition to competing full time in CART, Team Penske returned to the Indianapolis 500 in 2001 for the first time as a full entrant since missing the show back in 1995.

The duo of Helio Castroneves and Gil de Ferran were part of the CART contingent that went to Indianapolis along with part of Team Green and Chip Ganassi Racing. Castroneves led de Ferran in Team Penske's first-ever 1-2 finish at IMS and led an all-CART shutout of the top six positions. The Penske team would join the IRL full time for the 2002 season.

The very next year, Tomas Scheckter led the most laps in his rookie year at the 500, but the South African racer crashed coming out of Turn 4 late in the race. Under the ensuing caution period, de Ferran lost a wheel after exiting the pits while Castroneves stayed out.

On the penultimate lap, Laurent Redon and Buddy Lazier crashed in Turn 2, while Paul Tracy was attempting to pass Castroneves. It was ruled that Castroneves was ahead of Tracy at the moment of caution, and Castroneves would win a 500 with a finish that has been the subject of some of the most intense auto racing discussions of recent memory.

In 2009, Castroneves started the year on the sidelines waiting for the results of a tax evasion trial. After his acquittal on the Friday of the Long Beach Grand Prix weekend, the Brazilian rejoined the team for that race and the rest of the season, putting stand-in driver Will Power into a part-time role in the team's No. 12 entry.

Castroneves won the pole for that year's 500, a moment that made him emotional on pit road after finding out that weekend that he would become a father for the very first time. After winning the pit stop competition on Carb Day, the No. 3 machine led 66 laps, and Castroneves became the first foreign-born race car driver to win three 500s.

After driving for Team Penske throughout his career, Castroneves joined Meyer-Shank Racing for a part-time schedule in 2021. Castroneves qualified eighth in the No. 06 Honda, and after the caution for Graham Rahal's accident on Lap 118, was in the lead group.

MORE: These 4 IndyCar Drivers Should Be on Your Radar for the 2022 Season