Jeff Gordon won at 24 of the 25 race tracks that he competed at over the course of his career, so needless to say, Wonder Boy has his fair share of track records. One of the tracks where the four-time NASCAR Cup Series champ dominated at back in the day was New Hampshire Motor Speedway. Gordon holds five major records at the Loudon track, including most starts (42), most laps completed (11,363), most laps led (1,371), most top-10 finishes (22), and most top-five finishes (16). Though, if you noticed that there's one major record missing from that list, you'd be right: most wins.

Driving the No. 99 Ford for Roush Racing at the time, Burton did the majority of his winning at New Hampshire in the late '90s, winning the Jiffy Lube 300 three years in a row from 1997-1999. His final NHMS win came at the Dura Lube 300 in 2000. On the other hand, Harvick graced Victory Lane in Loudon for the first time in 2006 when he won the Sylvania 300. Ten years later, he took the checkered flag at the Bad Boy Off Road 300. For wins three and four, the Stewart-Haas Racing driver went the back-to-back route, winning the Foxwoods Resort Casino 301 in 2018 and 2019. When NASCAR heads to New Hampshire on July 17, Harvick will have his shot at finding the W at NHMS once again and pulling away from Burton as the sole winningest driver at the oval.

Considering his recent performances at New Hampshire (fifth-place finish in 2020 and sixth-place finish in 2021), the 46-year-old definitely still has what it takes to get it done. But, he'll also have to hold off the likes of his SHR teammate Aric Almirola, who is the defending NHMS winner, and Brad Keselowski, 2020's winner who also happens to hold the record for fastest qualifying time (27.090 seconds) and could once again find himself in a top qualifying position. Harvick will also need to keep an eye out for Chase Elliott, his rival from last year and the leader in the points standings who's coming off a win at Atlanta Motor Speedway. Clearly, Harvick will have his work cut out for him. But, hey, they call NHMS "The Magic Mile" for a reason. Anything can happen. 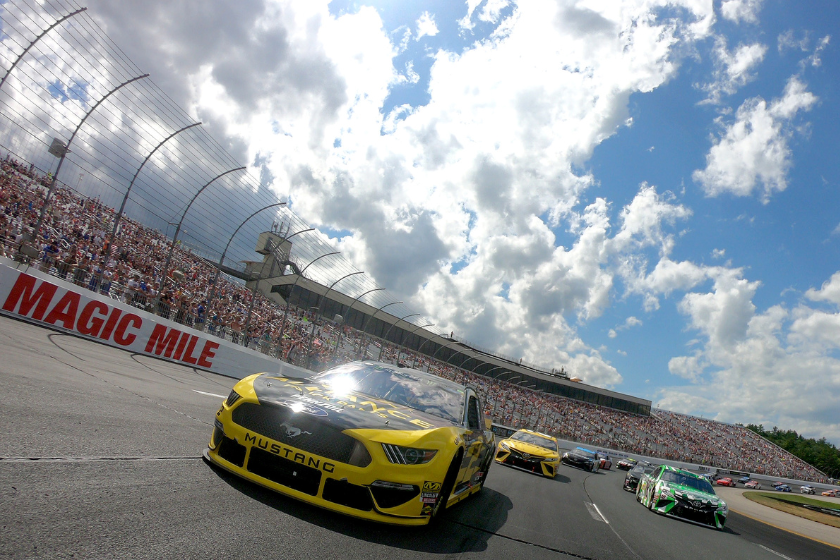 For more than 30 years, New Hampshire Motor Speedway has been the site of a number of memorable NASCAR moments, both good and bad. The 1.058-mile oval in Loudon, New Hampshire is one eight major tracks owned and operated by Speedway Motorsports, Inc., and along with its traditional oval speedway layout, the track is also converted to a 1.6-mile road course for motorcycle race weekends at the Loudon Classic.

The track originally opened as New Hampshire International Speedway back in 1990. It was a result of nine months worth of construction after the Bahre family purchased Bryar Motorsports Park. The road circuit was completely redesigned into a multi-purpose motorsports track, which would go onto include NASCAR, motorcycle racing, go-kart racing, and SCCA racing. Once completed, it became the largest speedway in New England, and after it was expanded, it turned into the largest sports and entertainment venue in the region.

NASCAR first made its debut at the track in 1990 for the Busch Series. From 1992 to 1998, the track also hosted open-wheel race car events for both CART and Indy Racing League, which now is known as the IndyCar Series. In 2002, there was an effort to increase competitive racing at the track. As a result, the track's corners were transformed to include a progressive banking system, changing the angle by around seven degrees. Additionally, SAFER barriers were added to the corner walls in 2003. At this point, there had been a few fatalities on the track, including the Adam Petty and Kenny Irwin Jr. incidents, so multiple changes were made to allow for a safer racing experience.

Many of the New England communities and fixtures experienced damaging floods in 2006, and NHMS was no exception. The infield, and most of the entire track for that matter, took on major flooding while a racing event was underway. There were also other flooding incidents that happened in 2005 and 2009 that impacted NHMS events.

On a lighter note, NHMS introduced its first mascot in 2009: Milo the Moose. He wears a fire suit with the speedway's logo and track name on it, and often wears an open-faced helmet with a dark visor. Watching Milo shake hands with many of the drivers and fans is definitely one of highlights of NHMS race days.

If you ever find yourself in Loudon, New Hampshire, this track is a must-stop destination. You can check out www.NHMS.com for more information about upcoming events.

MORE: Jeff Gordon and His Supermodel Wife Ingrid Have Been Going Strong for Nearly 20 Years