The first African-American woman on a pit crew wants to change the stereotype of ‘white, redneck’ NASCAR 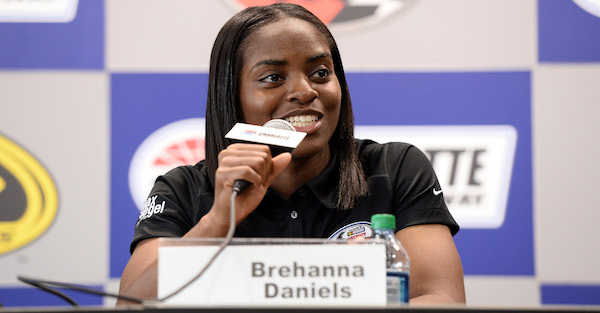 Brehanna Daniels made history last season when she became the first African-American female to pit a car in NASCAR.

Daniels is on the crew for the No. 55 team in the Xfinity Series, and she said via NBC News she wants to change the stereotypes surrounding NASCAR. The sport isn’t very diverse, and Daniels wants fans to see it as more than just a “white, redneck sport.”

“I?m so thankful to be a part of this program that celebrates diversity; to be in a position where other little brown girls, and all girls, can see me doing this and know that they can do anything they want in life,” Daniels said. “We want to change the stereotype that NASCAR is just a white, ‘redneck sport’ Who wants to think of just one race? We want everyone to see, multiple races and multiples faces in NASCAR.”

Daniels appeared on ESPN’s Outside The Lines where she said those considering following her footsteps should follow their hearts if that’s what they want to achieve.

“I would just tell everyone out there to just follow your heart,” she said via For The Win. “I know, you know, just thinking about ? me coming into NASCAR, I had my thoughts, you know, like of what people might think of me or I might not be accepted. But you just have to overcome those thoughts and those feelings and just do what?s in your heart and just trust the process.”

Daniel Suarez, who is from Mexico, is in his second season in the Cup Series.

NASCAR is growing to be more diverse than it has been in the past, which is a great sign for the sport moving forward. If Wallace, Suarez and Daniels continue to be successful, it will pave the way for more diversity in the sport in the future.