About five years ago, Danica Patrick and Ricky Stenhouse Jr. were not only NASCAR Cup Series competitors, but also a serious couple. Their relationship was tested several times on the race track, most notably at the 2013 Coca-Cola 600 when Danica slammed into the back of Ricky and sent him into the outside wall at Charlotte Motor Speedway. Jay Mohr couldn't help by make fun of the incident at the ESPY's that year. It seemed as if there relationship could survive that (both the wreck and subsequent roasting), it could survive anything.

Well, several years later, at the Toyota/Save Mart 350 at Sonoma Raceway in late June 2017, Danica once again wrecked Ricky and ended his day. Career-wise, Ricky would bounce back. He would win the following week's race at Daytona and go on to place a career-best 13th in the Cup standings. But, his relationship with Danica was on the rocks.

After the 2017 season ended, Danica and Ricky called it quits. Did it have anything to do with the wreck at Sonoma? It's highly unlikely, but it's also safe to say that things were probably at least a little tense at home for the next couple days.

It all started when Danica's car ended up getting dinged after Dale Earnhardt Jr. and Kyle Larson got caught up during Stage 2 of the road course race.

The bump sent Danica's No. 10 Stewart-Haas Racing Chevy into a tailspin, but her driver's side back quarter panel caught the nose of Ricky's No. 17 Roush Fenway Racing Ford, ending the day prematurely for her then boyfriend.

"Tell Ricky I'm sorry," Danica later said over her car's radio, though Dale Jr. and Larson were deemed to be the ones mostly responsible for the wreck. Ricky was ultimately credited with a 38th-place finish, while Danica placed 17th.

After placing 25th at the Coke Zero 400 the following week (a race that Ricky won), Danica would go on a solid streak of top-15 performances at Kentucky, New Hampshire, Indianapolis, and Pocono. She would place 28th in the Cup standings, but the end of the 2017 season marked two big announcements for Danica, who made historic strides for women in motorsports by breaking records in both NASCAR and IndyCar.

For one, she would be ending her full-time racing career in 2018 after running in the Daytona 500 and Indianapolis 500 that year. Secondly, she and Ricky were breaking up. 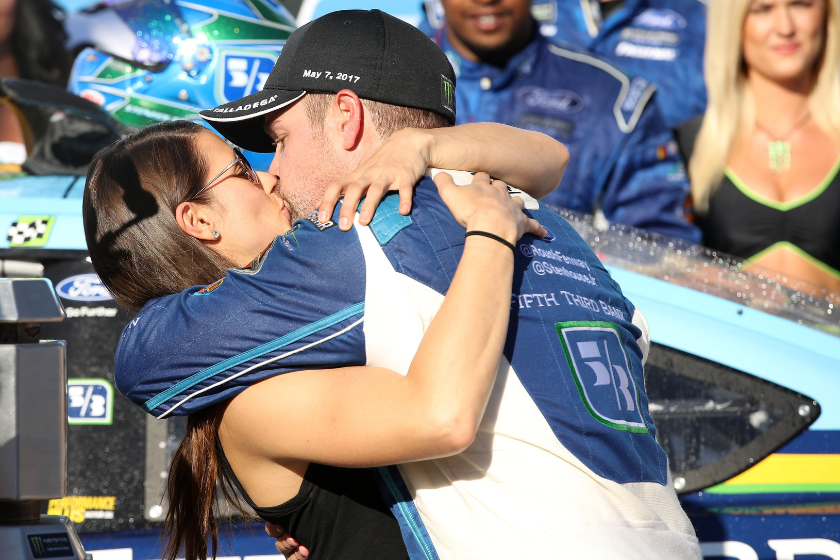 Danica Patrick and Ricky Stenhouse Jr.'s five-year relationship started before they entered their Cup Series rookie seasons in 2013. Patrick and her ex-husband Paul Hospenthal, a physical therapist who Patrick had met while recovering from a hip injury, had just gotten divorced.

It seemed as if Danica and Ricky were soulmates and the ultimate NASCAR power couple. In a documentary called Danica that came out in 2017, the eponymous NASCAR driver said, "The relationship has really evolved into this really comfortable space where we're just really happy. It's really straightforward and simple. And we don't argue."

On April 1, 2017, the couple faked an engagement announcement for April Fools Day, with Danica posting a picture on Instagram of her and Ricky kissing while she had an engagement ring on her finger.

When it came to marriage though, Danica was actually ready for the real deal, with the then full-time driver for Stewart-Haas Racing telling TMZ Sports in July 2017 that she "was ready yesterday" to get married to Ricky. Ricky's response? "Someday, not yet." Yikes!

Danica and Ricky's eventual split was publicly announced in December 2017 (confirmed via Danica's spokeswoman, according to a ESPN report), though it likely was official before that, as Stenhouse showed up stag to the NASCAR Cup Series awards ceremony in November.

In 2018, Danica started dating Green Bay Packers quarterback Aaron Rodgers, while Ricky made things official with Brittany Kellum. Neither relationship lasted. Today, Ricky is engaged to Madyson Goodfleisch, while Danica is recently single, having broken up with Freshly co-founder Carter Comstock in May 2022.