Todd Gilliland has already had a number of major learning experiences during his relatively short NASCAR career. Back in 2019, when he was just a 19-year-old competing in the Camping World Truck Series, he learned one of his more important lessons: never take a shot at your boss.

Now, Gilliland's boss at the time just so happened to be Kyle Busch. In 2019, Gilliland had been running in his second full-time season behind the wheel of the No. 4 Toyota for Kyle Busch Motorsports. Throughout the season, Busch had been extremely critical of Gilliland for failing to perform up to KBM's standards. Well, Gilliland took that personally, and the Sherrills Ford, North Carolina native finally got his first Truck Series win at the NASCAR Hall of Fame 200 at Martinsville Speedway in late October.

Clearly caught up in the excitement, Gilliland said something over his team's radio immediately after his big win that he definitely should've kept to himself: "Kyle Busch, stay in your f***ing motorhome."

What Happened Between Kyle Busch and Todd Gilliland? 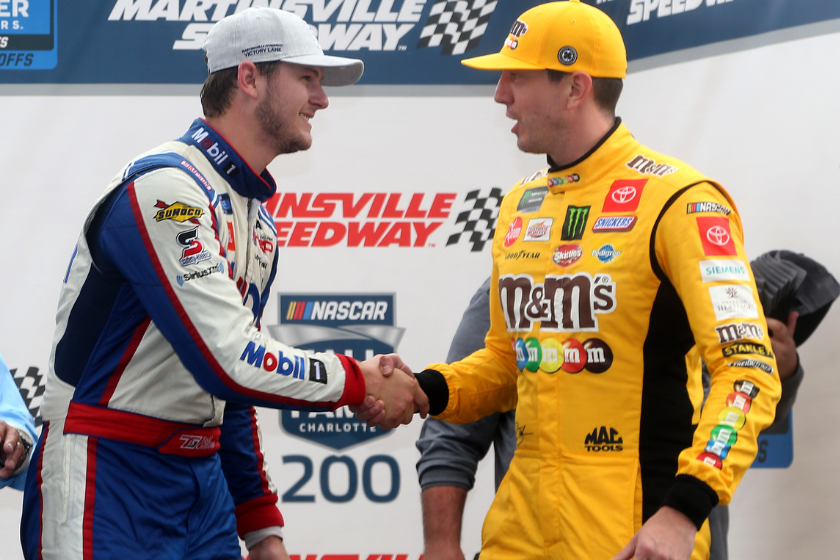 Gilliland's outburst at Kyle Busch was a boiling-point moment that was months in the making. Earlier in the season, Busch said that Gilliland and teammate Harrison Burton "ain't doing s***" in KBM's Toyota trucks that are considered among the best in the Truck Series. The underlying sentiment was that if these young guns couldn't make it in KBM trucks, they really couldn't make it in NASCAR.

Obviously, this hurt Gilliland, and in a later interview, he explained that his "motorhome" comment was a classic case of his emotions getting the better of him.

"It was just kind of heat of the moment really," Gilliland said. "Just a lot of emotions. Everyone has heard what he (Kyle Busch) said and obviously it's true, we should've been running better. I've wanted to win for the last year and a half as well. I'm doing all I can and the guys at the shop are. It was pretty much just heat of the moment. Probably wish I didn't say it now, but it is what it is. He said some stuff about me and it is what it is."

Busch addressed the incident himself during an episode of NASCAR America Motormouths, and insisted that it wouldn't affect Gilliland's future with Kyle Busch Motorsports.

"He went to apologize, kind of the same thing that he said on Twitter," Busch said. "I'm like, 'OK, it's all fine. Not really sure that's the first time you've thought of that because it came so easily.' Everybody's wondering, 'Is he fired?' No, he's going to finish out the season."

Gilliland ran the final two races of the Truck Series season -- finishing 14th at Phoenix and eighth at Homestead-Miami. In 2020, he was replaced by Raphaël Lessard, but Busch's decision to part ways with Gilliland seem to be based solely on performance. It took Gilliland 46 starts to win his first race, which was the longest it had taken anyone to win at KBM. Needless to say, Todd just wasn't cut out for the team, and he finished his last two full-time Truck Series seasons with Front Row Motorsports, seeing the checkered flag only once during that time.

Today, Gilliand drives the No. 38 Front Row Motorsports Ford full-time in the NASCAR Cup Series. While he's (hopefully) put his issues with Kyle Busch behind him at this point, the whole dramatic debacle was clearly an important lesson in being with the right team at the right time.

MORE: Harrison Burton Is Having "Fun Being the Young Guy" in NASCAR