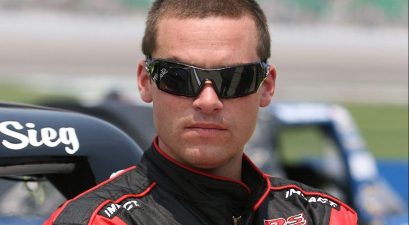 Congrats to Tony Stewart and Leah Pruett on their recent engagement!

On Thursday, March 18, Stewart announced that he and girlfriend Leah Pruett, a popular NHRA Top Fuel drag racer, would be getting married. They had been dating since last March.

So excited to spend the rest of my life with a truly amazing woman. She’s motivated, hard working, funny as hell, and as dedicated to her sport as anyone I’ve ever known. Love you babe. pic.twitter.com/AMJ9sQtjwz

In Twitter and Instagram posts, Stewart wrote, “So excited to spend the rest of my life with a truly amazing woman. She?s motivated, hard working, funny as hell, and as dedicated to her sport as anyone I?ve ever known. Love you babe.”

In her own social media posts announcing the engagement, Pruett added, “The undeniable level of love, happiness and soulfulness we have together is monumental.”

“He might run in circles but he is a straight shooter and the salt of this Earth. Looking forward to a lifetime of sunrises and sunsets that the Lord has gifted us together. Love you babe!”

Both Stewart and Pruett have dominated at their respective motorsports. The 49-year-old Stewart has since retired from racing in NASCAR full-time, but during his career, he became a three-time NASCAR Cup Series champion (2002, 2005 and 2011), and racked up a total of 49 Cup wins. Stewart is also a 2020 NASCAR Hall of Famer and a successful NASCAR team owner, as he co-owns Stewart-Haas Racing. The 32-year-old Pruett, on the other hand, is currently a Top Fuel racer for Don Schumacher Racing and is also a seven-time Top Fuel National Event Winner.

But, back to their love story.

As it turns out, Stewart and Pruett first met when they were introduced to each other via FaceTime conference by NHRA legend Don Prudhomme. Last year, at the start of the lockdowns in United States caused by the coronavirus pandemic, Pruett invited Stewart to stay with friends at Lake Havasu in Arizona. They’ve been together ever since.

?My personal life is the best it’s ever been, by far,? Stewart said. ?She gets me. And I enjoy going to her events and being the one doing the supporting. I mean, if she wanted me to support her at basket-weaving competitions I probably wouldn’t enjoy it, but I am very happy with this relationship and where my life is right now.?

This is not the first time that either Stewart or Pruett have been engaged.

Back in November 2017, Stewart popped the question to model Pennelope Jimenez, but they broke things off before the big day. Pruett was previously married to NHRA crew member Gary Pritchett. She filed for divorce in July of 2019.