You know that classic children's rhyme that starts "first is the worst?" I'll let you finish the rest on your own time, but that opening line definitely rang true when it came to the first-ever NASCAR race run at Talladega Superspeedway.

Located on the former Anniston Air Force Base in the small city of Lincoln, Alabama International Motor Speedway opened on September 13, 1969. The tri-oval, which was constructed by former NASCAR President Bill France Sr. to be faster and longer than the legendary Daytona International Speedway, wasn't called Talladega Superpseedway until 1989. But, it was the inaugural 1969 Talladega 500 run on September 14 that introduced the track to the public. It was not an ideal introduction.

With 62,000 fans in attendance (today, Dega has a total seating capacity of 175,000 spectators), the Grand National Series race was marred by a tire controversy that spawned a drivers' boycott. It is widely considered to be the worst race in NASCAR history. 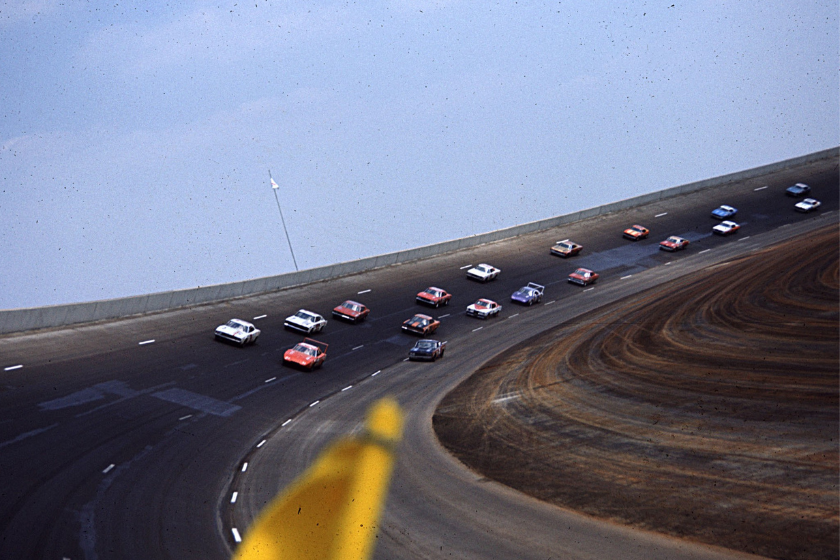 There were plenty of issues ahead of the 1969 Talladega 500 that contributed to it being an absolute Whopper-sized dud. Chief among these issues were serious tire failures that occurred during the race's practice run. To give you some background, this was all happening during the NASCAR tire wars when Goodyear and Firestone were competing to be NASCAR's premier tire manufacturer. So, the manufacturers were sacrificing quality and safety for speed, which led to tire blowouts. In an attempt to alleviate the practice run problems, both Firestone and Goodyear flew down tires that were supposed to last longer. They didn't, and the drivers were fed up. Firestone eventually withdrew their tires from the race as a result of the tire malfunctions, making Goodyear the sole tire manufacturer.

The whole tire debacle spurred Richard Petty, who was the President of the Professional Driver Association (PDA), to lead a boycott of the race. Those who joined Petty in the boycott included David Pearson, Bobby Allison, Donnie Allison, Cale Yarborough, Buddy Baker, Tiny Lund, Ramo Stott, and about nine other drivers. The immediate problem with that? France wouldn't even acknowledge the PDA's existence (the association would later disband after their Talladega boycott). Still, France tried talking things out with the boycotting drivers. They suggested a more resilient tire compound. France refused. As a compromise, France suggested running a slower pony car that reached a top speed of 160 MPH. Drivers were insulted by the idea.

Things all came to a head when France confronted Bobby Allison and LeeRoy Yarbrough the Friday before the race and told Allison, "I think you're just afraid to race." According to Allison, Yarbrough hit France with a sucker punch that knocked him to the ground. Clearly, they were still in the Wild West days of NASCAR. Following the altercation, Yarbrough told all the drivers in the near vicinity, "Boys, pack up your stuff, we're leaving." And that pretty much put an end to any further discussions.

By all accounts, the 1969 Talladega 500 never should have happened, but Bill France Sr. was determined to have it go on as scheduled. In a last-minute scramble, France offered fans free admission to the 1970 Daytona 500 if they bought tickets to the Talladega race. On top of that, Goodyear had a new set of tires flown in the day before race day. It was a valiant effort, but as for race day itself, it was, as you can imagine, pretty much uneventful, save for the introduction of the Dodge Charger Daytona cars to the NASCAR Cup Series.

When it was all said and done, Bobby Isaac won the pole and Richard Brickhouse came away the winner, though even that was the subject of controversy. Jim Vandiver, who ended up finishing second, argued that he had actually lapped Brickhouse and should have been considered the winner. Some racing scholars think that Brickhouse racing in a winged Dodge Daytona race car and Vandiver racing in an older Charger 500 was the major reason behind Brickhouse's win. In any case, it was a confusing ending to the worst race in NASCAR history.

Fortunately, Talladega Superspeedway was able to recover from the disastrous event. Today, the NASCAR runs two Cup Series events at Dega: the Geico 500 in May and the Yellawood 500 in September.