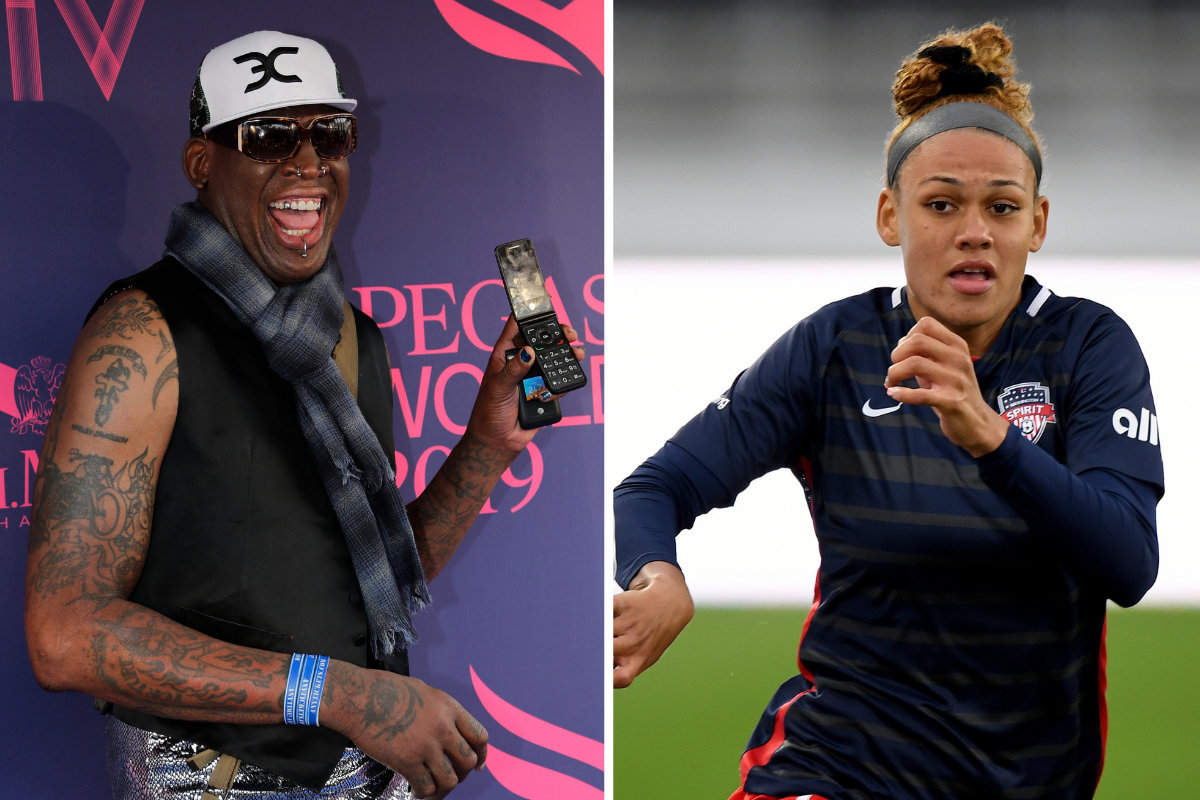 Everyone knows about the NFL Draft, but what do you know about the NWSL Draft?

In February 2021, the National Women’s Soccer League held its eighth draft since 2012. The Washington (D.C.) Spirit selected a young forward out of Washington (the other one) State with the second-overall pick.

In doing so, they drafted the youngest player ever into American women’s pro soccer. Her name is Trinity Rodman and she is the next Women’s National Team superstar.

You read her surname correctly: Rodman. Trinity’s father is occasional diplomat and former NBA star Dennis Rodman. Rodman missed much of Trinity’s childhood and has little to do with her professional soccer career. So we’ll get back to him later. Trinity’s time is now.

Professional sport’s newest Rodman traded the court for the pitch, and has been netting hat tricks ever since.

The youngest NSWL draft pick ever is only 18. She was born in 2002 to Michelle Moyer, who was Trinity’s primary parental influence. Moyer claims she knew Trinity would be a soccer phenom because of how seriously Trinity took the beautiful game from a young age.

Trinity confirmed she has always been competitive in an interview with ESPN FC. She can thank her father for that.

Her competitive spirit led Trinity to Washington State University. Rodman wanted to go pro straight out of high school, which NWSL rules prohibited. Rodman enrolled at Wazoo with her brother DJ in 2020 before the pandemic.

When coronavirus canceled everything, Rodman’s college career was included. Without ever playing a single game in the NCAA, Rodman fulfilled the requirement of attending college before going pro.

Rodman sports undeniably competitive genes. Dennis “Rodzilla” Rodman may not have always been around for Trinity, but athleticism swims laps in her gene pool.

Trinity won’t deny her lineage. But skill like Trinity’s doesn’t come solely from talent. It comes from hard work, practice, and having someone to drive you to and from soccer practice three times a week.

That’s what Michelle Moyer did for her daughter Trinity. And that’s why Trinity scored her first professional goal last month during her National Women’s Soccer League debut.

Washington Spirit head coach Richie Burke has started Rodman in three of the four games she’s played. She made her professional debut in April 2021 against the reigning NWSL champions: the North Carolina Courage.

It only took the young soccer player one hour of professional competition to find the back of the net.

Trinity Rodman scores on her professional debut. Dennis Rodman's daughter said this week “No one asks about my mom because she’s not an NBA star, but I want people to know that my mom’s been my support system in everything in life, she's my rock” 🇺🇸pic.twitter.com/fuCLqtkfb4

Rodman may have won the battle, but the Courage won the war, game, and Challenge Cup, 3-2. Rodman’s courage kept spirits high in Washington despite the loss. She is the youngest player to score in NWSL history.

Record-breaking athleticism runs in the Rodman family. Trinity’s brother DJ Rodman is a Division I basketball star and Dennis’s other child with Michelle.

Yes. If it hasn’t been made abundantly clear, we are talking about that Dennis Rodman.

NBA phenom. Professional wrestler. Playmate playboy. North Korean ambassador. A man I both feared and respected so much as a child that I’m still apprehensive to trash him today. The man is a role model for the talented and the damned, but his daughter Trinity only inherited his talent.

Just like how her basketball player father won NBA championships with the Chicago Bulls, Trinity Rodman seems destined for World Cup glory. Her youth, talent, and resources all put her on a path for gold.

As if USWNT fans didn’t already have enough to celebrate, now we have another Rodman in our lives.

I can’t wait to watch her dominate opposing defenses for World Cups to come. She’s already playing regularly for the U-20 Women’s National Team — a feeder squad for the big girls. She scored eight goals for Uncle Sam during last year’s CONCACAF Championships, which is more than most.

American sports fans have a new Rodman on the horizon. Opponents beware: this one may be even more menacing than the first.

MORE: Dennis Rodman’s Net Worth: How “The Worm” Earned (And Lost) His Money