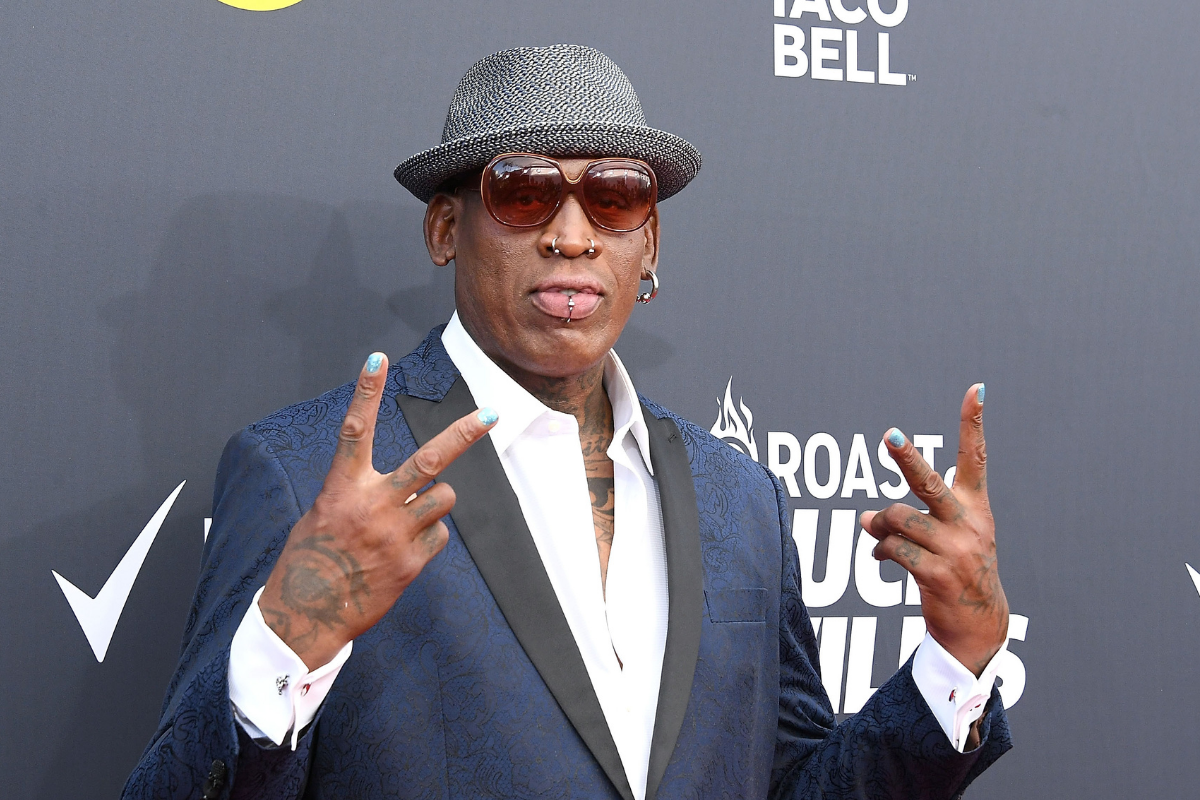 Dennis Rodman has lived one of the more unusual lives of any NBA players in history. Most sports fan know him as a terrific rebounder, Hall-of-Famer and third wheel to Michael Jordan and Scottie Pippen during the Chicago Bulls’ stretch of dominance in the 1990s.

“The Worm” gained notoriety for more than just his basketball skills, including his eclectic style, wild behavior, a failed acting career and his recent hobby as a political diplomat, especially considering his odd friendship with North Korea leader Kim Jong Un.

Rodman dressed in drag. He wore a wedding dress one time to promote a book. He changed his hair color often, sometimes multiple colors at once. He had more piercings and tattoos than one can count on two hands. He even once dated Madonna and was briefly married to actress and model Carmen Electra, as ESPN’s The Last Dance documented. To put it more simply, he didn’t give a damn what people thought of him.

While Rodman built a one-of-a-kind brand during his playing days, he did it without much help from sponsors and endorsements. The 6-foot-7 former player made millions on the court, but he’s not worth as much as you might think today.

Run-ins with the law, marriage and child support issues and other personal problems are all part of why Rodman isn’t worth some of his basketball contemporaries like Michael Jordan and Shaquille O’Neal.

So just how much is Dennis Rodman’s net worth?

Dennis Keith Rodman was born in Trenton, New Jersey, to Shirley and Philander Rodman Jr. His father left the family for the Philippines, leaving Shirley to work multiple odd jobs and raise Rodman and his two sisters, Debra and Kim, by herself in an impoverished section of Dallas growing up.

Rodman was not a standout athlete at South Oak Cliff High School by any means. In fact, his sisters went on to become All-American collegiate basketball players while Rodman took a job as a janitor at the Dallas Fort Worth International Airport after graduating high school.

At the same time, his mother kicked him out of the house and left him with nowhere to live.

“She kicked me out,” Rodman told ESPN in 2019. “She changed the locks. I had, like, a garbage bag full of clothes. I left the house and I just sat on the steps down at the apartment complex with nowhere to go. I went into my friend’s house. He said, ‘You can stay in the backyard, on the couch.'”

Considered too short to make his high school basketball team, Rodman experienced a sudden eight-inch growth spurt while working as a janitor and decided he’d try his hand at basketball once again. He enrolled in Cooke County Junior College and transferred to Southeastern Oklahoma State University. It was there that he blossomed into a three-time All-American that led the NAIA in rebounding twice before being noticed by NBA scouts at the Portsmouth Invitational Tournament.

The Detroit Pistons selected Rodman in the second round (27th overall) in the 1986 NBA Draft, and by his fourth season in the league, the small forward was named an NBA All-Star in 1990. He won his first two NBA championships there in 1989 and 1990.

Rodman’s cemented himself as one of the NBA’s greatest rebounders in history in the 1990s. From 1992 to 1998, he won seven consecutive rebounding titles, and he did it across three different teams.

After spending two seasons with the San Antonio Spurs in ’94 and ’95, he joined forces with Jordan and Pippen to create a dynasty in Chicago. The Bulls won three straight titles from 1996-98, a time in which Rodman became a household name. He wrapped up his playing days with the Los Angeles Lakers for one season and the Dallas Mavericks for his final season in 2000.

According to Spotrac.com, he raked in more than $27 million in career earnings on the court. At the height of his NBA career with the Bulls, he took home $9 million in 1997. Jordan, for comparison, earned $93 million over 15 seasons with the Bulls and Wizards.

A lot of absurd characters in @NBA history, but Dennis Rodman might take the cake. Dude rocked a wedding dress. pic.twitter.com/kbCB3kBNzY

Rodman tried a little bit of everything career-wise after retiring from basketball.

He was at one point a professional wrestler and actor. He was a member of New World Order, a professional wrestling organization that featured Hulk Hogan. Rodman didn’t just win NBA rings, he won in the wrestling ring as well — he won the inaugural Celebrity Championship Wrestling tournament and wrestled alongside Hogan in World Championship Wrestling (WCW).

Rodman’s appeared in movies, reality shows and even lanched his own MTV talk show, The Rodman World Tour. His lead roles in Double Team (1997) and Simon Sez (1999) earned him negative reviews. He appeared on Celebrity Big Brother, Love Island, Celebrity Apprentice (twice) and even won $222,000 for winning ABC’s Celebrity Mole in 2004.

The former NBA player wrote two autobiographies, Bad As I Wanna Be and I Should Be Dead By Now. He also joined OPENSports.com in 2008 as a spokesman and blog writer.

His business interests are about as varied as they come.

In 2005, the retired professional basketball player was named commissioner of the Lingerie Football League. He’s been on multiple trips across the world sponsored by companies — a gambling company sent him to the Vatican City for the selection of a new pope in 2013 and a marijuana cryptocurrency sent him to North Korea for the 2018 summit between North Korean leader Kim Jong Un and Donald Trump.

“Why it’s been left to me to smooth things over, I don’t know. Dennis Rodman, of all people,” Rodman told Sports Illustrated after a visit to North Korea in 2013. “Keeping us safe is really not my job; it’s the black guy’s [President Obama] job. But I’ll tell you this: If I don’t finish in the top three for the next Nobel Peace Prize, something’s seriously wrong.”

In addition, Rodman launched Bad Boy Vodka in partnership with Premier Brands and was featured on a hip hop album, Mansionz, in 2017.

How He Lost His Money

Dennis Rodman and Carmen Electra at the opening of the Planet Hollywood restaurant in Montreal, 1998 pic.twitter.com/vhRHpZpdx4

Known for his antics, Rodman was fined plenty of times on the court.

Off the court, Rodman’s life remained hectic as well.

He’s been married three times — to Annie Bakes, Carmen Electra and Michelle Moyer — and has three children — Alexis (with first wife Annie), Trinity and DJ (both with Moyer) — in total. In 2012, his lawyers said he couldn’t afford the more than $800,000 worth of child and spousal support he owed to one of his ex-wives.

Trouble with the law was common for Rodman, a man who clearly had demons. When he was married to Carmen Electra, they were both arrested in 1999 for a domestic disturbance call. Not long after, he was arrested for drunk driving and was only fined $2,000. Police one time found him asleep in his truck in the Pistons’ arena parking lot with a loaded gun in his lap.

The Worm. Dennis the Menace. Rodzilla. Call him what you want and form whatever opinion you want, but you can’t deny he was a pretty great basketball player.

Rodman captivated people because he was authentic, even if it was sometimes shockingly different than how most star professional basketball players looked like and how they acted.

Rodman’s net worth is just $500,000, according to Celebrity Net Worth and Wealthy Gorilla. That isn’t all that much for someone in the NBA Hall of Fame with one of the more recognizable names and appearances in the history of the sport.

Still, the 60-year-old Rodman is probably going to continue living his life how he wants. That’s all he knows.

This article was originally published November 26, 2019.

MORE: Michael Jordan’s Net Worth Makes “His Airness” the Richest Athlete of All Time