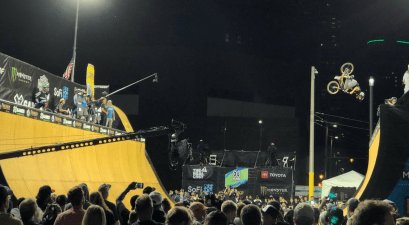 Skateboarding is not a sport for the scared. Broken bones and concussions are common for the dangerous hobby in which the only thing between a high-flying skateboarder and the pavement is a wooden plank supported by four wheels.

The X Games, or the Extreme Games, multiplies that hazard level tenfold. Since 1995, crazy athletes on skateboards, snowboards and even motocross bikes put their lives on the line to put on a show in the competition. It’s where Tony Hawk landed never-seen-before tricks, Travis Pastrama flipped twice through the air and so many more stars became household names.

All the gold and glory comes with risk, however. Caleb Moore died after his snowmobile landed on him after attempting a backflip in the 2013 Winter X Games. Plenty more of these insane competitors have sustained broken bones from falls.

One of the more famous falls in X Games history came in 2007, when skateboarder Jake Brown fell nearly 50 feet in the air and lived to tell the horrifying story.

I was off twitter all weekend, so two quick updates: 1) I was watching X Games w/ my brother and the topic of Jake Brown's 2007 accident came up, and I can't get over it (he was ok!): pic.twitter.com/KkBKwAdIBY

Jake Brown was a 32-year-old skateboarder who had already begun to make a name for himself out in California after moving from Australia in 1997. Known for his fierce nature and wicked skating abilities, Brown took a silver medal in the 2006 Summer X Games.

A year later at the same event, tragedy struck.

When Brown began his run on in the Big Air Final at X Games Los Angeles in the Staples Center on August 2, 2007, he never thought he’d finish it flirting with death.

Brown picked up speed as he wheeled down the MegaRamp — a 70-foot-tall and 330-foot-long structure invented by skater Danny Way — and landed the first ever 720 in Big Air history as he soared across the 55-foot gap. The announcers, including Tony Hawk, lost their minds in disbelief.

That part was truly majestic.

What followed after was harrowing.

Brown lost control on the second part of his run at the quarterpipe and soared 19 feet above the highest point of the structure. He fell 47 feet, a free-fall of more than four stories. His legs pedaled an imaginary bike in mid-air while his mind thought, “How do I survive this?” before falling as hard one ever has.

“I was too far to the left of the ramp, so I started carving across toward the right and I tried to straighten up when I was going up the transition,” Brown told The Los Angeles Times in 2007. “And I started sliding a little bit and the only way to get out of that was to compress, and once I compressed I just shot myself out to the flat.”

Brown’s body was limp on the ground. Medical professionals rushed to help him.

Bob Burnquist, the skater slated to go next, thought Brown was either dead or paralyzed.

“I was the last guy to go but I wasn’t going to go again if he was dead or paralyzed. When he got up and people started looking at me wondering what I would do, I said, ‘Yeah, I’m going to take my run.’ I remember having this roller coaster of emotions,” Burnquist told ESPN. “I wanted to end it on a good note; I didn’t want people to think we die on these ramps. So I put this run together and all of a sudden I won the gold. So not only was he in the ambulance but I took a gold medal from around his neck.”

Brown survived. He walked away (with help) with a fractured wrist, fractured vertebrae, bruised liver, bruised lung, ruptured spleen, whiplash and a concussion. He spent three days in the hospital and was off the board for three months.

According to OffGridWeb.com, humans have a 50 percent chance of surviving a fall of 48 feet. Sure, Brown had a helmet and knee pads, but he was still lucky he survived and is walking today. Brown’s friend and fellow skater Pat Duffy had just suffered a fall much shorter but broke both of his legs in 2006.

Brown’s former team manager, Bill Weiss, described what it was like watching the fall unfold.

“He landed it and it caught everyone off guard. It was a huge adrenaline moment but before I knew it I could see his balance was tilted backward and when I saw him go up and out, I just immediately started to make my way down,” he told ESPN. “I didn’t even see him hit the ground. I heard it and jumped over the railing and got to him as quickly as I could.”

What’s amazing is that Brown took home the silver medal from that competition after his third run.

Where is Jake Brown Now?

Brown became famous for his bone-shattering fall. Larry King Live and The Today Show welcomed him on to tell his story.

After not skating for more than three months following the accident, Brown amazingly returned to the MegaRamp and won a Big Air gold medal at X Games Los Angeles two years later in 2009. He repeated in 2010.

The following year at an X Games event in Brazil, he became the first person to eve land a 720-degree ollie in the Big Air category. He then repeated the feat that same year in Barcelona, Spain.

These days you can find Brown on Instagram (@sk8borders). And yes, he’s still skating. Somehow.

Was a tough decision to go in this @xgames thought I could do what I needed but the confidence wasn’t 100 on the fresh broken arm , sorry to @leoruizskt who was first alternate and in my opinion should have been in the contest anyway – we gettem next year brudda ❤️ big shout out to @monsterenergy for taking care of me 🙏