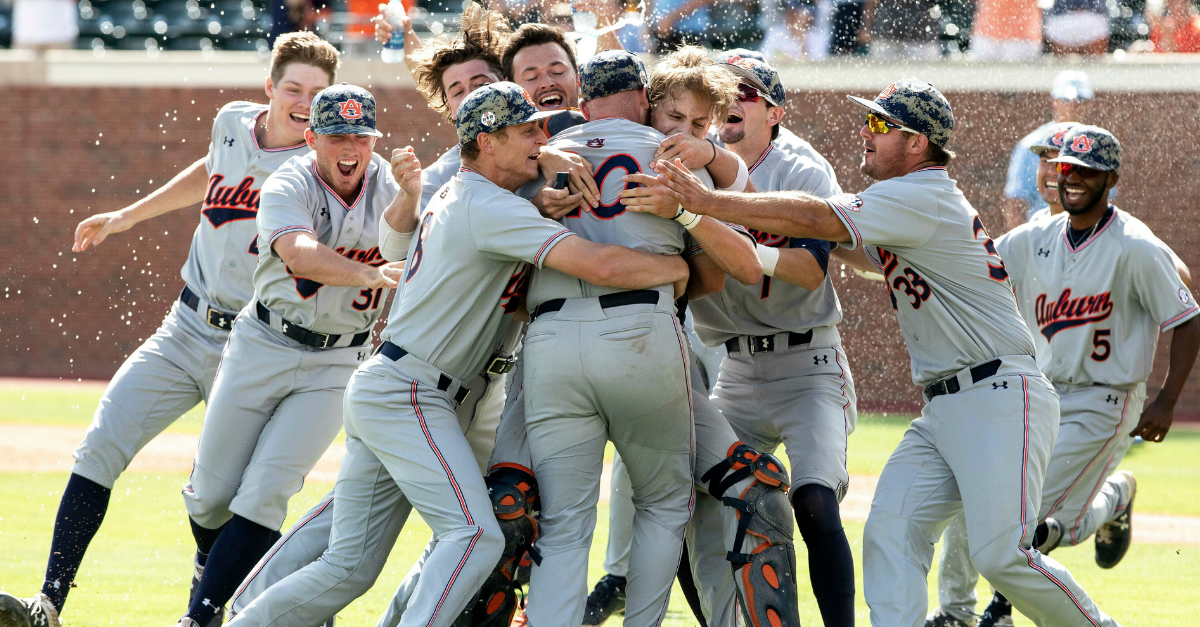 Some might call it fate. Others will say it was pure luck. The Auburn Tigers simply don?t care what you label it as, though. All that matters is the roller coaster season has this team headed to the College World Series.

After taking down the Georgia Tech Yellow Jackets in the NCAA Regionals, and splitting the first two games of the NCAA Super Regionals against the North Carolina Tar Heels, the only thing left was one final college baseball game in Chapel Hill, North Carolina to earn a spot in the CWS. And it happened.

Thanks to a 13-run first inning, one that saw 17 Tigers at the plate and lasted nearly an hour, Auburn got hot when it absolutely mattered most and pounded the Tar Heels 14-7 at Boshamer Stadium to be Omaha-bound for the first time since 1997.

If there was ever a reason for Auburn fans to roll Toomer?s Corner after the school year ended, this would be the time.

Here?s how the epic first inning in the Chapel Hill Super Regional went down:

The top of the first inning was a marathon, a painful one that saw UNC use pitchers Joey Lancellotti, Connor Ollio, Hansen Butler and Will Sandy before finally getting out of it.

That was quite the cushion for Auburn starting pitcher Tanner Burns, who threw two scoreless innings before Richard Fitts (5-3) got the win in Game 3 of the NCAA Tournament.

13 SPOT!!@TannerBurns_7 trots out to the bump with a cushion.

From a 14-16 SEC record and an early exit in the SEC Tournament to a berth in the College World Series is a legendary story. The Tigers made it happen, and there?s no signs of head coach Butch Thompson?s team slowing down now as they head to NCAA baseball?s grandest stage.