There isn't a rivalry in college sports fueled with as much hatred as Duke and North Carolina. Sure, I'll give credit to Ohio State and Michigan, Alabama and Auburn, Notre Dame and USC and Oklahoma and Texas come football season, but none compare to Duke and UNC on the hardwood.

Similar to most rivalries, the Blue Devils and Tar Heels hate each other out of sheer proximity. The two universities are roughly seven miles apart, connected by the famous Tobacco Road. Couple the short distance with the fact that Duke and North Carolina are two of the most successful college basketball programs ever--and the fact that each time they play usually has national implications--and it's no wonder each team claws for superiority.

Of course, a rivalry of this magnitude will have several notable characters. Michael Jordan, Jerry Stackhouse, Johnny Dawkins, Christian Laettner, Bobby Hurley, J.J. Redick, Tyler Hansbrough, Ty Lawson, Marcus Paige, Vince Carter, and Zion Williamson are a few. But there's a player who precedes these legendary figures who took the rivalry to a new level. 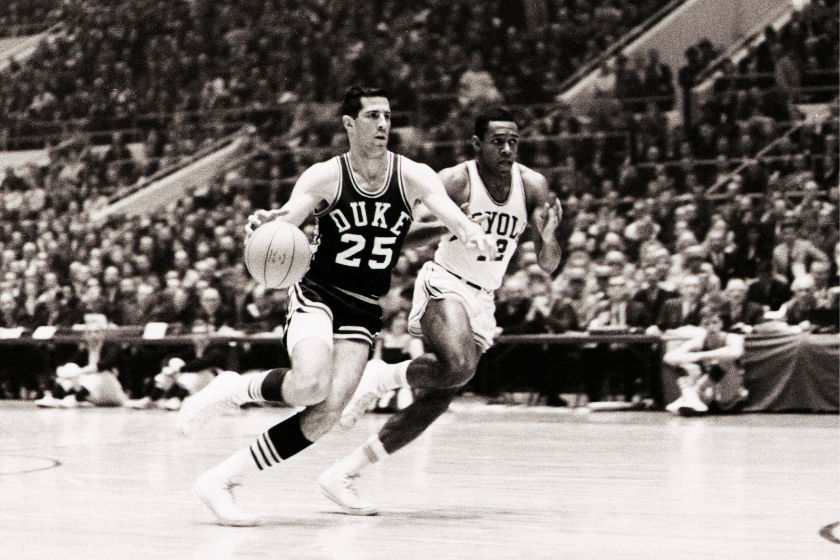 Heyman, a New York City native, had every college basketball program in the country clamoring for his services in 1959. He originally committed to play for Frank McGuire at North Carolina, but his recruitment wasn't all roses. McGuire and Heyman's stepfather reportedly got into a shouting match during one of his visits to Chapel Hill.

"[Bubas] charmed my mother and stepfather," Heyman said, per WRALSportsFan. "They made me go to Duke. All my friends from New York were in Carolina. If Duke hadn't picked me up at the airport, I would have gone down the road (to Chapel Hill) and started school there."

Art's change of heart naturally put a target on his back for UNC. He could've flipped anywhere, but Duke? Now he was Chapel Hill's Public Enemy No. 1.

The Tar Heels let him know, too. Each time Heyman stepped on the floor against UNC, there was some sort of incident. In his first year on the freshman team, North Carolina freshman Dieter Krause attacked Heyman, which led to a brawl between the two teams where the coaches had to be restrained.

The next season, when Heyman was playing with the varsity team, he pushed over a fan who he assumed was attacking him. Then, with Duke trying to hold onto a small lead, he committed a hard foul against UNC guard Larry Brown--yes, the same Larry Brown who's coached everywhere and has a national championship and NBA title to his name. Brown retaliated by throwing the ball at Heyman and then threw a punch at him. The ordeal escalated into a bench-clearing brawl that lasted about 10 minutes. Heyman, Brown, and Donnie Walsh--yes, the same former NBA executive Donnie Walsh who was a reserve for UNC and personally attacked Heyman--were all suspended.

As you can see, the Tar Heels took it well. It also didn't help that Heyman was a stud.

The 6-foot-5 forward averaged 25.1 points and 10.9 rebounds in his three years on the varsity squad. He also earned every accolade under the sun:

The New York Knicks went on to select Heyman with the No. 1 overall pick in the 1963 NBA Draft, too.

Duke and North Carolina would've been heated regardless if Heyman had stuck to his original commitment. But flipping to Duke escalated it to a disdain that led to physical altercations twice. He was the embodiment of UNC's hatred for the Blue Devils.

And to think, he was this close to wearing Tar Heel blue.