Even on Cinderella's best day, the story ends with Cinderella and the prince finally reuniting. An assurance of the rest of their lives summed up to the audience in three words: "happily ever after." That is the goal of every Cinderella Story to even be written during March Madness.

In a particular timeline, of which you and I are a part, this "happily ever after" is playing out in the front office of the Boston Celtics, in the career of President of Basketball Operations Brad Stevens. 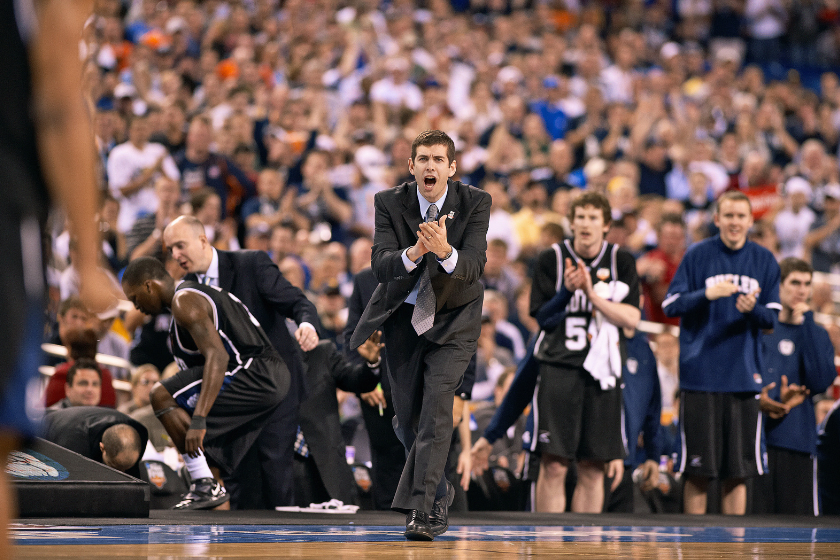 Stevens took the spotlight commanding the Butler men's basketball team on consecutive underdog runs through the NCAA college basketball Tournament in 2010 and 2011. In contrast, most coaches use such an achievement to move to a bigger school, maybe their alma mater. Stevens, who's never really utilized the proverbial "baby steps" in life, has since catapulted himself to chief-operating the personnel of an entire NBA franchise in a little over ten years.

Even today, almost any mention of Brad Stevens comes with the same descriptor - his age. We do this all the time; we do it with players when they are old. "44-year-old Tom Brady," or "37-year-old LeBron James." We do it to coaches when they're young. During the NFL Postseason in 2022, it was: "Sean McVay, the 36-year-old coach of the Rams."

We say it like it really matters, even with Brady and McVay winning the last two Super Bowls, Brady with the Tampa Bay Buccaneers and McVay with the Los Angeles Rams.

Before Sean McVay and Zac Taylor of the Cincinnati Bengals, there was Brad Stevens. Like Stevens, you will seldom hear mention of McVay or Taylor without the year-old prefix. When everyone else was focused on playing only to pursue coaching after, Stevens was hell-bent on coaching right from the start. Like many of the new wave of young NFL coaches. 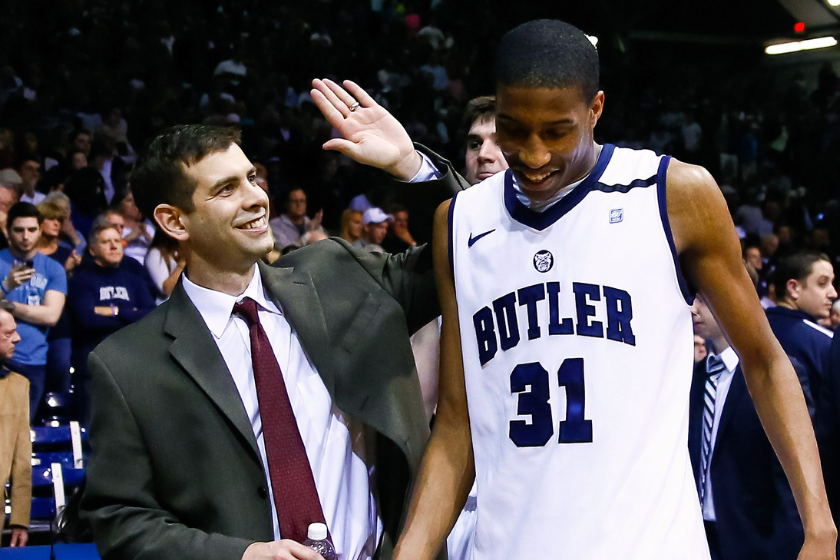 OK, maybe not right from the start. Stevens did, in fact, play, as a small-town star player in high school in Indiana and was even a decorated player for DePauw University.

That's DePauw, not DePaul.  Kind of like how it's Stevens, not Stephens.

He even played then moved on from it completely. After several years working for Eli Lilly & Company, Stevens came to a fork in the road. In one direction was the beaten path he'd been on, with a desirable salary and opportunities to advance and a blanket of security for him and his family. In the other direction was the path less taken. A chance to volunteer on the basketball staff at Butler University, a Division I School in Indianapolis, but one requiring a move and offering no initial compensation.

Easy one, right? For Brad Stevens and his girlfriend Tracy, it was. They decided that to risk either one of their happiness would ultimately prove untenable. If Stevens felt that life back on the hardwood (this time on the sideline) was what he really wanted, he had to pursue it.

Stevens took the job in the summer of 2000. In 2007, he was named the Butler Bulldogs head coach. He was 30 years old. In 2013, he signed for $22 million to coach the Boston Celtics. The Boston Celtics. Not bad for a kid from Small Town, Indiana....wait, doesn't this sound familiar?

The fact is that Stevens' rapid ascent to the reins of an NBA franchise did not begin with back-to-back Cinderella runs as Butler coach. In fact, it is somewhat misleading to associate Stevens' Butler teams with the Cinderella concept. Stevens won 30 games in his first regular season. In six seasons with Stevens at the helm, the Bulldogs averaged over 27 wins. They played in four consecutive NCAA tournaments representing the Horizon League, even with an at-large bid in 2009.

Though his winning ways spoke for themselves, they didn't speak very loudly. But that's what Gus Johnson was for.

The runs his teams made in the 2010 and 2011 NCAA Tournaments did do the necessary trick of putting the spotlight on him. But even for March Madness, the Cinderella tag was almost a misnomer.

Stevens's teams were too good for that. 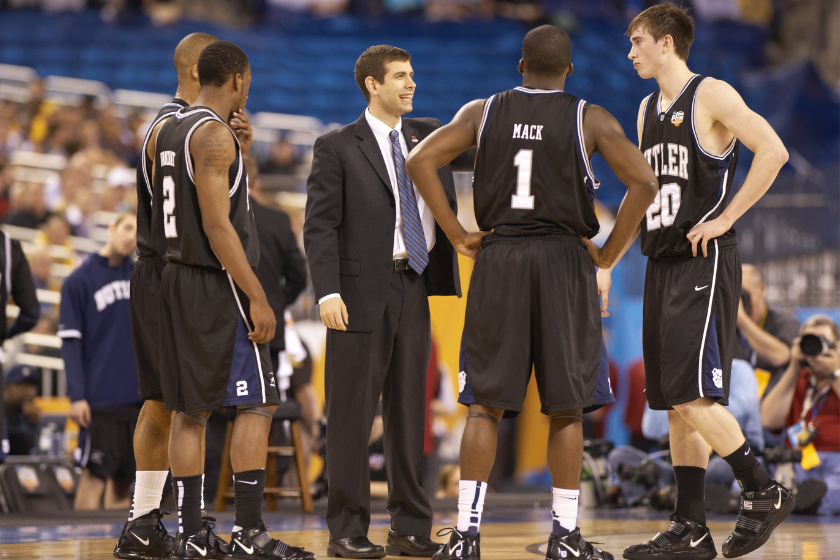 In the 2010 run, Butler hoops was a 5-seed. Only two of their five wins came against a higher seed. In 2011, as an 8-seed, they defeated three higher seeds in Pittsburgh, Wisconsin, and Florida. In the Final Four, they actually faced a fellow, even lower-seeded Cinderella in 11-seed VCU.

In all his time coaching the Bulldogs, Stevens saw two NBA players come through the program in Gordon Hayward and Shelvin Mack. Mack spent several years playing meaningful minutes for Atlanta and Utah. Hayward has played for Utah, Boston, and Charlotte, signing with the Hornets in 2020 for $120 million.

Lacking in recognizable talent, Stevens's Butler teams were always regarded for their toughness, connectedness, poise under pressure, spectacular defensive play, and high basketball IQ, qualities that were all credited to the intelligence and personality of their head coach. The Butler Way, as it has become known, emphasizes these qualities to every student.

Overall, Stevens's Butler teams went 12-5 in NCAA Tournament play. His team saw their runs end twice at midnight. In an all-timer title game, they lost to Mike Krzyzewski's Duke Blue Devils, almost clinching the victory on a Hayward buzzer-beater. And then they lost to Big East giant Connecticut in the National Championship game the following March in one of the worst. In the latter NCAA Championship, Butler had a two-point lead going into halftime, only to drop the second half as UConn outscored the Bulldogs, 34-19.

But Stevens' teams made such an impression that Prince Danny Ainge (an aggressive NBA executive with no fear and eyes on the future) picked up his slipper and sought him out two years later.

So, while it's impossible not to project what the players we're watching this March will do at the next level, we should also consider what's next for the coaches of this year's Cinderella contenders.

They are guys who you didn't know before but that you certainly know now.

The Stevens' Cinderella Blueprint Continues to be Utilized

Iowa State coach TJ Otzelberger has gone from South Dakota State to UNLV to being given the reins of a Cyclone squad this season, a team that finished 2-22 in 2020-21. After making a splash by guiding the 11-seed Iowa State into the Sweet 16, it's sure to be the case that Otzelberger will be lured away to an even higher-level program.

And then there's Shaheen Holloway, head coach of the Saint Peter's University Peacocks. Holloway, who had his own signature moment in the NCAA Tournament in 2000 as the point guard on 10-seed Seton Hall. The Pirates made the Sweet 16, sparked by Holloway's last-second game-winner to beat Oregon in the First Round.

Now, Holloway is back, leading Saint Peter's past 2-seed Kentucky and 7-seed Murray State. Awaiting the Peacocks in the Sweet 16 is 3-seed Purdue.

And whether they advance any further or not, awaiting Shaheen Holloway is undoubtedly a job promotion.

And in case you were wondering, Otzelberger is 44, and Holloway is 45.

In 1983 Jim Valvano, while coaching at N.C. State coined the phrase "survive and advance" to describe his team's mindset. For the coaches of NCAA Cinderellas, "advancing" doesn't have to mean winning the game.